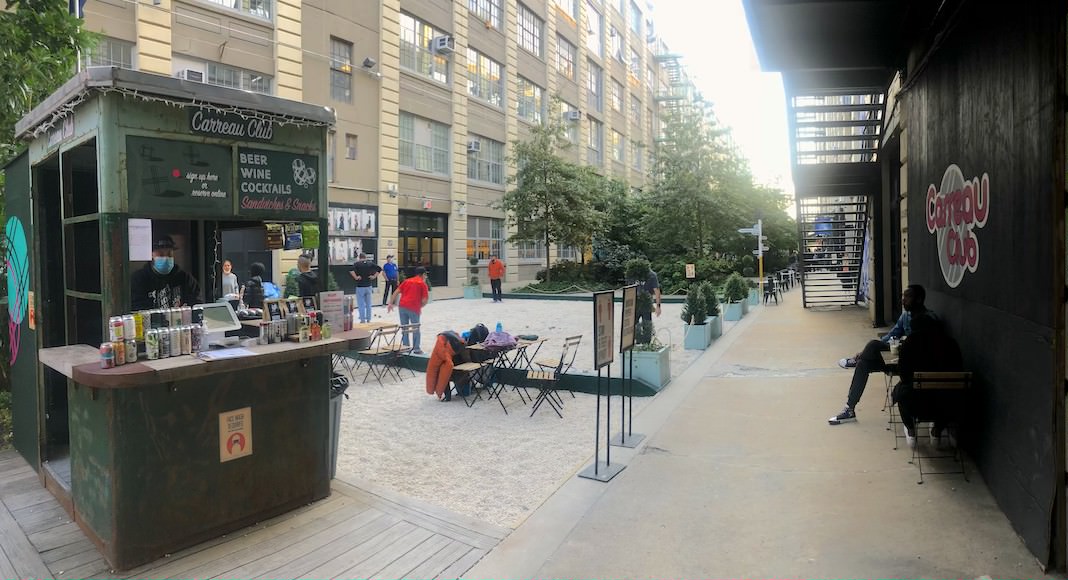 It feels like stepping into the south of France. Hidden between 34th and 35th street, between two buildings of Industry City in Brooklyn, a tree-lined terrace awaits you with a bar and four brand new pétanque courts. It is here that two Americans, Aaron Weeks and Dana Bunker, opened The Carreau Club on August 28th, New York’s first pétanque bar.

“I worked for a long time for a French-inspired restaurant called M.Wells on Long Island, whose chef and owner, Hugue Dufour, is from Quebec,” says 39-year-old Aaron Weeks. “I had never heard of pétanque before. I helped him seven years ago to organize small tournaments on the MoMA PS1 court on Sundays, which quickly attracted people, including some of the best players in town,” recalls the creator of the Carreau Club. Among those drawn to it, was a 52-year-old association, the New York Bowl, whose players practice daily in Bryant Park. “We became very good friends with Hugue, and became more and more obsessed with pétanque. It’s the ideal sport for people who work in the restaurant business, who need to take the pressure off after a shift.”

Faced with this growing passion, Aaron Weeks decided to launch his own establishment, 100% dedicated to pétanque. “I thought that we should create a place with an interior and an exterior to be able to play all year round, and which can accommodate both passersby who don’t know this sport, and leagues for seasoned players.” For the moment, only the outdoor part of the Carreau Club is open to the public, but the atmosphere is already vibrant. During our recent visit, we could see Weeks, in the role of teacher, explaining the rules and fine points of pétanque to curious passersby, and convincing them to play a game. The courts are never empty in the evening. “pétanque for me is the equivalent of bowling for Americans. The idea is to bring them something new but in the same style.”

Weeks also wanted to show us what will soon become a huge indoor complex of nearly 6,500 square feet. “We had to delay the project because of the Covid-19. When the construction is finished, we will have six plots of land on the left, a bar-restaurant on the right whose map will be prepared by Hugue, separated in the middle by a lounge area where you can sit down and have a drink,” he comments. “We hope to open in spring/summer 2021.”

In the meantime, the American entrepreneur plans to launch an outdoor league next month, since his fields are lit. “We also hope to have heat lamps soon,” he adds. Eventually, Aaron Weeks dreams of organizing a “New York Open,” a big tournament that brings together the best players in the country. “It’s a niche sport but there are about 4,000 competitive players in the US who compete every year in a big tournament in Florida. We could do the same thing here.”

The Carreau Club is open weekdays from 3pm to 9pm, and weekends from 12pm to 9pm. Count only $20/hour for the reservation of a court per team of three players ($7 per person). No pastis on the menu, but there is a large selection of local beers, sandwiches and snacks.