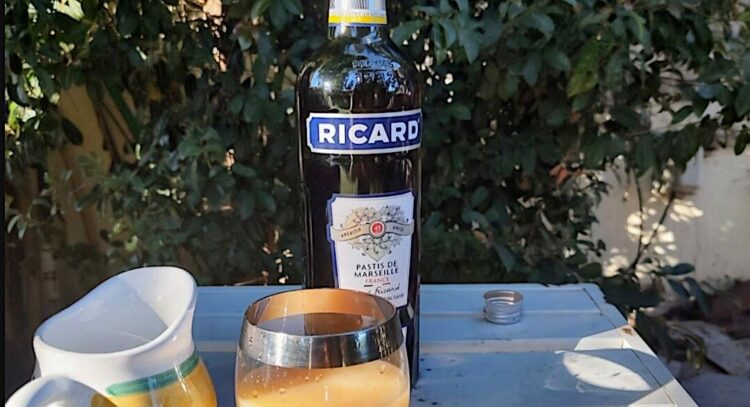 If you hate the taste of licorice, read no further. But if you love it, as I do, you’re in boozy, liquid luck: Pastis is a decadent and deeply refreshing aperitif suited for lazy, hot afternoons in the shade of a plane tree, sprawled on a chaise-longue, post-swim, post-sail, with nothing more strenuous to do than to watch other people play a game or two of pétanque.

Made from base alcoholic spirits infused with herbs, Pastis, the name for which is the Occitan (Catalonian) word for mash-up, mixture and porridge, is a deceptive and potent drink. Poured straight from the bottle into a glass, an innocuous amber color, it looks innocent enough.

But add a dash or dollop from the little pitcher of cool spring water it’s served with, and its true nature reveals itself: as the water interacts with the licorice oil, the pastis turns a cloudy yellow. This alchemical process is called louching, the perfect word: the clear liquor turns a rakishly opaque Toulouse-Lautrec ochre as the water emulsifies with the licorice oils.

Take a sip: it’s oily and intoxicating, spicy rather than sweet, with an intense anise flavor. It’s meant to be sipped slowly, its fumes breathed in, its richness savored.

In fact, speaking of louche, Pastis is a direct descendant of absinthe, that “green fairy” which was banned in 1917 for being too dangerous to drink, as it contained both toxic wormwood and nearly 72% alcohol. French drinkers tended to swill it like wine, so the government banned it for their own good. But the people sorely missed their toxic tipple, so in 1932, when the aniseed-liquor ban was finally lifted, a 23-year-old salesman named Paul Ricard invented an acceptable and less-alcoholic substitute.

Strongly flavored with star anise and licorice root, in the tradition of Greek ouzo, Levantine arak, and Italian sambuca, Pastis has become a staple of southern France, sipped in the golden summer afternoons. In Marseille, the city it’s most associated with, it’s been given all sorts of affectionate nicknames, like pastaga, rifflon, ricou, as well as jaune, for its color. 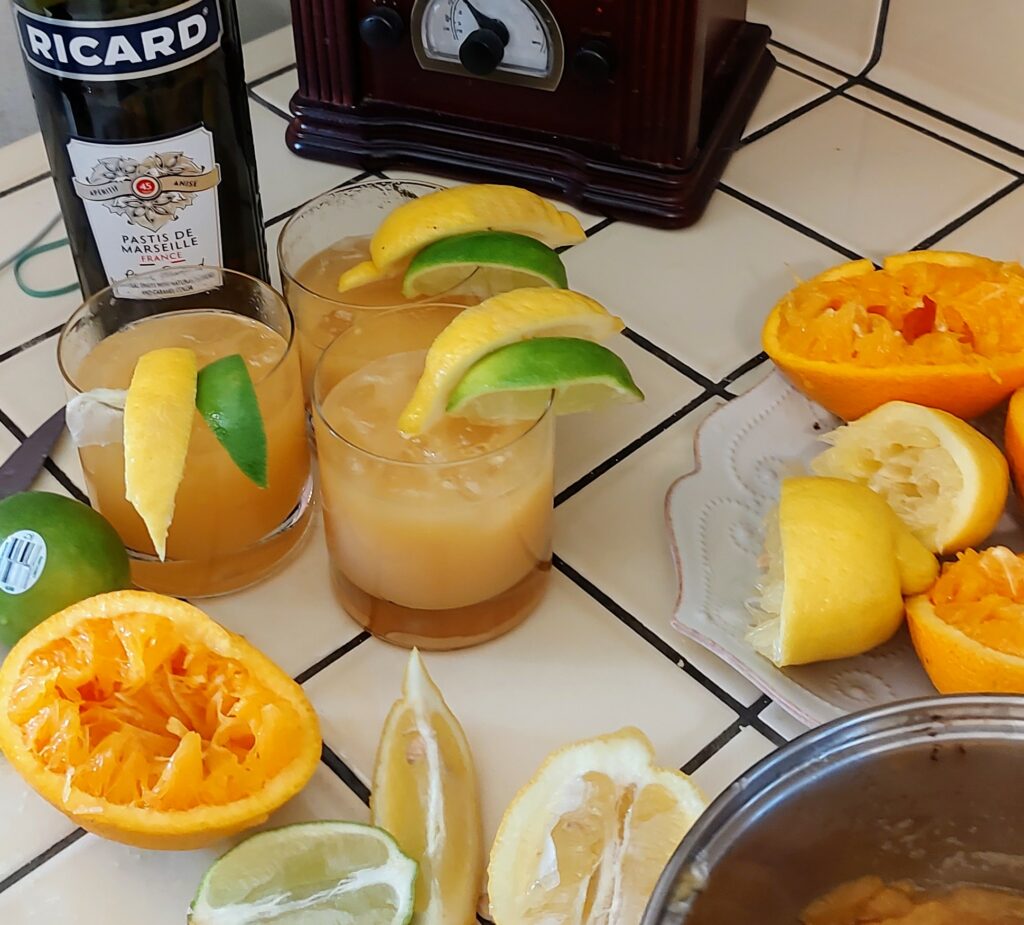 As an avid liquid-licorice-liqueur fan, I’ve always drunk Pastis as a summer aperitif, sipping a glass while I cook dinner on a hot evening, neat with water, no ice. You, however, are free to add a cube or two if you like, and many do. You’re also free to mix it with flavored syrups, because the strong flavor of Pastis plays surprisingly well with others. With strawberry syprup, it’s a Rourou. A Tomate is Pastis and grenadine, a Perroquet has green mint syrup, and a Violet is, of course, mixed with lavender syrup. Mixed with both green mint and grenadine, you’ve got a Feuille Morte, or dead leaf.

And, if you can get your mitts on some orgeat syrup, which is made with almonds and rose or orange blossom water, you can have yourself a Mauresque. The one I’d be most likely to try would be a Romarino, with rosemary syrup—or, of course, a sazerac, that fantastic elixir of Pastis and a dash of cognac or rye whiskey.

Choosing your brand of Pastis is fairly easy; they’re all good. Of course, you can opt for either Ricard or Pernod, the tried-and-trues, and why not? But there are a number of lesser-known artisanal Pastis options made with a variety of botanicals, the most popular of which, Henri Bardouin, is made with 65 different herbs and spices: besides star anise and licorice, these include cardamom, rosemary, sage, mugwort, Tonka beans from Guyana, and “grains of paradise” from the Great Lakes region of the U.S. (You might have to go to France to get Bardouin, but something tells me it would be well worth the trip.)

Or you can make your own Pastis at home, using vodka as a base, adjusting the flavors to your own liking. Grind your herbs and spices with a mortar and pestle, put them into a jar with a tight lid, pour a cup and a half of vodka over them, seal the lid, and shake. Let it steep for a few days to a week, shaking it once or twice a day to wake up the flavors. Then boil 1/3 cup sugar and ½ cup water to make a syrup, and let it cool while you strain the herbaceous vodka through a fine-mesh strainer to remove all sediment. Add the simple syrup, shake well, and store your pastis for a few more days before you drink it.

The DIY Pastis recipe on the Serious Eats website recommends the following amounts: 10 pods of star anise, one tablespoon of licorice root, 1/2 teaspoon of fennel seeds, ¼ teaspoon of coriander seeds, ½ teaspoon anise seeds. You can play with these proportions, add rosemary or sage, or hell, grains of paradise if you can find them. There are no hard-and-fast rules here.

Homemade Pastis won’t louche when you add water unless you add licorice oil, which is expensive. But it’s excellent as a cooking spirit, substituted for white wine in seafood dishes: baked fish with Pastis glaze; roasted fish with a side of Pastis mayonnaise; pan-fried fish with a Pastis and caper butter sauce. It would be delicious in a bouillabaisse, sublime in a fish pie. 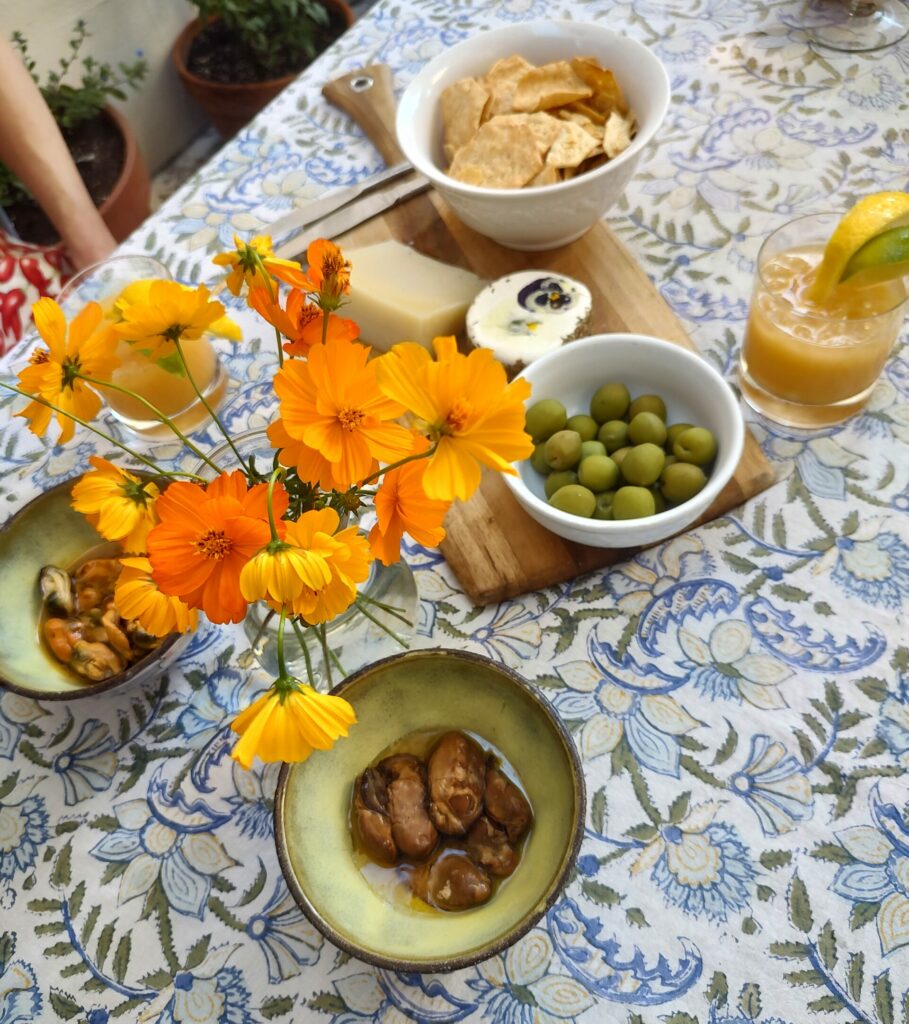 Meanwhile, as summer heats up, lay in a bottle or two of Pernod and delight your friends with a steamy-afternoon apéro: a round or two of Nicois Cocktails, Pastis shaken with citrus juice and peach syrup over ice. I would serve them with a tray of smoked oysters and mussels, Picholine olives, crispy sea salt crackers, and two or three goat cheeses—plenty of brine and salt to balance the fruit and spice of this zesty drink. Afterward, let your guests cook dinner while you savor the post-sunset breeze.

With a mortar and pestle, roughly break up anise, licorice root, fennel, coriander, and anise. Add them to a sealable glass jar along with vodka. Seal and shake, then let steep for 5 days at room temperature away from direct sunlight, shaking occasionally.

Boil sugar and water together until integrated into a light syrup, about 7 minutes. While the syrup is cooling, strain the spices out of the vodka mixture through a cheesecloth lining a fine-mesh strainer. Strain twice if necessary to remove all sediment.

Once syrup is cool add it to the strained vodka infusion and shake. Let rest for 4 days or more before use. Store at room temperature for up to 4 months.

Ingredients for a single glass:

Shake over ice, pour, and garnish with lemon and lime wedges. Santé! 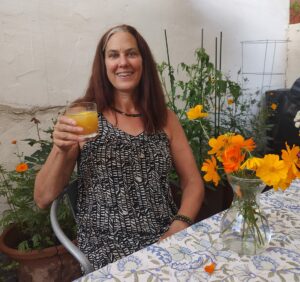 Kate Christensen is a novelist, memoirist and food writer based in Taos, New Mexico. This essay is the fifth in a monthly series about French food called Bouffe, created and written exclusively for Frenchly by Kate Christensen. Her books, Blue Plate Special, How to Cook a Moose, The Last Cruise and more can be purchased here, on Amazon. Her next book, a novel, will be published in 2023.

All photos courtesy of the author. 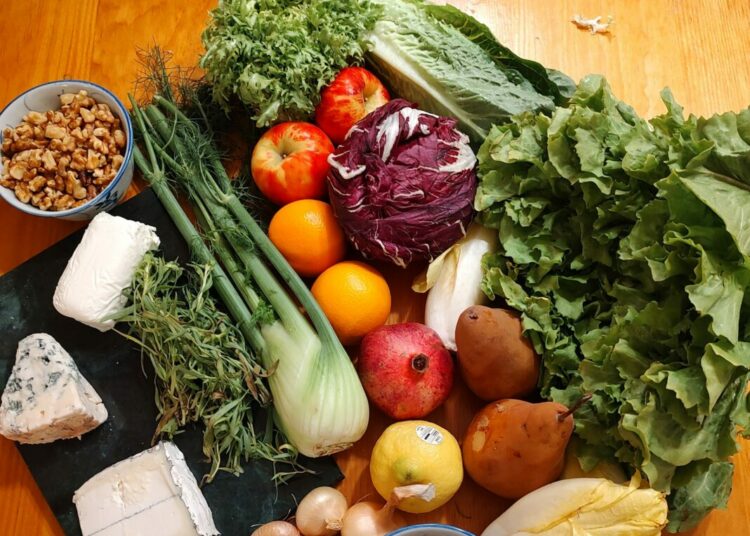