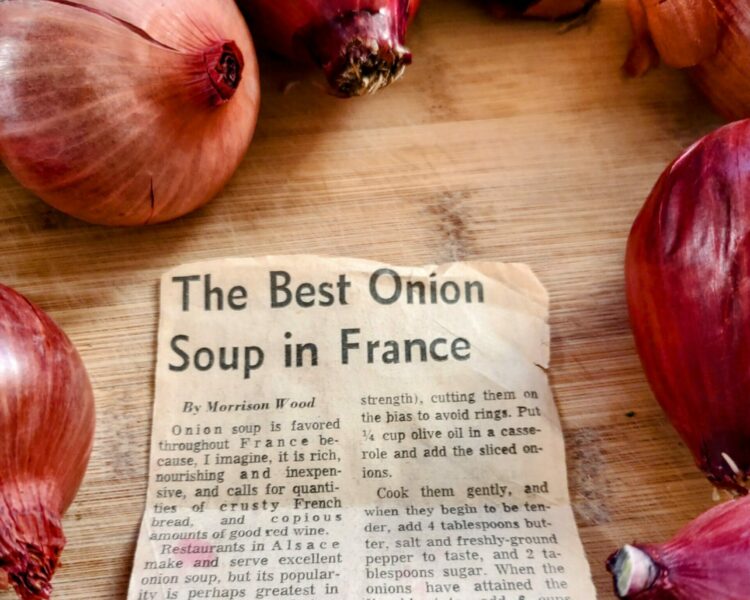 My father died exactly a year ago today, in California, at the age of 97. I didn’t learn he’d died until a couple of months later, when I googled him, on a hunch, and found his terse, two-line obituary. Shortly after this, I heard from his widow, Michele. “It’s time to open this family up,” she wrote. “I’ll tell you anything you want to know about your dad.” I leapt at the offer. They were married for thirty-two years, and she knew him better than anyone.

In addition to allowing me to know my mysterious, absent dad in a way I never could when he was alive, Michele generously sent me a manila envelope thick with the recipes he had collected through the decades during their marriage, about 100 in all. “Your father loved to cook,” she told me during one of our long phone conversations, “but he had a habit of wandering away from the stove, so I had to keep an eye on him.” Most of my father’s favorite recipes are written in his tiny crabbed handwriting on post-its, and I’d need a magnifying glass to read them.

Only one of his recipes was cut out of a newspaper, Michele guessed from the San Francisco Chronicle, sometime in the 1990s. It happened to be a recipe for the exact dish I had been planning to make this month for this column. And it was called “The Best Onion Soup in France.” How could I resist?

To add even more layers of serendipity, the article’s author, the cookbook writer Morrison Wood, got the recipe from the chef of a “quaint hucksters’ bistro” in Paris called “Au Pere Tranquille.” Let me just say here that my father, to put it mildly, was not exactly a tranquil father. He was a complicated father until I was 11, and then he was gone, out of my life forever except for brief cameos, instigated by me, about once every fifteen years. I wonder if he would appreciate this mild irony as much as I do.

Wood makes it clear in the article that he went up and down les Halles and environs eating all the onion soup to be had in every restaurant. And this one, hands down, was his favorite. So of course I had to make it, even though this recipe is odd in a couple of ways. First of all, it calls for all red onions, which I balked at—really? No white or yellow onions at all? And you have to ladle the soup over the toasted and broiled cheese bread instead of running the entire bowl of soup under the flame to melt into an oozing, cheesy mess, which to me is the point of this dish.

But no matter: I was on a mission. 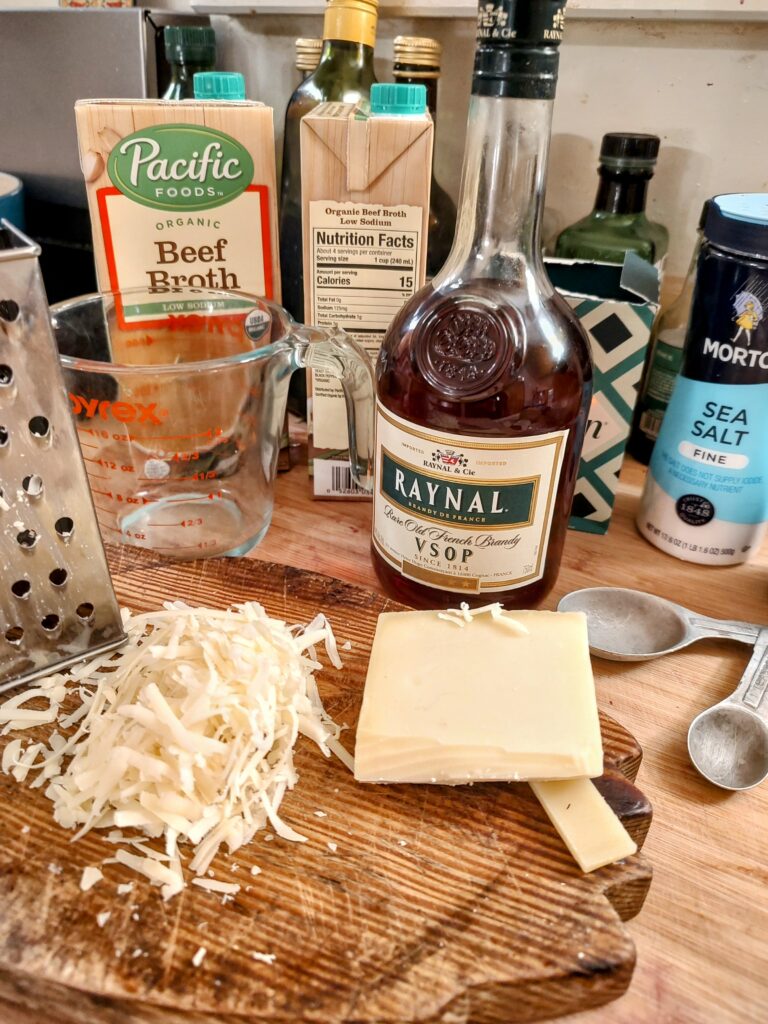 So I gathered butter and olive oil, Gruyere cheese, beef broth and brandy, sugar and salt and pepper. While a loaf of quick artisanal bread baked in one of my Dutch ovens, the mass of sliced red onions cooked down in the other. I let the onions delicquesce for a solid hour over low heat—softening them, but not caramelizing of charring them, as per Wood’s recipe, which I followed to the letter. I imagined my father doing the same thing, once upon a time, and as I cooked, I talked aloud to him: “What a crazy recipe! I hope it works,” and “Did you wonder about adding the sugar, too?” 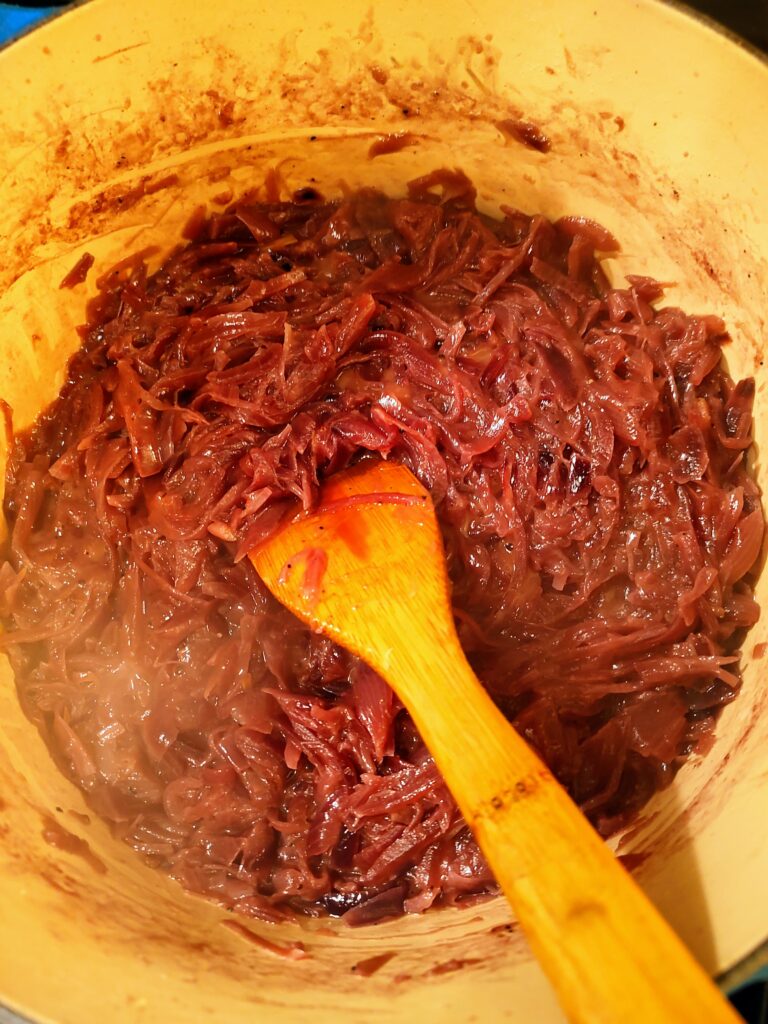 When the soup was done, I set out two bowls with one thick, toasted, gruyere-covered, broiled slice of artisanal bread in each. Brendan and I sat down to this rich, simple supper with candles lighted. I raised my glass of fizzy water and toasted my father, and then we ate the soup. It was sweet and beefy, with added depth from the brandy, and the red onions, as Morrison Wood had promised, provided a strong, good flavor. 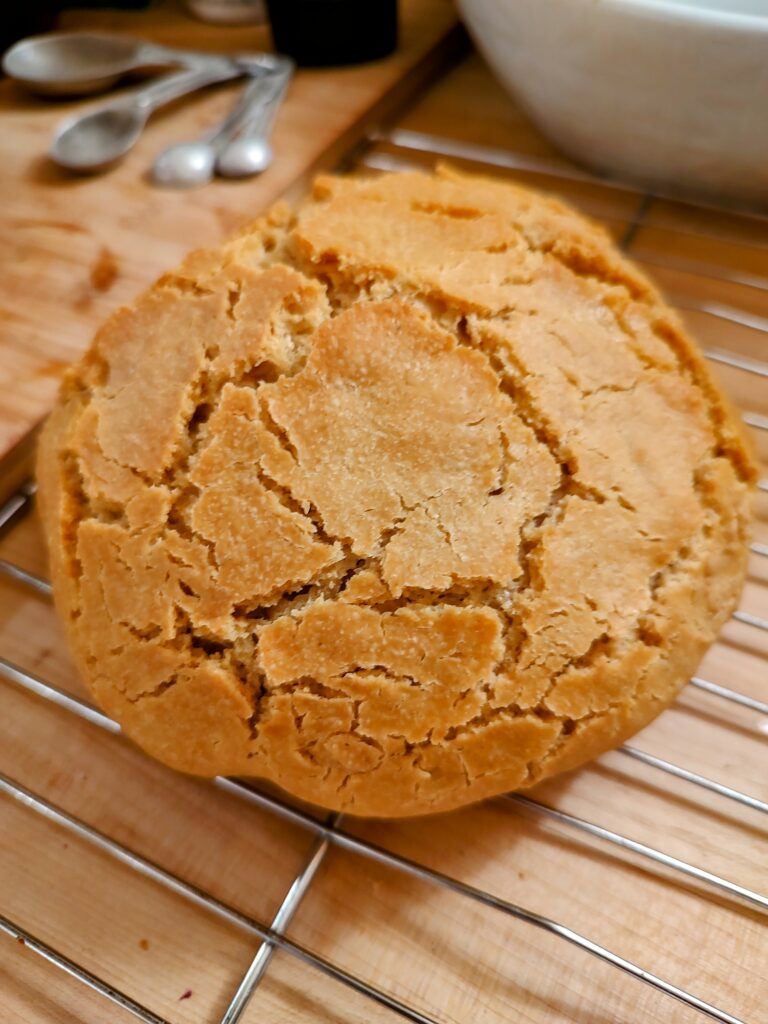 I don’t know whether my father ever made this recipe or not. It has no food splotches on it, like some of his other recipes. But as a side note, I didn’t get any splotches on it either, so I’ll never know for sure.

But now that I’ve made it, I recommend that you do, too. 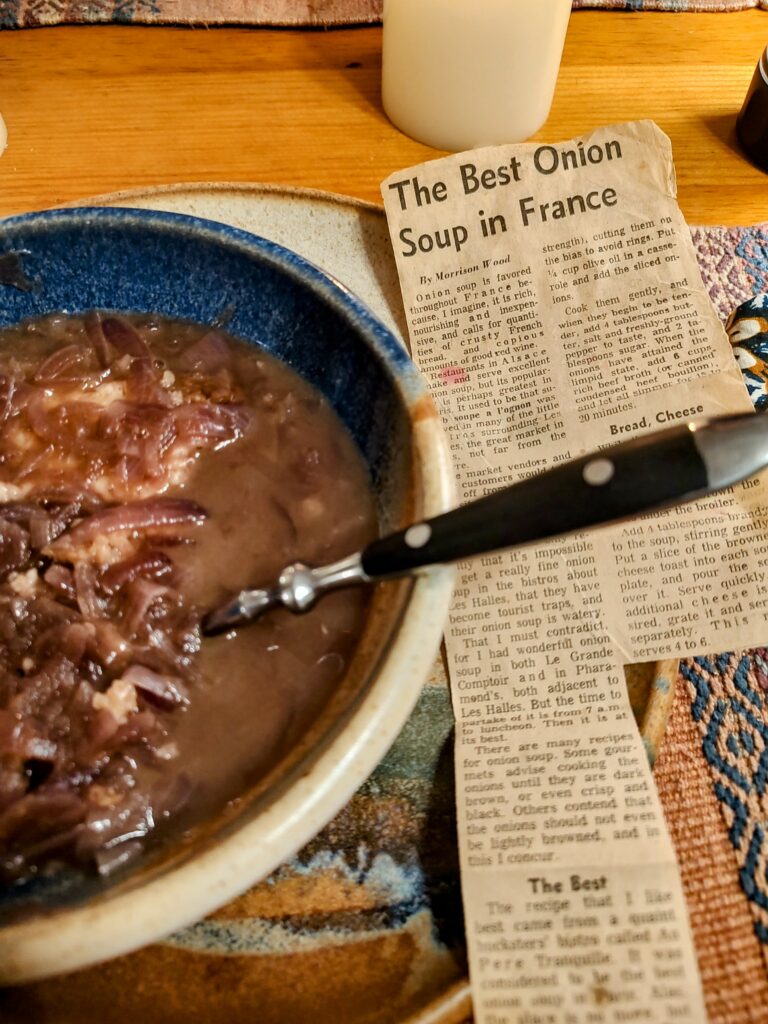 The Best Onion Soup in France

Peel and slice thinly 12 to 16 (depending on size) red onions (red ones make for strength), cutting them on the bias to avoid rings. Put ¼ cup olive oil in a casserole and add the sliced onions.

Cook them gently [for 15 to 20 minutes], and when they begin to be tender, add 4 tablespoons butter, salt and freshly-ground pepper to taste, and 2 tablespoons sugar. [After another 45 minutes], when the onions have attained their limpid state, add 6 cups rich beef broth (or canned condensed beef bouillon), and let all simmer for 15 to 20 minutes.

While the onions are simmering, toast and butter slices of French bread and sprinkle them with plenty of freshly-grated Parmesan (or grated Gruyere) cheese. Lightly brown the slices under the broiler.

Add 4 tablespoons brandy to the soup, stirring gently. Put a slice of the browned cheese toast into each soup plate, and pour the soup over it. Serve quickly. If additional cheese is desired, grate it and serve it separately.  This recipe serves 4 to 6.

Kate Christensen is a novelist, memoirist and food writer based in Taos, New Mexico. This essay is the ninth in a monthly series about French food called Bouffe, created and written exclusively for Frenchly by Kate Christensen. Her books, Blue Plate Special, How to Cook a Moose, The Last Cruise and more can be purchased here, on Amazon. Her next book, a novel, will be published in 2023. 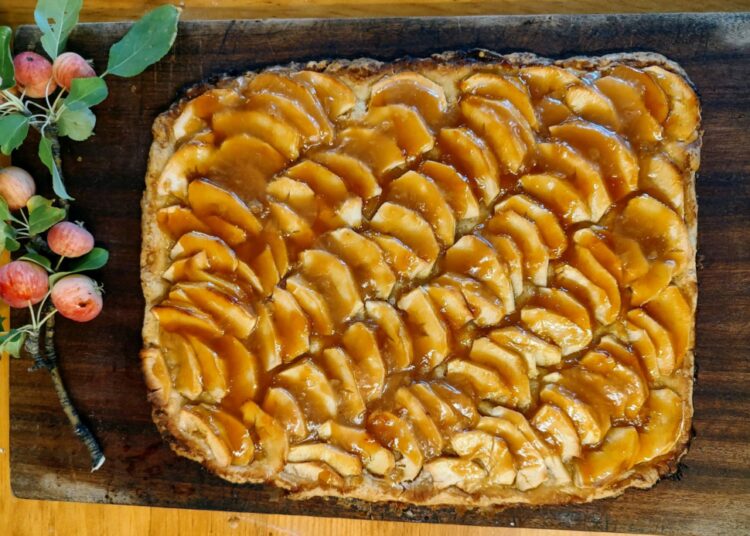 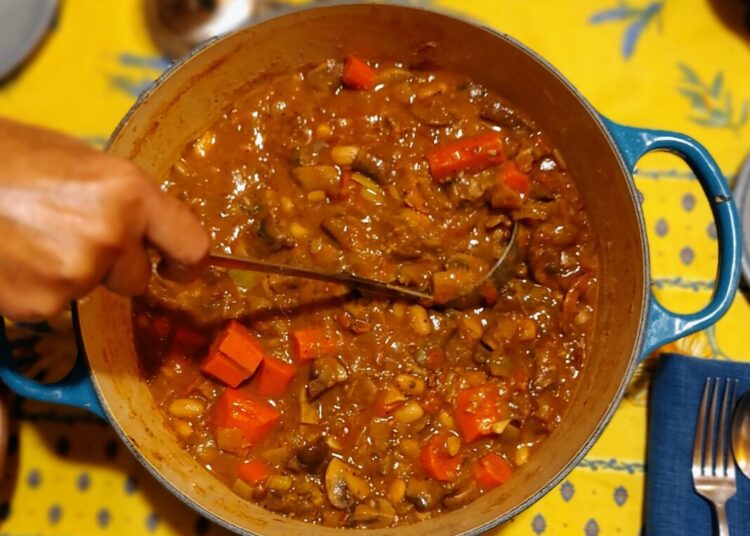 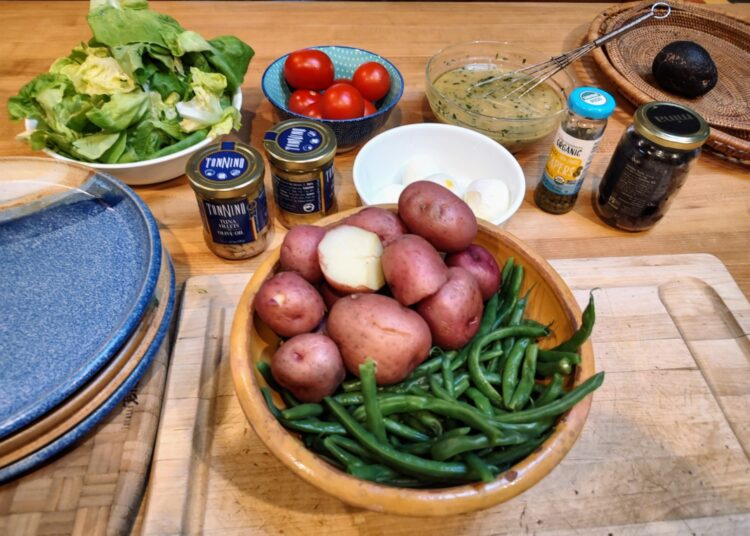 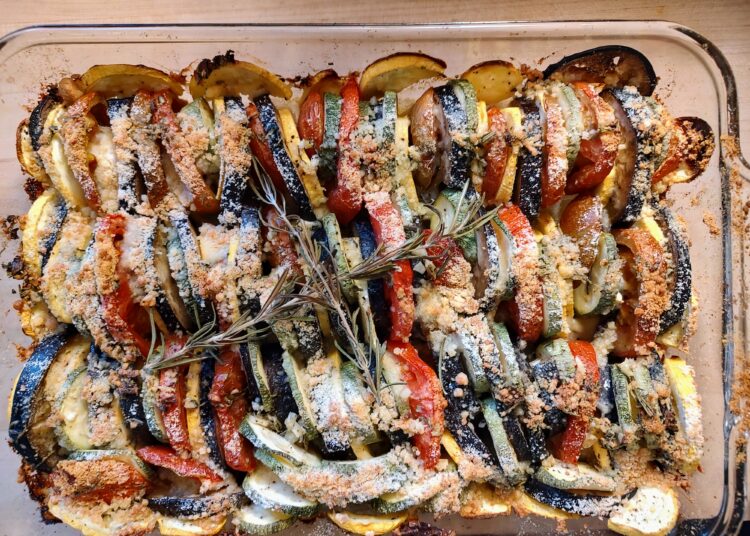 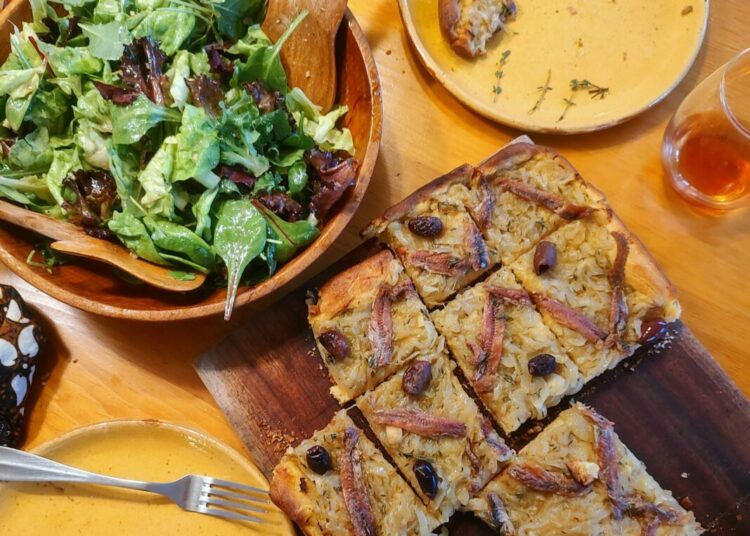 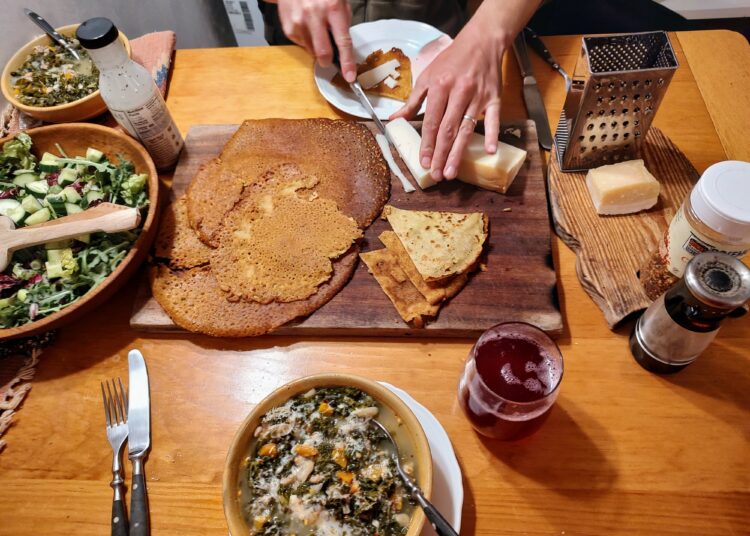