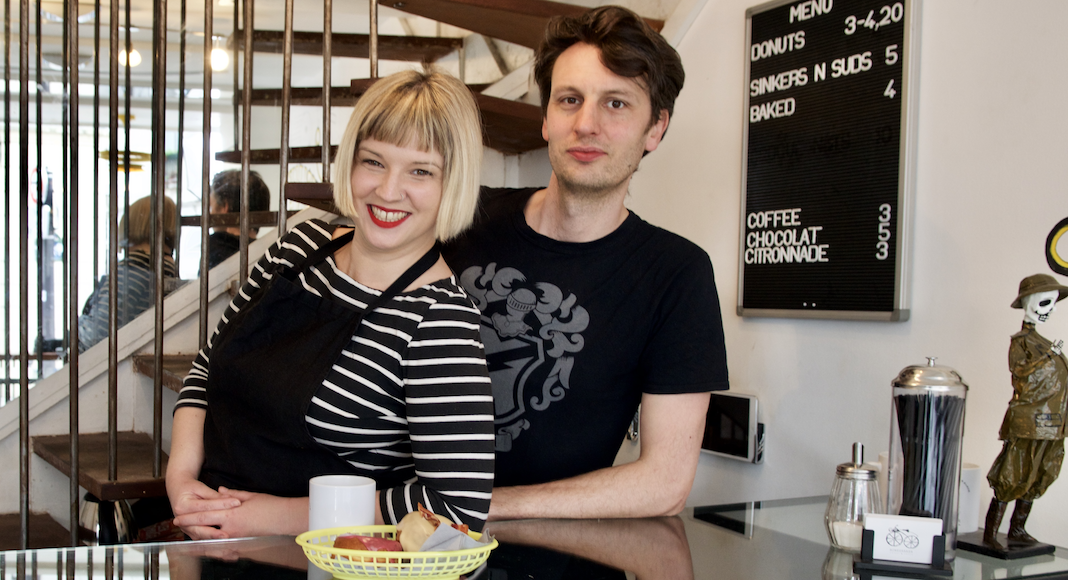 Boneshaker Doughnuts: Finding Success in the Land of Pastries

Archimedes had his Eureka moment while taking a bath. For Amanda Bankert of Boneshaker Doughnuts, Paris’ first real doughnut shop, it happened while eating just that — a doughnut. “It went something like ‘Oh, I wish we could get these at home’…and then, all of a sudden, ‘Wait! We could open a doughnut shop!’”

Paris and nowhere else

Becoming the Paris doughnut whisperer wasn’t Bankert’s initial plan. She’s a pastry chef with training in classical French technique, and her Irish husband Louis Scott has nearly two decades of front-of-house experience throughout Paris. They knew one thing: they would open a place together in Paris, a city Bankert “fell in love with within two days of being here” as an exchange student from Sarah Lawrence.

“We decided to do doughnuts because you just couldn’t get them here,” Bankert explains. Boneshaker Doughnuts, located on chic-but-just-gritty-enough Rue d’Aboukir in the second arrondissement, opened its doors in July 2016.

Boneshaker expertly blends the comfort of an American classic with a French touch. For Bankert, “doing American pastry was actually a big departure for me, but I ‘Frenchified’ it in my approach and the way we developed our dough recipe. Of course, it’s still a doughnut!”

Smiles, fresh doughnuts, and a way of life

Introducing doughnuts to Parisians more accustomed to cake au citron than cake doughnuts wasn’t all easy. “I just assumed everybody was going to love doughnuts because — how could you not love donuts? A French friend of mine said that no French person would eat that in the morning,” said Bankert. “When we first opened it was all goûters, and the funny thing is, now it’s equally French and Americans in the morning. We now get French people bringing boxes to the office!” Another obstacle for some clients was the long-standing stereotype that doughnuts are an industrial, unhealthy snack. For Bankert and Scott, quality is paramount in proving that doughnuts can be quite the opposite. Doughnuts are made by hand and fried in small batches on-site, all day long. “That’s how you actually want to eat a donut,” they both agree. “It needs to be fresh to be really, really good.”

The fact that Parisians have, overall, welcomed an American pastry in their rotation doesn’t come as such a surprise for Bankert. As a college student, she was amazed to find locals warm and very helpful — quite unlike everything she had heard about so-called French rudeness: “Not one person here has singled me out because I’m American,” she adds.

Running a business and living in France means speaking French all day long, but Bankert is still working on it becoming second-nature. She describes, “I still have to translate in my head sometimes, and I can’t switch automatically from one to the other just yet.” Despite this feeling, language doesn’t set her apart: Bankert has the very strong feeling that she fits in one hundred percent. As for starting a business in France, it’s all about becoming accustomed to a different yearly rhythm. Based on her experience, “in the summer you can’t get much done, it really starts slowing down in June… You either have to get everything done before Easter or wait until la rentrée, when everybody is super motivated.”

It does appear clearly that Boneshaker’s founders – and doughnuts – have found a home in Paris. Asking Bankert to pick a favorite doughnut is like choosing a preferred child, but with a little prodding, her love for caramel beurre salé, a true French classic, comes to light.

And what if Paris were a doughnut? Bankert smiles knowingly, taking the time to put her feelings into words. “Our Mae West doughnut, double-filled with pastry cream and rhubarb compote, and covered with a torched meringue. It’s quite chic-looking but you have your creamy, your messy, a little bit tart, and a little bit sweet, too.”