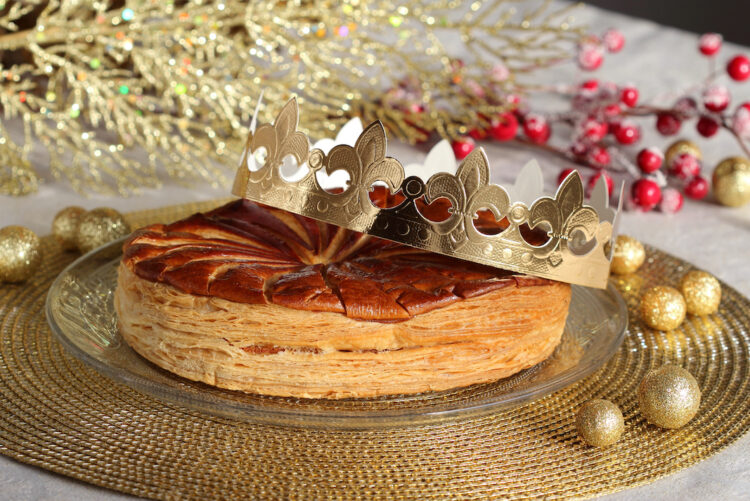 The holidays are over, and a new year is under way. For many of us, that means time for some resolutions for the next fifty-two weeks… or three weeks, or three days, depending on how long those resolutions actually last. On many a resolution-goer’s list is the diet—call it healthy eating, giving up refined sugar and white flour, coffee, wine or whatever you decide to name it: January is that time of year.

Unless you’re in France, that is. Sure, healthy-eating resolutions are everywhere, but that doesn’t mean anybody is holding onto them. In France, as in a number of countries around Europe, January is the month of Epiphany celebrations. Starting on the first Sunday of January, through January 6th, and then all throughout the month, the French celebrate the three Wise Men’s fêting of the baby Jesus by sharing cake.

And…it isn’t just any old cake. The most renowned of the Epiphany cakes is the galette des Rois, a decadent and golden-puff pastry pie filled with frangipane, an almond-based cream. Different regions, however, have their own “Kings Cake:” In the south of France, for example, the galette is replaced by a couronne des Rois, buttery brioche flavored with orange blossom extract and filled with a variety of candied fruit. Sounds pretty good, right? Imagine having it only once a year; what a shame! To remove any potential frustration, in France, Kings’ cake doesn’t have to be a one-time only occurrence. With family, you might indulge on the Epiphany itself, January 6th. Then comes la galette at work, where everyone wishes each other a happy new year with mouths full of almond cream washed down with hard cider. The next weekend, it’s time for galette with friends. Imagine repeating this over and over for a whole month.

In defense of the galette overload: It does give everyone a chance to taste variations from different bakers. Most importantly, however, is what hides within the rich almond cream inside the galette: la fève, or the “lucky charm” inside the cake.

Since Roman times, hiding a charm inside a cake meant to be shared has been a common tradition. In the Middle Ages came the custom of designating a king: the one who gets the charm. This turns eating the cake into a fun party game–you don’t know who will get the lucky item.  And, getting the fève means the privilege of wearing a makeshift crown for the rest of the day—if you feel like it. That is, unless you’re lucky enough to be invited for cake over at the President’s palace: The presidential galette comes without a fève because designating a king is (of course) against the values of the Republic. That is, unless you follow the coronation immediately with decapitation.

For those having a more informal get-together, purchasing a cake at the bakery is the chance to add a couple of new charms to your collection and maybe be king for a day. For the past few centuries, porcelain has been the top choice for quality fèves, and France has its fair share of die-hard collectors. Bakeries use it as a selling point, advertising ceramists and new designs. Those who bite down on the trinket—hopefully without breaking a tooth—get to take it home and add it to their decidedly un-Marie Kondo pile of cute-yet-unnecessary things.

Admittedly, there are some home bakers who excel in the art of the galette and have spent the last year combing vides greniers for the perfect little trinkets. But the majority, however, leave it to bakeries as making your own puff pastry is very time-consuming and it’s fun to see each year what you’ll get for a trinket.

Apart from an assortment of charms, bakeries have also started offering creative riffs on the traditional galette. Cakes with fruit added to the frangipane, or filled with chocolate, have become mainstream, giving options to those who aren’t too partial to almond cream (yes, those sort do actually exist). That way, everyone can partake in sharing cake to forget all about those New Year’s resolutions for just a bit longer. And what better way to start a busy year than with more family, friends and sugar? We’ll side with the French on this one.