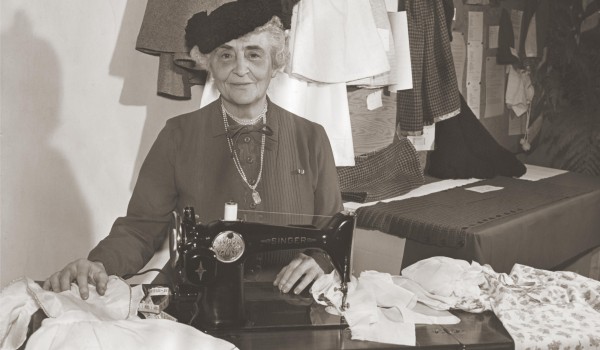 “A woman with passion and huge ambition.”

Alan Govenar never knew Anne Morgan, but he wants to make her known. The writer, filmmaker, and founder of Documentary Arts has just released a book, Anne Morgan: Photography, Philanthropy & Advocacy about this extraordinary New Yorker known only to history buffs—until now.

Throughout the book, which is written in both French and English, the author shines a light on Morgan’s essential role in the reconstruction of a France left in tatters after World War I. She co-fonded the American Committee for Devastated France, better known as C.A.R.D. (Comité Américain pour les Régions Dévastatées de France), an organization of woman American francophiles who mobilized to help a populace that had been ravaged by four years of war. C.A.R.D. volunteers taught and ministered, distributed food and cared for the sick and wounded.

It was an unimaginable destiny for someone like Anne Morgan, who was born into the sort of wealthy family that makes other wealthy families seem poor in comparison: namely that of John Pierpont Morgan, who was as dominant a figure in his family as he was in the financial world, where people knew him as JP Morgan.

“She lived in the shadow of her father. She served as companion to JP’s mistress, who was Anne’s age.”

The strong, young woman had already set the tone for her later life: as a child, she had sat at a dinner organized by her parents and declared that she wanted to work and not become a “rich idiot,” causing some discomfort among the guests. At the dawn of the twentieth century, she joined the growing number of women involved in serious causes, like women’s suffrage and temperance. She was active in various movements to improve the conditions of working women, participating in the creation of a holiday savings fund to allow workers to take vacations. This early feminist even founded the first women’s club in New York—the Colony Club, which still exists today.

But it was France that would be the biggest fight of her life. Living in a villa near Versailles with two American friends, Morgan was in the country when war was declared between Germany and France. “She found herself in France without access to her wealth. She heard people talking about the devastation at the Battle of Marne. When she returned to the United States, she dedicated herself to France. She loved the country, its culture,” says Govenar.

During and after the war, Morgan and others used their address books and fortunes to organize fundraisers, facilitating the purchase of equipment and ambulances for the front. In March of 1918, she launched C.A.R.D., whose headquarters were located in the Castle of Blérancourt in Picardy, which is now home to the Franco-American Museum. The group was indefatigable, recruiting nurses and physical education teachers, planting trees, opening free publica libraries. All her efforts led Morgan to be decorated with the Legion of Honor by Marshal Philippe Pétain, the “Lion of Verdun,” in 1924—she was the first American woman to ever receive the honor.

Anne again returned to France after World War II to help rebuild the country, but died shortly thereafter in 1952 in Mount Kisco, New York, leaving behind a body of work that few knew at the time. “She was an extraordinary woman. She was part of that generation of women activists, but her dedication is not well known,” says Governar. The book he co-wrote with UCLA professor Mary Niles Maack is abundantly illustrated with photos from the archives of the Morgan Library, the Corbis Agency, and other sources. “What is most striking about her,” he says, “is her perseverance in helping people around her, in France and in the United States, and in improving the world in which she lived.”

This article first appeared on the French edition of French Morning and has been translated and edited.