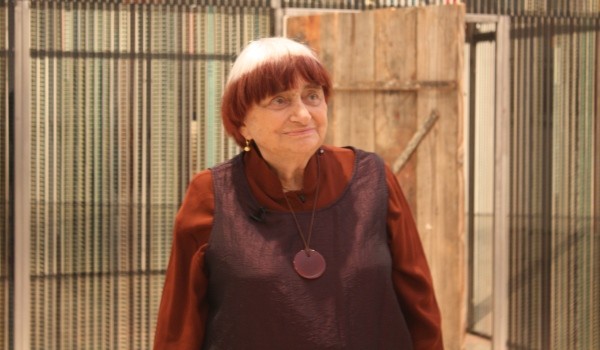 She is the most “Californian” of French filmmakers, and this month her works are being featured at the Los Angeles County Museum of Art (LACMA).   In the first museum exhibit of her work, Agnès Varda in Californialand will open to the public on November 3rd, preceded on the same day by a conference at the Getty.  The City of Angels is paying a special tribute to the “grandmother of the French New Wave” not only because Varda, now 85 years young, is an iconic filmmaker, but also because she considers Los Angeles a bit like her second home.

“When I came in 1967 with Jacques Demy (her late husband, who had come to make a film with Columbia), we were very excited,” she said at a press conference during the presentation of her exhibit at LACMA.  “We were very impressed by the spirit of freedom that was ever-present in Los Angeles, the culture, political protests against the Vietnam war… And sexuality was like an open book.  Artists were all a little crazy, and everything seemed to be freewheeling.  It was very inspiring.”

The Hippie Years in Hollywood

The movement inspired her first Hollywood-Hippie film, Lions Love, which was released in 1970.  “Today, Hollywood has changed quite a bit.  In those days, even the most well-established filmmakers in the industry wore those big love and peace pendants.  Nowadays, they clearly no longer pretend to be hippies!” laughs Varda.  She has certainly maintained a bit of a nonconformist spirit, as demonstrated by her two-toned white and brown, bowl-cut hairstyle and a matching loose tunic that she wears with small heeled sandals.

Agnès Varda is also interested in Los   Angeles’s social and political issues, which she has captured in her videos and photographs.  A selection of them is displayed in the exhibit at LACMA.  “I was one of the first to capture the Black Panther movement on film,” she explains.  But she would never have imagined, at the time, that the 30-minute documentary she filmed in 1968 on this topic would later become one of the most important accounts of the black community in America.  After having returned to France in 1970 Varda went back to Los Angeles for a second time, from 1979-1981, to film a documentary on mural painting in the City of Angles entitled Mur Murs, as well as a fiction movie based on her life in Venice, called Documenteur.  A selection of these photographs from her years in California is also on display in the exhibit.

A cabana offers audiences another way to watch films

In the middle of the gallery visitors will be treated to one of her famous shacks, or cabanas, which Varda created by using the print that she unspooled from the reel of the film Lions Love.  “I like the idea of cabanas.  Children need them to create their own nest.  When we grow up we still need them, but we can invite others inside to have a seat.  It feels nice inside, a place where we can reflect and repose.  It offers another way for audiences to watch films.  It’s a lovely way to express my love for film.”

At 85, Agnès Varda admits that she hasn’t changed the way she works. “I can only reflect on the work by immersing myself in a steaming bath, or in bed.  When ideas come to me, I always forget to write them down.  I’m not very organized, but that’s ok.  What’s important is to always think while you’re daydreaming.”

Art on Screen: A Conversation with Agnès Varda, November 3, 2013