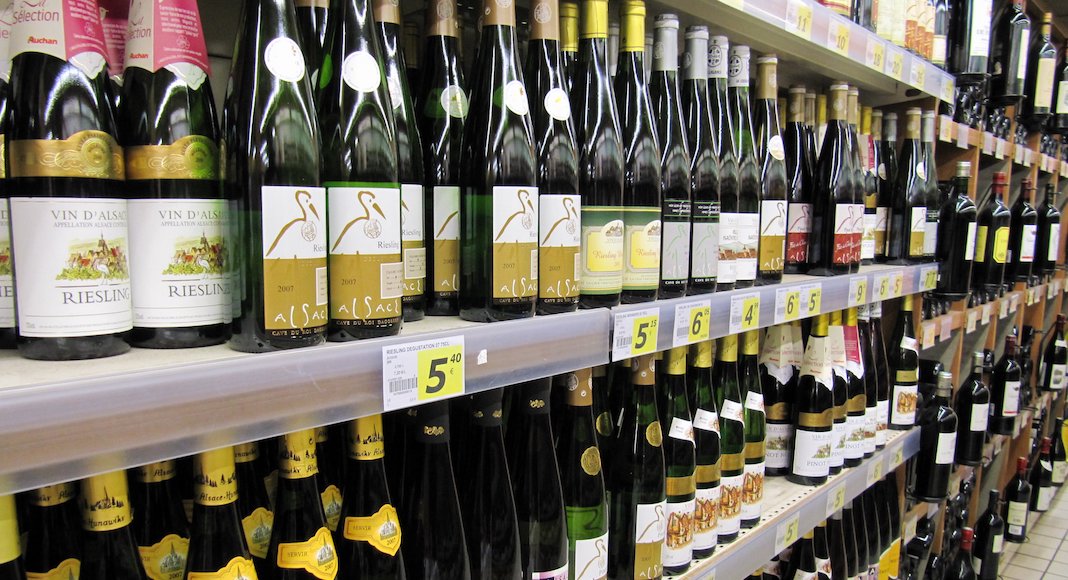 Why is wine so cheap in France?

Anyone who’s been in France knows that it’s easy to find a decent bottle of wine to share among friends (vin de table) for around 5€ on a shelf in a supérette, and even in a restaurant. A study by FranceAgrimer found that the average point of sale price of wine in France in 2014 was 4€15 per liter. France is a wine-lover’s paradise.

The only thing you’ll find for $5 in a US liquor store is a nip of Patrón. You might find a bottle of Yellowtail for $8… but a pint of Blue Moon beer is also $8 and that’s objectively better. In the US, the average price of a decent bottle (or at least one that you would trust to taste good) hovers between $10-$15. You’d think being the fourth largest wine producer in the world would provide us some good local wines, but even for a cheap bottle from Napa Valley, you’ll need to shell out at least $15.

So what does France do to make wine so cheap?

The curse of the “three-tier system”

Forget about what France does to keep prices low, it’s what they don’t do that’s important. According to Magdalena Rahn, manager of wines and spirits for North America at Business France (previously Ubifrance), high prices are primarily because of the rules of sale and distribution in the US. This system is aptly called the “three-tier system” because it has three mandatory steps. “The maker can’t sell directly to the consumer,” says Rahn. “He must go through an importer or a wholesale distributor, who then resells to a retailer, who finally sells the product to the consumer.” At each step, federal taxes and local taxes are added, and each intermediary takes a cut, which varies between 25-50%.

To illustrate this, Eric Dubourg, co-founder and owner of Wineberry, a wine import company based in New York, explains the path of a bottle of Sancerre to the US. In France, the bottle is bought from the vineyard for 6€50. “Generally you multiply the cost by 1.2 to obtain the cost in dollars, and you add a $1.20 for the cost of import and transport. The bottle is already $9 from that,” explains Dubourg. “Add the cut for the importer (25% of the price of sale), then that of the distributor (another 25%). The bottle now sells for $16 at the retailer, who himself wants to recoup a margin of 50%. At the store, the bottle will cost the consumer $24.”

Life without the middlemen

France keeps its wine prices low by doing mostly the opposite of the US. They have low alcohol taxes, more direct distribution, and extensive support for their own vast market (9 out of every 10 bottles of wine consumed in France are French).

With the costs from importing and distributing are effectively cut out, three options exist for getting delicious vin in France: direct from the vineyard, at a maison des vins (like a wine store, but better), or from a retailer. Vineyards offer a possible chance to tour the vineyard or try a few wines. It’s the most personal buying experience. Maison des vins are like fancy wine stores, offering perks like wholesale and discount wine prices, package discounts, and information about everything wine. The Maison des Vins Côtes de Provence, for example, sells 800 different wines, offers 16 wines for daily tastings, holds tasting classes, and sells regional food products. Maisons account for 7% of wine purchasing, while direct from vineyard sales account for 5%. The other 88% of purchases happen in retailers supermarkets, discount stores, supérettes, wine stores, etc.

The cost of a stigma

Unfortunately, we can’t just copy France’s distribution model to decrease costs because of an American stigma around cheap wine. “In the United States, you seldom find superstar vintners peddling $20 chardonnays and merlots; it would be considered beneath them,” explains Mike Steinberger in a Slate article. Americans treat wine as a luxury item, so we consider “knock-off” (re: cheap) wine bad. Besides that, we don’t drink enough of it to make slashing prices worth it. Americans sip a meager 9.93 liters per capita per year (which is 1.3 glasses per week). “[It’s] not a daily beverage, so Americans are used to paying more for it,” says Rahn.

Wine is not a luxury item in France, it is a beverage. They produce it in jaw-dropping numbers and consume it nearly daily. According to Wine Institute, France drinks about 43.1 liters of wine per capita per year, (that’s 5.6 glasses per week). “Some of France’s most esteemed producers—Aubert de Villaine, Christian Moueix, Dominique Lafon—proudly offer relatively inexpensive wines alongside their loftier bottlings,” says Steinberger. High rate of consumption makes low prices more desirable for the consumer, and totally acceptable to make for the vineyard.

So long as France keeps their minimalist distribution system, low alcohol taxes, and fondness for wine, they’ll cheers a sweet 5€ sauvignon blanc to low prices. The US, meanwhile, will be drowning their sorrows in a $24 bottle of rosé.