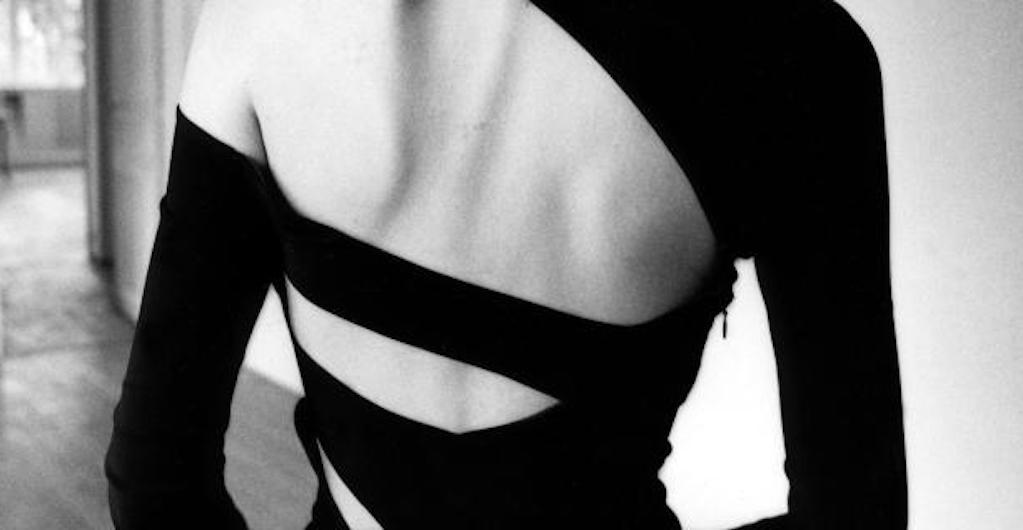 The neck, the curves and hollows of the shoulders to the stomach, the spine, the top of the butt… what an extraordinary and poetic swoop! We humans neglect our backs. Though we see everyone else’s, we simply think that ours is behind and don’t consider it.

Wrong. There is a part of us that everyone would do better to consider when trying on clothes — the proof is in the models. If everyone could see themselves from behind, we’d notice a lot more: the obvious underwear line, one shoulder hiked up higher than the other, the heels that knock us off balance. Only pay attention to the front, we think incorrectly. But it’s the back says much more about us, in the gait, the posture….

Only artists, painters, choreographers, and fashion designers have grasped the evocative power of the back. This is the theme of this masterful exhibition from the Palais Galliera orchestrated by Alexandre Samson, head of the haute couture department (from 1947 to the present day) and of contemporary creation, who has chosen to present in small chapters — the shoulder blades, the bare back, the small of the back, the brand, the bottom — in a very brilliant scenography (bravo to Jean-Julien Simonot).
These gems are exhibited “behind” the sculpture Bourdelle (i.e. in the Musée Bourdelle) because the museum of fashion, the Palais Galliera, is under construction. The resulting contrast is impressive.

The revolutionary Rei Kawakubo’s “body meets dress” sculpture dresses of 1997 respond to the powerful Centaur that stands in Bourdelle’s workshop. The cuts of Martine Sitbon’s “little black dress” are imposing, with its black lines between the shoulder blades and the waist, in the room of the large statues. In the museum’s new wing, designed by the architect Christian de Portzamparc, there are bare backs covered in lace by Saint Laurent, contained pleats by by Rick Owen, the delicate waves of Alaïa, the hook and eye closure dear to Jean-Paul Gaultier, the unstructured volumes of Yohji Yaamoto, and then… football jerseys and crinolines and gowns with trains…

The exhibition also teaches us how a dress train delimits a private space, which no one can cross. It is at the right time, in the middle of the walk through the exhibit, that we find the choreographer Trisha Brown, a great American of the post-modern era who reinvented the codes of dance. Here, in this solo “If You Couldn’t See Me” (in a vaporous costume by Rauschenberg), she only shows her back to the audience.

The “loads,” dear to Margiela — the backpack, the double coat, which hinder or free the garment, and the contrast between the front strapped up to the chin and the bare skin from the ground to the butt — become emblematic issues revealing of each era. Like the famous “Darc Back” by Guy Laroche that the irresistible Mireille Darc wore in the film “Un grand blondie avec une chaussure noire” to tempt the shy Pierre Richard. The great style, the great voice, the chic and the beauty are united in a few meters of a taffeta — maybe silk or even something like a mist? — a fabulous and unreal thing, by Balenciaga in 1961. Fashion, seen from behind: a wonder.