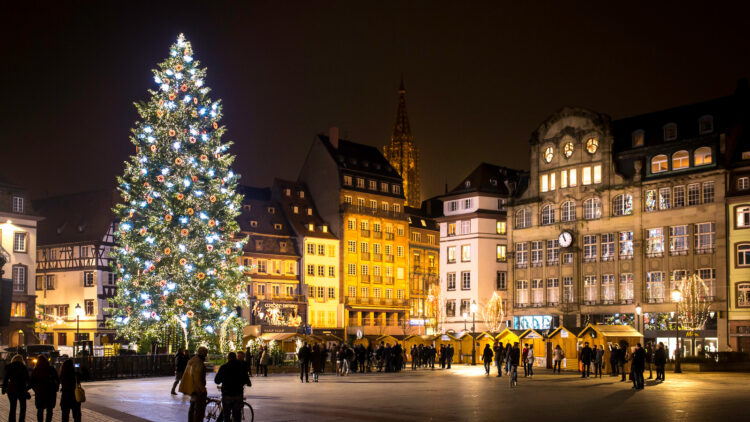 If you are lucky enough to be in France during the holidays, there is nothing that can compare to the feeling of walking the holiday market streets, with a cup of vin chaud in your hand. As the air fills with the sweet scents of gingerbread and nuts, spices and pine trees, the string lights enhance the magic of the season, even as Omicron barrels down and you are once again masked and trying not to feel too bleak. This is a chance to join in on the festivity while staying outside and enjoying the holiday decorations and stocking up on any last-minute gifts you may need.

While best known as an integral part of German holiday celebrations, holiday markets, especially in Eastern France, are quite a spectacle. Most French cities have their own version of a small holiday market, but these are the cities best known for their festive atmosphere, Sanitary Pass in hand. All visitors are required to show proof of vaccination that can be confirmed in many pharmacies and obtained as a sanitary pass for a €36.

Visitors may take the French trains there or fly into the cities of Frankfurt, Germany or Basel, Switzerland to explore the Eastern cities. 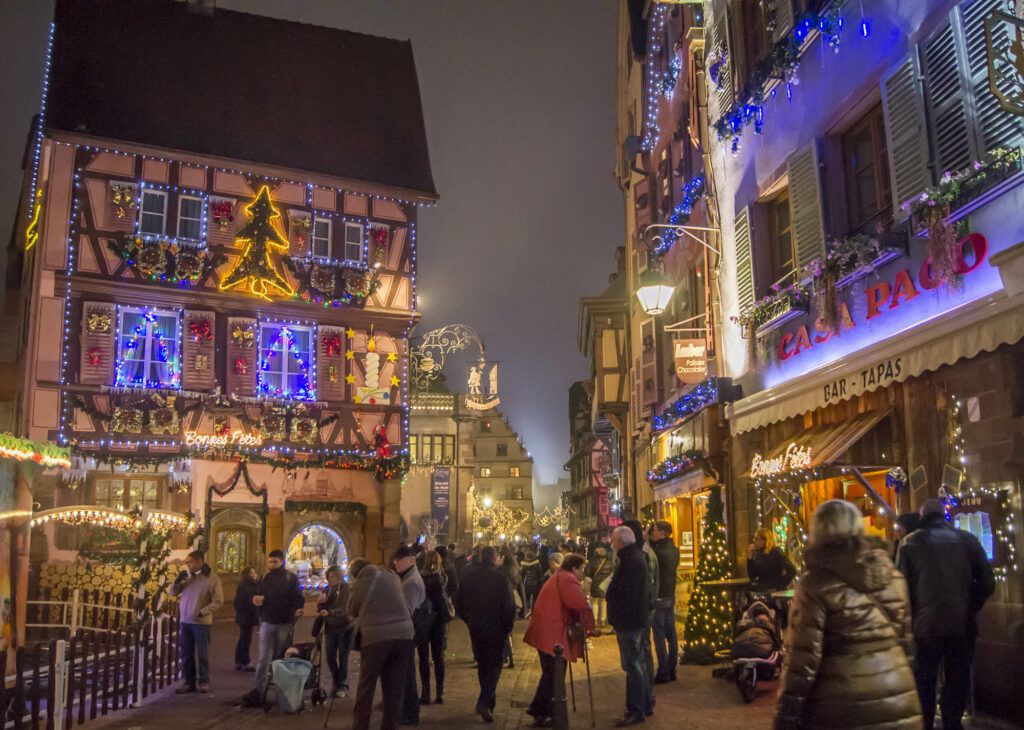 Located in the Eastern most part of France, wedged between Switzerland, Germany and Luxembourg, Colmar is one of the true capitals of Christmas celebration. Transport yourself into an old-time fairytale in this ancient, primarily pedestrian, city. The “Old Town,” is  composed of German Renaissance style architecture and the town center turns into “Christmas in Colmar,” –a week-long celebration illuminated with festive lighting to enhance the city’s heritage. Each window and door in town is adorned with holiday wreaths and ornaments as well as nativity installations. Walk the city streets and don’t forget to indulge in Alsatian wine while there. 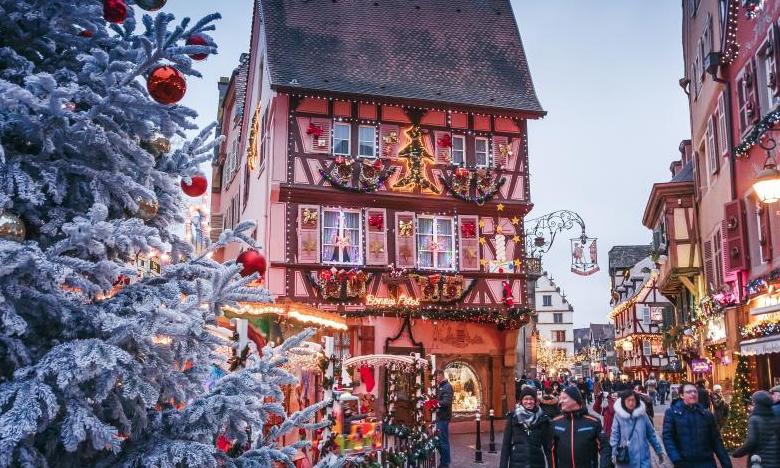 And while you’re in the east, Strasbourg is just slightly North of Colmar. Legend has it that the first ever Christmas market was first set in the city of Strasbourg. It was 1570, then called the “Christkindelsmärik” (market of the Infant Jesus). Today it is known as the longest running Christmas market in Europe. This year, the city has named its market called “Let’s Light the Stars” and the festival will feature many star-inspired decorations. Its streets will be filled with over 300 wooden chalets filled with food, gifts and drinks as well as winter games and entertainment. The crown jewel of the fair is a beauty of a Christmas tree, one of France’s tallest and most beautiful to date. Many think it is Europe’s best Christmas market. 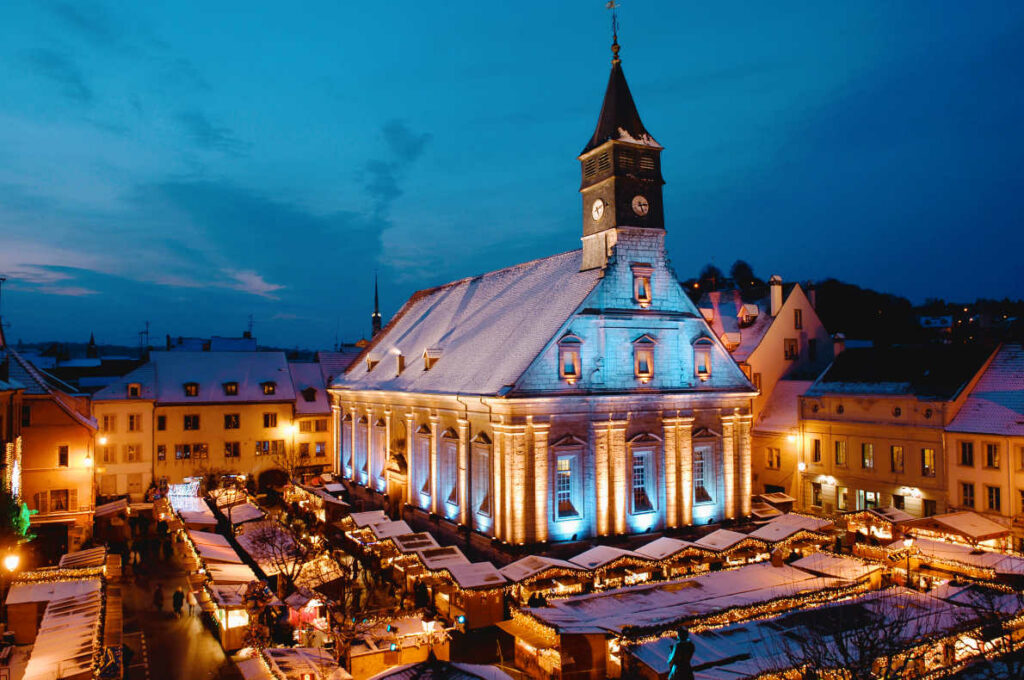 A bit South of Colmar is Montbéliard, a largely Swiss city located in France. Just 13 km away from Switzerland, this little town is a lovely mix between the two cultures and traditions. Looking for a traditional market? The 160 lovely stalls full of authentic and high quality items in Montbéliard deliver just that, embracing the true atmosphere of Christmas. Walk the snowy streets or even engage in dance and singing of choral songs. 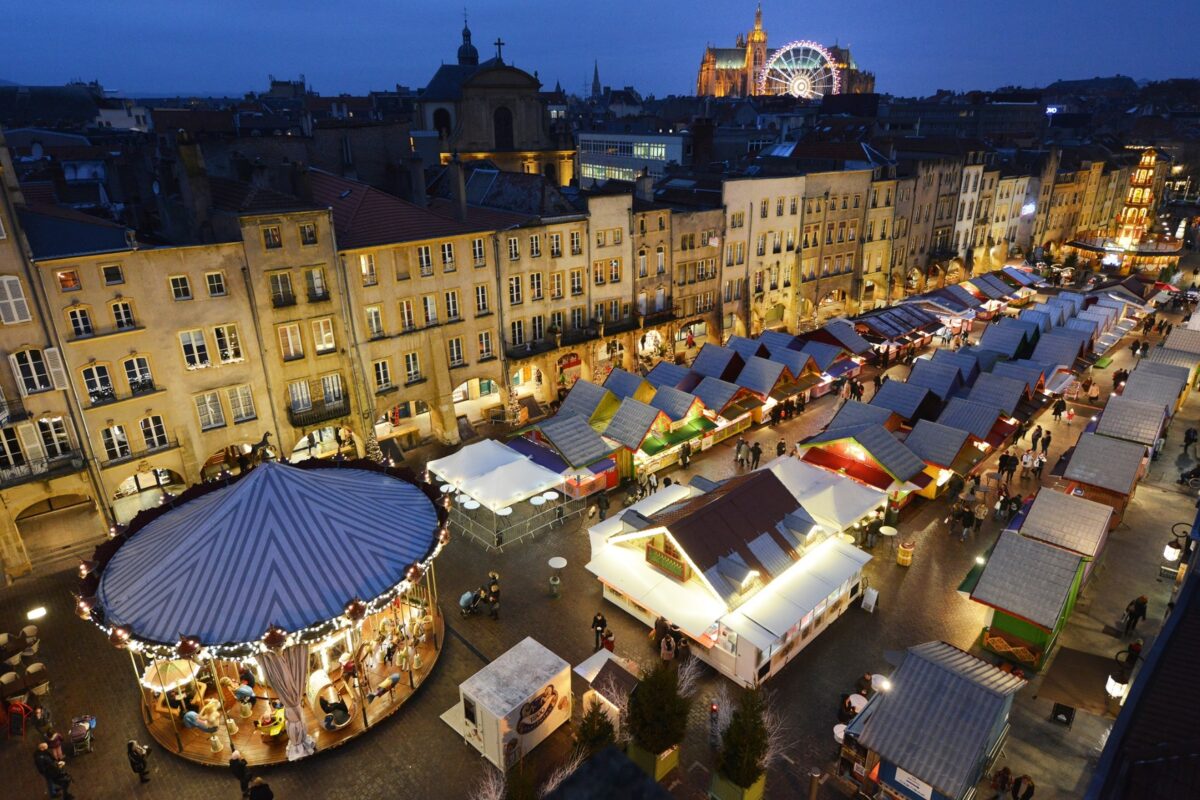 One of the longest-standing markets this winter will be held in Metz just East of the Lorraine forrest. There you can find the finest hand-made Christmas presents around or taste the best gingerbread in town. There’s an iceskating rink, a colorful merry-go-round, and a magical “Sentiers des Lanternes” light corner.  The market also features entertainment for adults with gourmet food stands to indulge in the local specialties.

For those staying in central France, Reims is the midpoint between Metz and Paris (1h30 away.) Reims is said to be where the first French Christmas celebrations took place back in 496BC. It was there that King Clovis and his 3000 warriors were baptized on Christmas Day. What else would you expect from a city made famous for its champagne? No wonder that most of France’s Kings were crowned at the Cathedral of Notre-Dame de Reims. The annual holiday market is set at the Place d’Erlon, facing the medieval cathedral, where 145 chalets shine with twinkling lights and offer seasonal gifts. Street entertainers crowd the streets while some take a ride on the Ferris Wheel, champagne in hand.

And while you’re at it, check out the nearby town of Epernay’s “Habits de Lumière” light show. 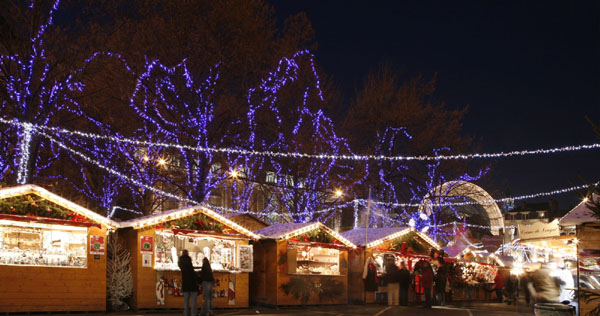 And all the way North is the young and bustling city of Lille, which shines with holiday spirit during the winter months. The festive atmosphere comes alive on its streets, decked out in lights and decorations as well as 80 chalets. While most French markets support French production, Lille’s marché includes artisan products from Russia, Poland, and Québec, and the Americas.  The market features a glorious ferris wheel, ice skating, as well as many tasting chalets and holiday activities. 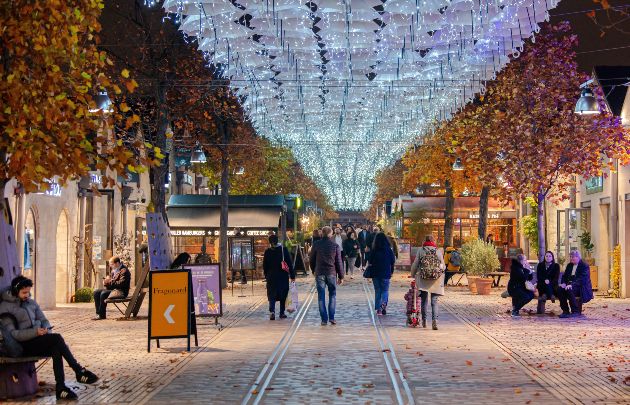 While there are plenty of petit Christmas Markets in Paris this year, its primary one has gone virtual, boasts the tourism board. Frenchly suggests that you hop on the train and/or rent a car and head out East for some holiday cheer.

For those still looking for a true holiday spirit in Paris, head over to the Notre-Dame or Hôtel de Ville markets. The Saint-Germain-des-Prés marché also always brings in a local crowd, in a quaint and lovely atmosphere. For more markets please check out ParisInfo.com as just about every neighborhood will put on its own show this holiday season.