By definition, bourbon is an American made whiskey, distilled from corn and aged in oak barrels, whose name is derived from the French Bourbon dynasty. (Early French distillers in pre-revolutionary American colonies may have been, in fact, the first to age whiskey in oak for French immigrants in New Orleans who missed their brandy.) The age-old connection between bourbon and France continues into the twenty-first century thanks, in part, to the personal journey, and family history, of the Kentucky expat now living in France named, Ashley Donahey.

Ever since she was a student in Aix-en-Provence, Donahey says she’s “schemed” to get back. She now lives in Aix, where she runs her company, Two Worlds Whiskey, a bourbon born in Kentucky and blended especially for the French palate.  It is the culmination of two of her greatest passions – bourbon whiskey, and France.  She traces her love of all things French to when she started taking French in the sixth grade. She was encouraged by her grandfather who regaled the family with stories of his time in France, where he spent many months after landing there on D-Day. Donahey discovered a cascading number of family connections to both France and bourbon. “My fifth great-grandfather, who fought (on the side of Washington and Lafayette) was in the whiskey business” she said, “with a tavern and five stills on his farm, which he bought from (Abe’s uncle) Mordecai Lincoln.”

On her way to getting her Masters in French Literature (University of Michigan), followed by a Masters in European Studies (Georgetown School of Foreign Service), Ashley managed to spend three semesters living in France. After her studies, she landed a plum job with the State Department, based in Washington, D.C. (in a building designed by French architect, Pierre Charles l’Enfant).  But her passion for both France and bourbon kept growing.

In 2017, she handed in her resignation and moved to Paris. Once there, she became a sales rep for the famous Maison du Whisky and she traveled the country meeting bartenders and retailers, living the dream. But it was about to get even better: Tasting whiskeys with French professionals and enthusiasts, she figured out why they weren’t warming up to Kentucky bourbons. The “knock-you-over” big flavor profiles that American drinkers prefer just didn’t suit French palates. “I was discovering that when the French were telling me what they were looking for in a whiskey I was hearing words like, “refined,” “elegant,” and “delicate. And the French appreciated more floral notes, creamy mouth-feel, and a long and well-structured finish,” she observed.

Ashley decided to get an MBA at the prestigious French INSEEC Business School, where she wrote her culminating business plan on how to improve the image of bourbon in France.  Her “aha” moment came in January 2019, when she decided to put the plan into action for her own business. With her two Kentucky-based partners, she worked tirelessly to create an American custom blend suited to the French palate. After a year and a half, including a the interruption of the pandemic, the first shipment of Two Worlds Whiskey arrived in France. It was met with an overwhelmingly positive response. There is a poetic logic, she now says, to her transition from diplomacy to distilling. “Bourbon, like diplomacy, brings people together,” Donahey remarks. 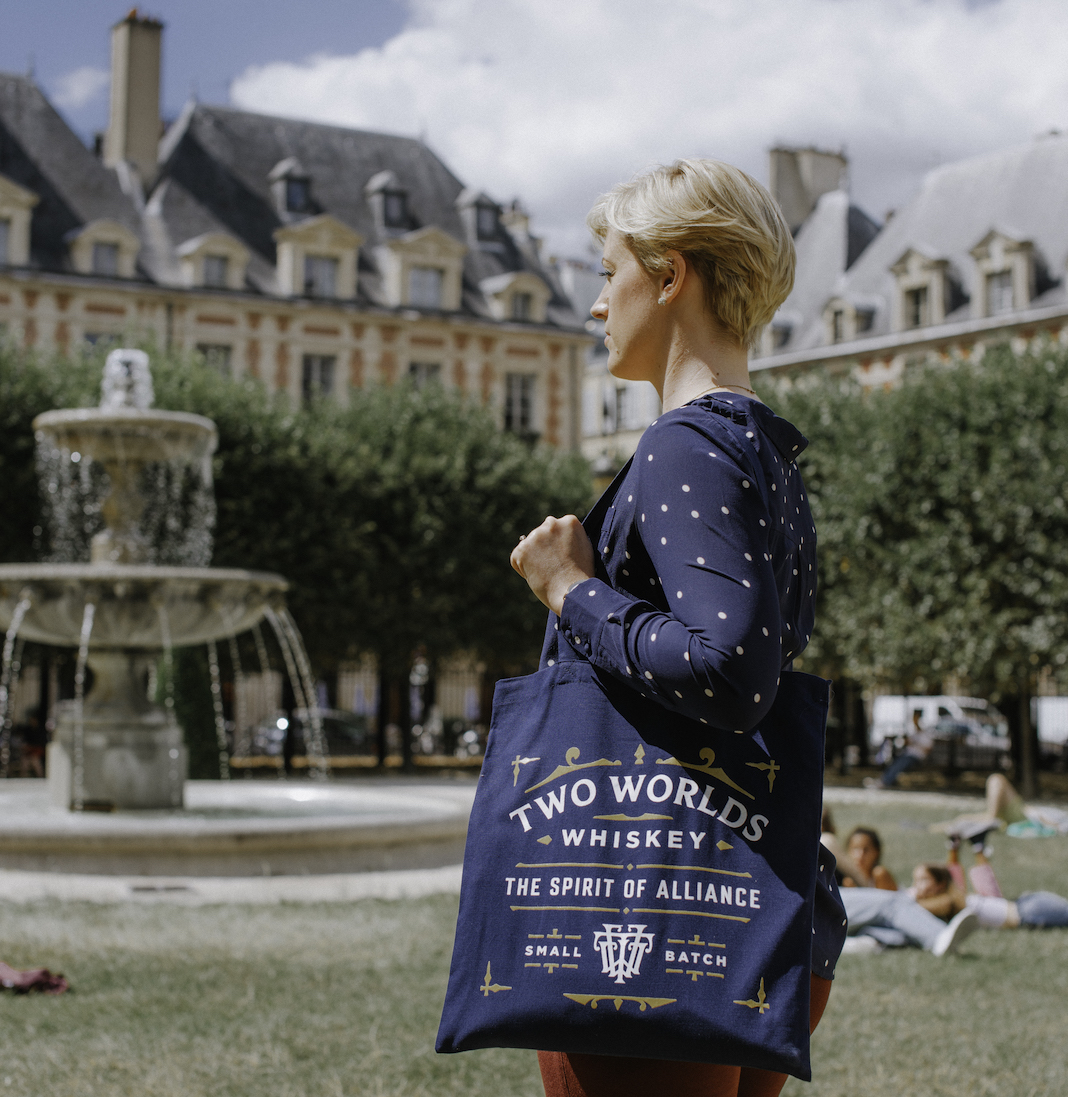 You can still hear the heart-felt awe in her voice when Donahey speaks about the Marquis de Lafayette, the French aristocrat who risked everything to come to America to fight alongside Washington in the American Revolution, and to be part of the great democratic experiment. It is in honor of Lafayette, known as the “hero of two worlds,” that Donahey’s brand is named. The bourbon’s very first edition, La Victoire, bore the name of Lafayette’s famous ship.

While the first edition was made and finished in Kentucky, the second edition is being made with bourbon made in the U.S. but finished in Aix-en-Provence, France. For the third edition, the American distillate will be aged in French oak, in France. Since whiskey has to be made in the U.S. to be called “bourbon,” Two Worlds has now introduced a whole category, a distinct  French-American “bourbon” based product. The best of both worlds, in a glass.