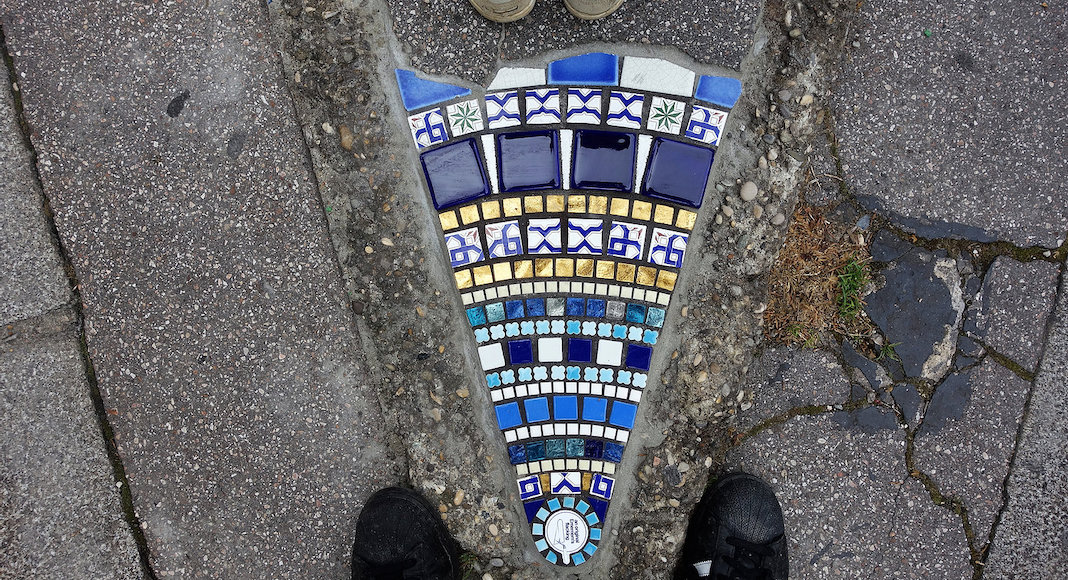 This French Street Artist is Turning Cracked Pavement into Art

When we talk about “street art,” it’s often a catchall for art that happens outside, generally on walls and buildings and subway cars. But there’s one street artist trending right now who’s taking the phrase literally. Known by the discreet moniker Ememem, this Lyonnais artist has been taking potholes and sidewalk cracks and filling them in with mosaics, in a process he has dubbed “flacking.” The term is a cheeky reference to the French word flaque, for puddle, as if these mosaics are simply filling potholes as organically as rainwater might.

But how did this all come about? “It’s all the fault of an old traboule with a hole in it that led to my first workshop,” Ememem says, referring to a specific kind of secret passageway native to Lyon. “It was the summer of 2012, after 4 months spent in Colombia, I was back in Lyon and I decided to fill all the cracks with scraps of ceramic and colored glass.”

But it wasn’t until 2016 that things really took off. “Years later, in front of another workshop, this time it was a big ni-de-poule (pothole) that was waiting for me every morning. One day I took care of it, but in a different way. I filled it with a pastel checkerboard; the first flacking was born. I watched it every night for a long time and then I realized that I was going to do this for the rest of my life. I was bewitched.”

The materials for mosaics, he explains, are easy to find, making them an ideal source material. “It’s a finite yet infinite material for creating textures, colors, patterns. It’s pure flawless color.” And the act of flacking itself seems to come from a natural instinct to beautify urban landscapes, rather than some grand political statement. “The street completes my work, it provides the ultimate contrast and prevents me from overthinking. There is a hole, I fill it.”

Though he started in his hometown of Lyon, he has left his mark in cities all over Europe, including Barcelona, Turin, Paris, and Aberdeen. His work is currently available for viewing in Paris as part of a collaboration with Société du Grand Paris, which will fund him to “flack” the new Grand Paris Express metro construction site. This will be open to the public through the end of August. Other works will be on view in Paris at the Galerie Italienne from June 9 through July 17, and in Lyon at Spraying Board from June 3 through July 10. But those unable to travel can also follow him on Instagram for the latest guerrilla mosaics.

Always cagey, Ememem declined to offer specifics on his next move. “I never reveal too much, you know how I prefer discretion. But I should be out of Europe for the 1st time at the end of the year and that’s very exciting.” His work is always playful and optimistic, leaving a little bit of color and at least as much hope in its wake. When asked to name a favorite work of his, he answered: “It is always the next one.”