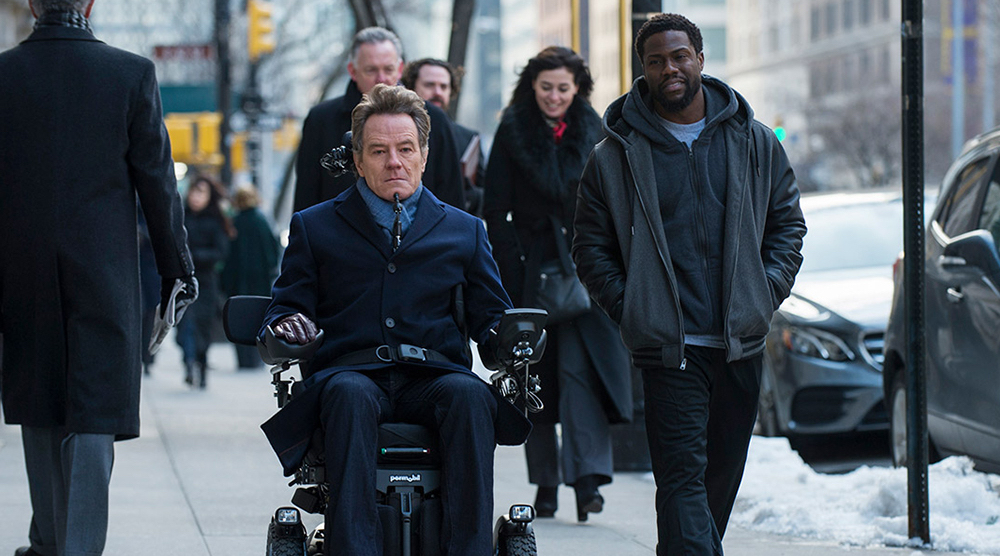 In 2011, directors Olivier Nakache and Éric Toledano rocked the world with the film Les Intouchables, which quickly became the second biggest box office hit in French history, and was voted the cultural event of the year in a poll by fnac. The movie, based on a true story and starring François Cluzet and Omar Sy, centers around the relationship between a wealthy quadriplegic and the ex-con he hires to be his caretaker.

Cut to 2019: The American remake. Titled The Upside, this Intouchables 2.0 stars Bryan Cranston, Kevin Hart, and Nicole Kidman, a combination of talents so extreme that it should be fresh meat for the hype monster. Though set in present-day New York City, The Upside feels, at times, like a shot-by-shot recreation of the original, down to the music and camera angles used in the iconic opening scene. It’s a kind of black mirror version, with the Louis XVI decor of Philippe’s Paris replaced by an obscenely high-tech version of Phillip’s Manhattan.

But the main bizarre difference between the films is the tone. While Les Intouchables is undoubtedly a comedy, The Upside carries a sense of melodrama that makes even its designation of “dramedy” seem euphemistic. The warm, ineffable charisma of Omar Sy’s Driss is stripped off and replaced by a dry Dell, played by Kevin Hart in his first serious dramatic role. It begs the question of whose idea it was to cast America’s funnyman in a great comedic role, and then cut all the jokes from the script. His motivation — the vague desire to rebuild a relationship with his kid — turns him into a paper cutout of a deadbeat dad, and his persistent motto of, “I’ve gotta pick up my son,” does little to add depth to Dell’s character. (Caution: spoilers ahead.)

Bryan Cranston’s Phillip is slightly better, though for much of the movie his acting choices are so true to the original that it might as well have been Cluzet reprising his role. But this version of the injured billionaire isn’t just depressed; he’s suicidal. His first scene has him berating Nicole Kidman’s Yvonne for ignoring his “Do Not Resuscitate” clause after saving him from respiratory failure. Everything interesting about him (and Dell) is given away within the first twenty minutes — Phillip’s dead wife, the accident that cause his injury, and the obvious fact that in this version, Phillip is destined to end up with the icy but devoted Yvonne. The fog of mystery that keeps viewers hooked throughout Les Intouchables is condensed into a thick smoke you’re expected to choke down in the first half hour.

The difference between the two films can be boiled down to their names. The French made a comedy called “The Untouchables,” which, yes, is about two men ostracized, in their own ways, from society. But the ironic title is allowed because it’s in on the joke: that these two men learn to find the humor and the joy in their own outsider status. “The Upside,” on the other hand, makes excuses for why, exactly, a disabled man and a criminal get to be happy. At the end, it gives Phillip a Hollywood romance, and Dell an enterprise. American ideas of success. Les Intouchables doesn’t give them anything. It doesn’t have to. Because their happiness doesn’t come from the end of drama. It comes from the comedy that is our everyday lives.