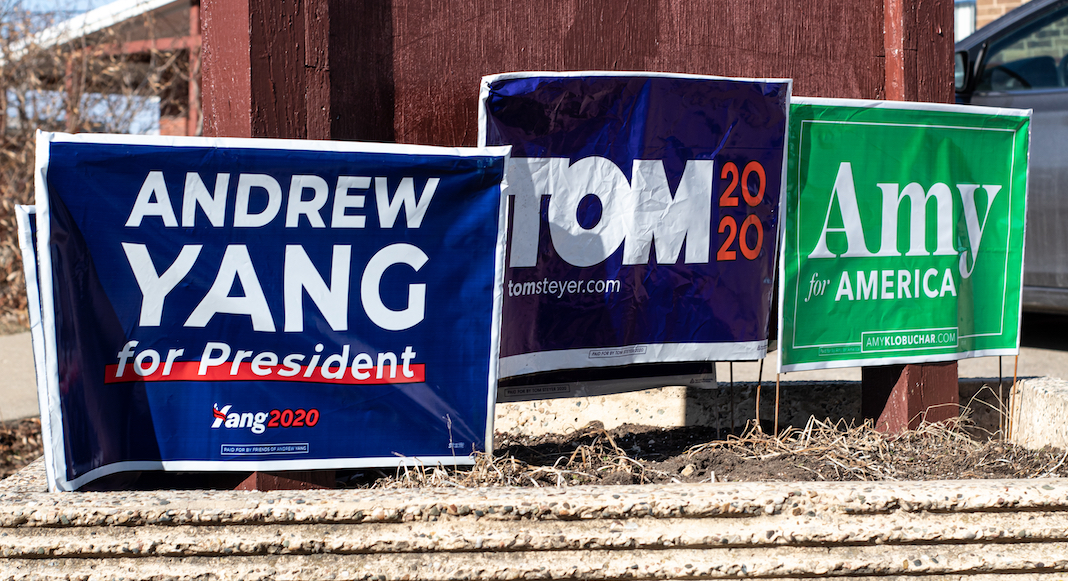 The French-Americans Voting in the Iowa Caucuses: “I Take It Very Seriously”

“There’s no pressure, it’s an honor to vote first,” said Linda Sabic, one of the Franco-Americans who will participate in the Democratic caucuses in Iowa on  Monday, February 3. It’s the first step in the nomination of the democratic presidential nominee who will face Donald Trump in the 2020 presidential election. Sabic, a real estate agent based in Des Moines since 2001, admitted she didn’t know who she would vote for. But she was sure of one thing: she won’t take her decision lightly. After all, the rest of the country is watching her. “There’s a sense of responsibility. I take it very seriously.”

Even though Iowa doesn’t send many delegates (49) to the July convention where the Democratic Party candidate will be officially nominated, the state plays an important role in the nomination process. A victory in Iowa, even a small or relative one, encourages a surplus of donations and credibility before the rest of the primaries and caucuses in the other American states, starting with New Hampshire on February 11. Note that Iowa Republicans will hold their caucus on the same day.

For months now, the inhabitants of Des Moines and other towns in the state have been bombarded with text messages, calls, advertisements, and letters sent by the various campaigns. Not to mention visits from volunteers going door-to-door. For the four Frenchmen of the city who gathered to talk about the caucuses for UFE Iowa (Union of French Nationals Abroad) in Des Moines on Friday, it’s all too much. “It’s like a broken record. We’re getting fed up with it,” said Corinne Zaragoza, a former medical researcher who has just published a fantasy book.

“It’s a saturation,” added Nicolas Percheron, a Franco-American who’s been living in Des Moines for 19 years. “It’s starting to go on too long. With the money that goes into TV and radio commercials, we’re surrounded by it. Plus, they’re negative ads. The candidates criticize each other and don’t talk about what they’d like to do to improve the state or the country.” A father of two, Percheron could understand the criticisms that are made during the caucuses, especially because of the public nature of the vote. In caucuses, voters physically divide themselves up in the polling place (a gym, a cafeteria, or even a house) according to their candidates, under the gaze of other voters. Even so, Percheron will make the trip. “For me, it’s a civic right and a duty. Those who can go and vote must go. Iowa gives a good idea of what may happen in a few months’ time during the general election. It sets the tone.”

Nathalie Girod, who belongs to Iowa’s largest constituency, the Independents, will not be going to caucus on February 3 because she can’t sort through the candidates who are running. “All I know is I don’t want Trump any more. I’ll go to the polls in November, for the presidential election,” said the French designer, who has lived in Des Moines for three years.

In any case, these French people are happy to see their adopted city in the spotlight, even if it’s not going to last. Des Moines, like everywhere else in flyover country, is experiencing a demographic boom thanks to low property prices, especially its western neighborhoods (Urbandale, Waukee, West Des Moines…). “This is no longer the city of twenty years ago. There are many Hispanic, African, and European communities now,” said Sabic. “There are a lot of opportunities here and a good quality of life. The people of Iowa are nice, honest… ‘Iowa Nice’ is not a legend,” added Percheron.

Even though UFE — with its pictures of Paris on the wall, its TV on France 24, and its chilled bottles of wine — is one of the only bridges they have left with France, these French people in Des Moines can count on the other inhabitants of the city to remind them where they come from. The name “Des Moines” is the result of the encounter between French explorers Jacques Marquette and Louis Joliet who travelled the Mississippi Valley and the local Moingona tribe in the 17th century. “We’re often asked how to pronounce Des Moines,” laughed Corinne Zaragoza. “And when you look at the flag of Iowa [a tricolor banner similar to the French one, with an eagle in the middle], you feel like you’re looking at the flag of France!”