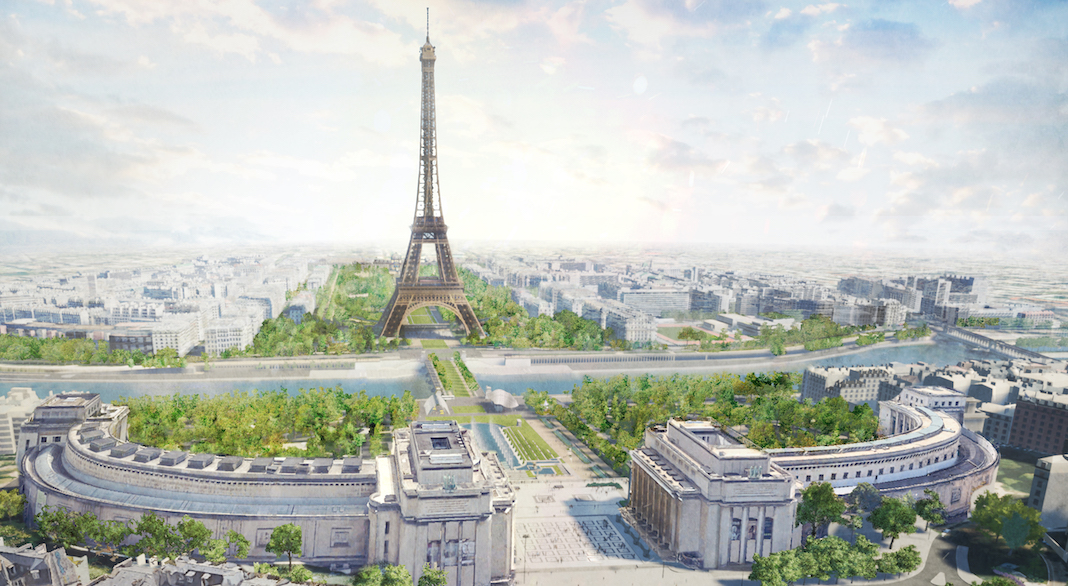 The Eiffel Tower Will Become One Large Park, from Ecole Militaire to Trocadero

“We are betting on a green city.” Paris Mayor Anne Hidalgo wants to give France’s capital a new, green face. As detailed by Le Parisien, the mayor of Paris presented, on Tuesday, May 21, a new project to turn the city green. And so, within a few years, a green center will have been added to the heart of Paris.

According to the daily newspaper, it’s a 72 million euro project that will create the largest garden in Paris. It will connect the Trocadero to the Eiffel Tower via the École Militaire and the Pont d’Iéna. The operating expenses will be entirely financed by the revenues of the Eiffel Tower operating company. The hope is also to make a large part of the area pedestrian-only.

“It’s an extraordinary journey! We are going to offer a new park to Parisians, who will be able to let go of their children’s hands and walk around hearing the birds singing,” described Hidalgo in remarks reported by Le Parisien. “Rethinking this site was obvious to all the teams and this is the right time. The Eiffel Tower is the symbol of Paris, but also of France. We had to think and reflect on what this place would be like in 5, 10 or 15 years’ time. Today, we are betting on a green city with this additional link created between the Parc Rives-de-Seine [of Rive Droit and Rive Gauche]. Nature will reclaim its space and combine with an exceptional heritage. Paris has to maintain its international leadership on environmental issues. In a very dense city, grands espaces de respiration (large breathing spaces) are also necessary. With this project, we are reinterpreting a unique place. We’re proving that we know how to adapt, question and reinvent ourselves.”

In detail, the Pont d’Iéna will be covered with trees by 2023 and lawns will be planted. Only emergency vehicles and public transport will be allowed to drive on it. On the side with Place du Trocadéro, Rive Droit, amphitheatre seating will be created up to provide 12,000 seats. As for Place de Varsovie, it will be entirely reserved for pedestrians, explains Le Parisien. “We want to relieve the Champ-de-Mars from as many gatherings as possible,” says the city. In addition, the pedestrian traffic between Quai Branly and the Eiffel Tower will be optimized.

Kathryn Gustafson, a 68-year-old American landscape architect, will be taking on the task of rethinking the 50 hectares in the center of the capital. To Le Parisien, she explains: “I’m horrified by the state of the premises, which is not adapted to the flow of walkers and visitors. We have to rethink everything.” Once the project is done, the city will have a nearly a one-mile (1.5km) green walkway.