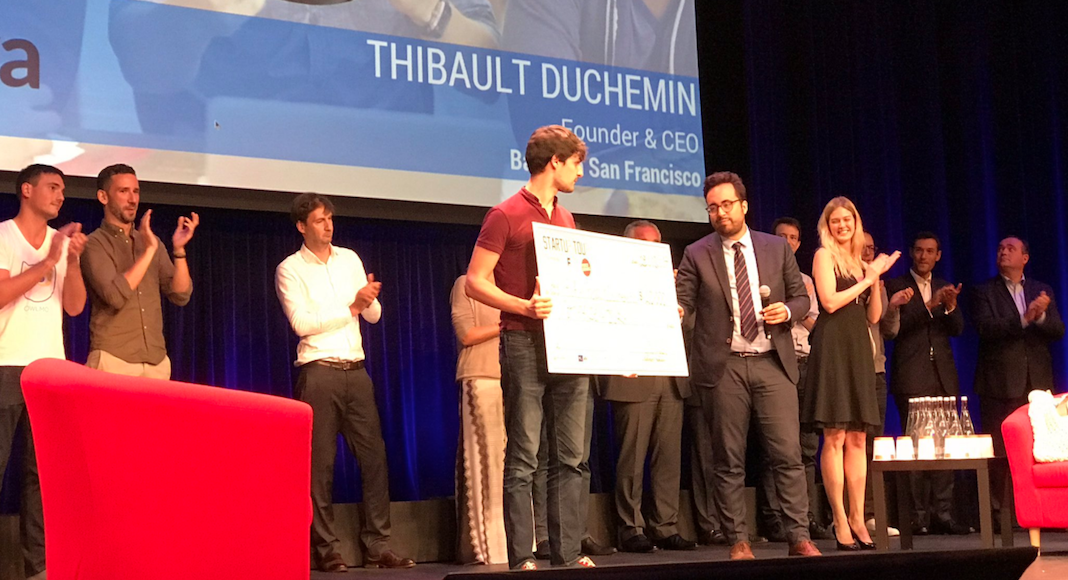 Besting its seven competitors, the scribing app Ava was awarded first prize at the final of Startup Tour, a competition for French startups in the US, co-presented by FrenchFounders and French Morning, in New York.

In the BNP-Paribas Axa auditorium, the CEO and Founder of Ava, Thibault Duchemin, presented his pitch to a packed house of 500 journalists, entrepreneurs, investors, and high-level executives, primarily from the Francophone community. The app uses artificial intelligence to connect the deaf and hearing worlds via smartphone, by listening to conversations through the microphone, and transcribing them in real time into text on the screen. “The fastest captioning system in the world today,” explained Duchemin. It was clear the audience was rapt and impressed, because the applause following his pitch was the loudest and the longest of the event.

Duchemin’s connection with the Ava product is personal. He was born the only hearing person in his family. He was a translator for them when he could be, though he quickly realized that being deaf removes accessibility to the hearing world’s conversations. “This prize is great, because at the end of the day, it’s really about raising awareness of the fact that accessibility is at stake,” said Duchemin in an interview with French Morning. His hope for accessibility rings true in his goals for Ava: “In 10 years — total accessibility, 24 hours a day, for 400 million deaf and hard of hearing people, and the people close to them.”

Ava’s first prize package is worth $100,000, and includes $20,000 cash, consultations, PR, advertising, Paris-New York airfare, and more. Two other prizes were awarded: Cybel Angel, a security website that scours the internet for leaked data, took home the Fan Prize of $2,500 for receiving the most social media votes, and Diabnext, an interfacing logbook for people with diabetes, won the prize from the French Grandes Écoles Alumni Association (AAGEF) for $5,000, presented by AAGEF President, Anne de Louvigny Stone. The five other finalists were Invivox, OWLMO, Dr. Banner, Washos, and Dubdub.

Representatives from the French government attended Startup Tour to demonstrate their support for international French tech. Mounir Mahjoubi, French Minister for Digital Affairs, gave the introductory remarks, and Roland Lescure, member of the French Parliament, participated in a panel about the transatlantic relationship between France and the US. Gérard Araud, Ambassador of France to the United States, and Anne-Claire Legendre, Consul General of France in New York, were also in attendance.

Besides discussion of France’s entrepreneurial ecosystem, the issue of gender diversity in business was raised. Of the nine jury members, one was female. Arriving on stage immediately after the jury, Minister Mahjoubi began his remarks by making “remarks about the ones who are not onstage today — women.” He commented that none of the startup finalists were women, and of the competition’s 30 initial competing startups, only two were headed by women. “Diversity of entrepreneurs,” said Mahjoubi, “will be the main objective of our work in the coming months.”

"If you want different companies, you need different people" : why diversity and women empowerment in tech are essential. #startuptour pic.twitter.com/dIKtAXNycb