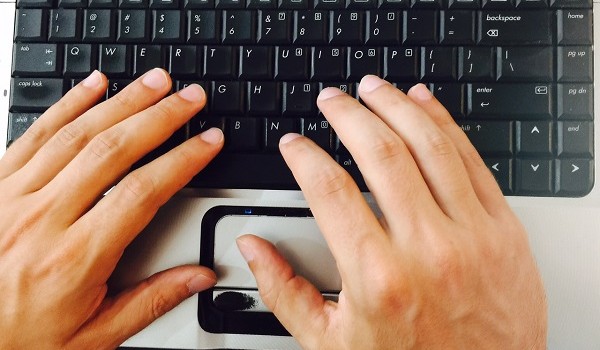 QWERTY vs. AZERTY: Why are French and US Keyboards Different?

Remember the first time you tried to send an email from France to your friends and family back home? Perhaps it was in an “internet café” where you paid by the minute and were confronted with the following stressful realization: Qll the keys qre in different plqces1 Zell; this is going to tqke q lot longer thqn I thought:

Why, users of the Latin alphabet, do we not use one universal keyboard for all of our typing needs? To answer this question we must go back to the invention of the keyboard, which first appeared not on the computer, but on the typewriter (not just a decoration for hipster bars!).

One of the inventors of the typewriter, a certain Christopher Latham Sholes, realized back in 1873 that many common spellings in English use letters that appear one after the other in the alphabet, such as b-a or d-e. This meant that ordering the keys alphabetically on the typewriter could often lead to the adorably analog technical difficulty of keys getting crossed.

Sholes then proposed a different arrangement that would spread frequently-used-together keys apart from each other. But there’s more: if you look at the top line of keys on an American keyboard, you’ll notice that it includes all the letters you need to spell the word “typewriter,” a convenience for salespeople trying to perform a winningly smooth typing demonstration for their customers.

The QWERTY keyboard was not conceived with ergonomics or typing speed in mind, but rather to solve a technical difficulty. Keyboards were quickly adopted in other countries with the same alphabet with minor adjustments. In Germany they have the QWERTZ keyboard, along with the majority of other Eastern European countries. But somehow, France ended up going even farther with their interpretation and came up with the AZERTY keyboard.

The French keyboard seems to have progressively taken hold during the first decade of the 20th century, says historian Delphine Gardey in an article on the subject. At the time, the majority of typewriters sold in France were imported, especially from the US, but that did not hinder the French desire for a keyboard adapted just for them. American typewriter-makers agreed to produce special machines for France.

Why did the French end up with the AZERTY layout? No one knows. One thing is for sure: it doesn’t make typing in French any easier. In fact, Québécois and Swiss francophones both use QWERTY keyboards that include special accent keys.

In France, efforts to improve upon AZERTY have failed. In 1907, Albert Navarre tried to introduce a layout that was supposed to make typing in French faster and easier, but it was a non-starter, Delphine Gardey says. Again in 1976, France tried to force a new norm on its population by adopting the QWERTY layout, but it was in vain. It wasn’t just France that resisted change: in the 1930s, Dvorak tried and failed to introduce a new system in the United States.

Resistance to changes to the keyboard is so famously staunch that economists often refer to it when studying a phenomenon called “path dependency.” It says that past decisions or past practices can override rational though to guide future decisions. In short, America has QWERTY and France has AZERTY because that’s the way it has always been.