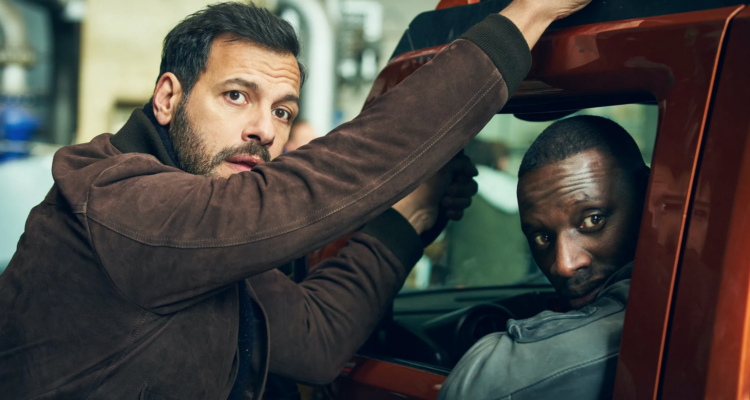 The Takedown—the third most popular movie on Netflix today—is not a good movie. Director Louis Leterrier reunites the two leads from 2012’s On the Other Side of the Tracks for another big, dumb buddy cop flick with a hackneyed plot full of holes.

The fun starts with Omar Sy (of Lupin, lovable nonetheless) getting the crap beaten out of him by a Mixed Martial Arts fighter in a cage. In desperation, he finally calls for backup—and the backup gets lost. It’s one of the film’s better gags. This gang of heavily-armed policemen arguing over the blueprints they’re consulting end up in the garbage room. Despite some funny moments, irritating characters, a tired and predictable plot, twists you see coming from a mile away, and half-assed attempts at relevance, this film is mediocre at best.

Sy plays Ousmane Diakité, the kind of tough cop who likes to fly solo, go rogue, break a few rules to get the job done. (Hence, the late call for backup.) When his defeat of the MMA fighter—of course he ultimately crushes him—goes viral, the department PR team announces Ousmane will be the new face of the Paris PD. Perfect: a hot Black cop in recruitment ads to win over immigrants and people of color who are more likely to flee the cops than call them for help.

Meanwhile, Ousmane’s former partner, François Monge (Laurent Lafitte), is having professional trouble I didn’t entirely grasp. In any case, he’s been sent to a shrink who sees him for the idiotic blowhard he is and sleeps with him anyway, because this is the kind of big dumb buddy cop comedy where women are either objects of lust or ridicule, many of them naked. In one scene, Monge watches the bad guy’s hot wife showering for what feels like half an hour when they’re supposed to be searching for clues. In another, he lifts a dead guy’s limp dick to examine his balls for track marks. Vive la France!

When Monge stumbles upon a severed body on a train and Ousmane is called to the scene, the mismatched former partners are reunited to investigate. Et voila—it’s Lethal Weapon in French. Bickering all the way, Ousmane and Monge travel to the dead guy’s quaint mountain village deep in the heart of Marine LePen country and meet the pretty cop Alice (Izïa Higelin) who will provide local support. Needless to say, our guys both have the hots for her, Monge going all suavé and Ousmane transforming into a stammering teenager who’s apparently never spoken to a woman before—even though he has a grown son.

The severed body leads the team to a meth lab. The super-powered drugs lead to a gang of neo-Nazi goons. The goons lead to corrupt cops and politicians. And so on. Along the way Ousmane and his dopey pal encounter bipolar dogs, interminable car chases on perilous roads—bickering incessantly, even while their lives are in danger—and bombs set to blow up innocent immigrants. True to the genre, once the case is closed (a little too neatly) and Ousmane insists on going rogue, the guys unearth a vague terrorist plot that involves trucks full of ammo and an evil, singing white nationalist grandma. Not only that, but our heroes are stuck in a hotel room together with only one bed–and François sleeps sans culottes! Which, évidement, seems to rile Ousmane more than the Nazi tattoos and killer hooligans.

By the time Ousmane is chasing a potential perp through a supermarché in a bumper car, the two throwing roasted chickens and stuffed animals at each other, I’d had enough. But I continued to plow through the neo-Nazi rally, a smorgasbord of moronic arguments, and one hell of a decapitation—is there any other kind?

Everyone clearly had a lot of fun making this movie and there will be viewers who appreciate the nonstop action and frat boy humor, but I prefer Omar Sy playing a gentleman thief. Thankfully, the third season of Lupin is a mere six months away.

The Takedown is streaming now on Netflix.