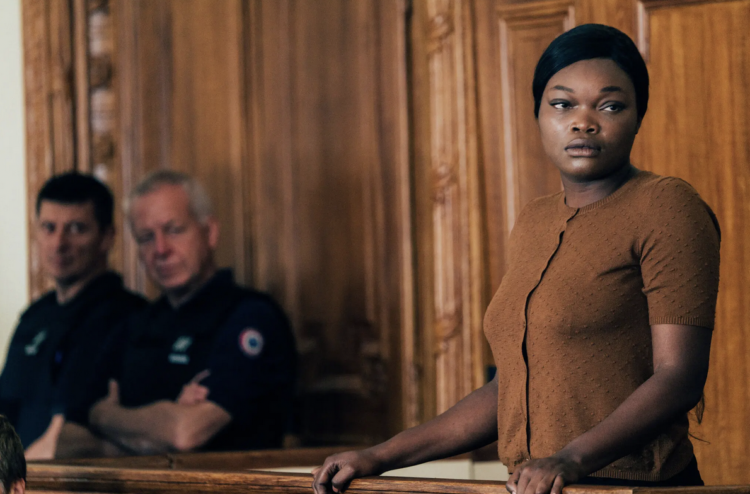 In November of 2013, a Senegalese-French woman named Fabienne Kabou killed her 15-month-old daughter, Adélaïde. With her baby in a stroller, Kabou took the train from Paris to Berck-sur-Mer, a small town in Northern France, and left the child on the beach to be swallowed by the waves. The baby’s body was found the next day by a fisherman. Filmmaker Alice Diop became obsessed with the highly publicized story. It wasn’t just the burning question that plagued her as it did everyone: How could a mother kill her child?

Diop became fascinated with Kabou’s story. Kabou was an incredibly intelligent woman who had immigrated from Senegal to attend college in France and had later become a PhD candidate living with her boyfriend, a white man, and a sculptor, 30 years her senior. Their daughter was of mixed race. Diop herself was born in France to Senegalese parents and so she bristled at the way the stories about Kabou mentioned how well-spoken she was, as if everyone expected less from an African immigrant.

Driven by her obsession, Diop attended Kabou’s trial in Saint-Omer, in the Nord-Pas de Calais region of France. She was self-conscious from the moment she got off the train in the depressed, provincial town. As a young Parisian woman of African descent, she felt as if all eyes were upon her. By the end of the trial, Diop knew she would make a movie about the case. While she had previously made only documentaries (We, La Permanence), Saint Omer is a narrative feature. The film was the recipient of both the Silver Lion – Grand Jury Prize and the Lion of the Future “Luigi de Laurentiis” Award for Best Debut Film at the 2022 Venice Film Festival and is France’s official selection for Best International Film at the 2023 Academy Awards.

In the film, Rama (Kayije Kagame), a novelist and literature professor, attends the trial of Laurence Coly (Guslagie Malanda), a woman who, like Kabou, has confessed to killing her child. We open with a few scenes of Rama’s life in Paris. She teaches a class on Marguerite Duras. She and her supportive and likeable white husband have dinner at her mother’s home, where the mother-daughter tension runs thick. Then she’s off to Saint-Omer to attend the trial, as part of her research for the book she is writing about a modern-day Medea. The serious, striking Rama is both a proxy for Diop and the viewer’s eyes and ears at the trial.

From the moment Laurence enters the courtroom, we are struck by the accused. Like the woman who inspired the character, Laurence is extremely articulate. Her eyes are serious and hard, off-putting in their lack of emotion. We see no signs of remorse or sentimentality in her comportment. Laurence has confessed to killing her daughter, Elise, but she pleads not guilty. While she admits to believing that killing her child “would make life easier,” she doesn’t feel responsible for the crime. Instead, she blames sorcery, convinced she was cursed by her family and the family of her boyfriend.

The judge (Valérie Dréville) questions Laurence about her childhood, during which she felt pressured by her parents’ obsession with her success, and her move to France to escape them. After several challenging years studying and living with family, Laurence falls in love and moves in with an older man, Luc Dumontet (Xavier Maly), who she claims denied their child’s existence. When questioned, Luc says he was “the happiest man on earth” when the three of them were together and accuses Laurence of becoming jealous and paranoid. He calls their relationship “une histoire d’amour qui a mal tourné” and admits he feels partially responsible for the death of their child, in that he didn’t protect her from her mother.

Diop’s background as a documentary filmmaker is evident in the film’s observational style. When a witness is questioned, we remain on his or her face, allowing their testimony to be delivered in its totality. Diop’s director of photography, Claire Mathon, rarely cuts to a reaction shot for emotional impact. We simply watch as the scene plays out, the story slowly and honestly being pieced together through the testimony. Occasionally we cut to Rama. Like when a colleague mentions her surprise that a student of African origin, such as Laurence, would choose to write her thesis in philosophy on Wittgenstein, Rama shoots bullets with her eyes. At one point, Laurence and Rama’s eyes meet, as if an invisible thread connects them. When Laurence smiles at her, Rama looks away, her eyes filling with tears.

Outside the courtroom, Rama quietly falls apart, as Laurence’s story seizes hold of her consciousness. Her hands find their way to her belly, and we learn she is pregnant. It’s a pregnancy she’s kept secret from her mother. Alone and expecting her own child, she is haunted both by Laurence and memories of her now estranged mother (Adama Diallo Tamba). In one flashback, they pass each other in the kitchen. Without a word, her mother places a bowl, milk, and Nesquik on the table, leaving young Rama to make chocolate milk alone in the night. There is nothing but silence between them. In another flashback, her mother weeps alone on her bed, while putting on jewelry, suggesting hidden sadness—or demons.

In the courtroom, we learn that in the years leading up to her pregnancy, Laurence had become increasingly isolated, to the extent that she never left Luc’s apartment. She heard voices and had troubling dreams. She never saw a doctor about her pregnancy and delivered the baby alone at home while Luc was out of town. The prosecuting attorney, who comes off as a mean, mustache-twirling villain, accuses her of lies and manipulation, of seizing upon the idea of sorcery to avoid taking responsibility for her crime.

As far as the court scenes are concerned, Diop’s script, which she wrote with Amrita David and Marie Ndiaye, follows the court transcript almost word-for-word. There is a moment, however, that sprung entirely from the screenwriters’ minds. The closing argument delivered by Laurence’s lawyer (Aurélia Petit) is a tour de force that takes on Laurence’s isolation and invisibility, her madness, terror, loneliness, and inscrutability. The attorney tells the court that Laurence knows that her daughter will always be with her. “We know that during pregnancy, the mother’s cells and DNA migrate to the fetus,” she says. “What’s less known is that during pregnancy the child’s cells also migrate toward the mother’s organs. They lodge themselves in her body, from her brain to her toes. Even after birth, even if the pregnancy isn’t carried to term, the cells remain in her body, sometimes throughout a woman’s life. A mother and child are thus intertwined with one another in an inextricable manner.” 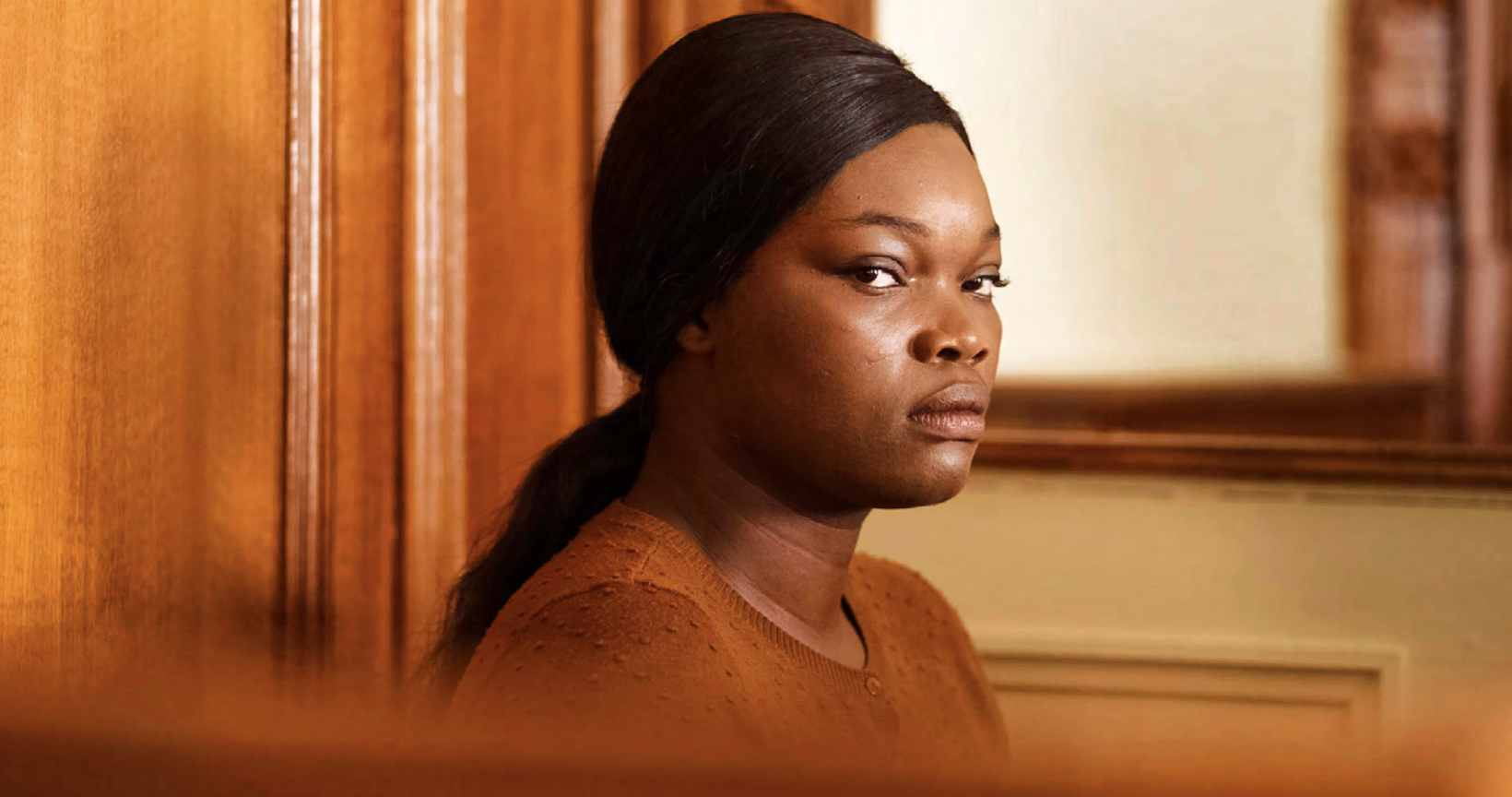 If you’re looking for an easy answer to the questions that beg to answer why Laurence Coly—or Fabienne Kabou—killed her baby, you won’t find it in this film. That might be frustrating. But Alice Diop is not interested in easy answers. The film refuses to cast this woman who has killed her child as a monster—or a victim. Portraying her as a poor immigrant pushed to this heinous act by the expectations of her parents, systemic racism, or the neglect of her lover would fail to take into account this woman’s complexity. Diop said in an interview that turning Kabou into a victim “diminished all her violence, all her fire, all her rage, all her revolt, all her ugliness…That narrative doesn’t restore her power, including that which is more shadowy, dark, violent, and which I don’t judge, but which I wanted to give back to her.”

Saint Omer does not let Laurence off the hook, but it does embrace her complexity—and her humanity. While it’s a stretch to agree with her lawyer that all women are monsters, the film makes clear that we all, even those who commit monstrous acts, deserve to be recognized as human, as not entirely knowable, as containing multitudes. 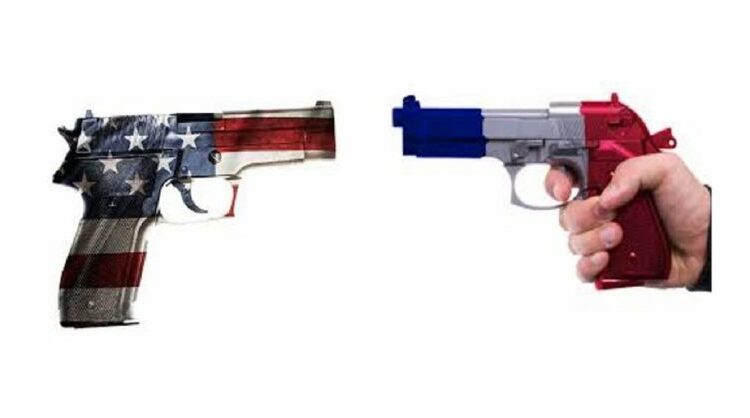 Firearms in France: How is the Situation Different from the U.S.? 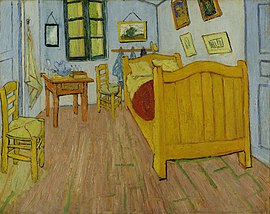 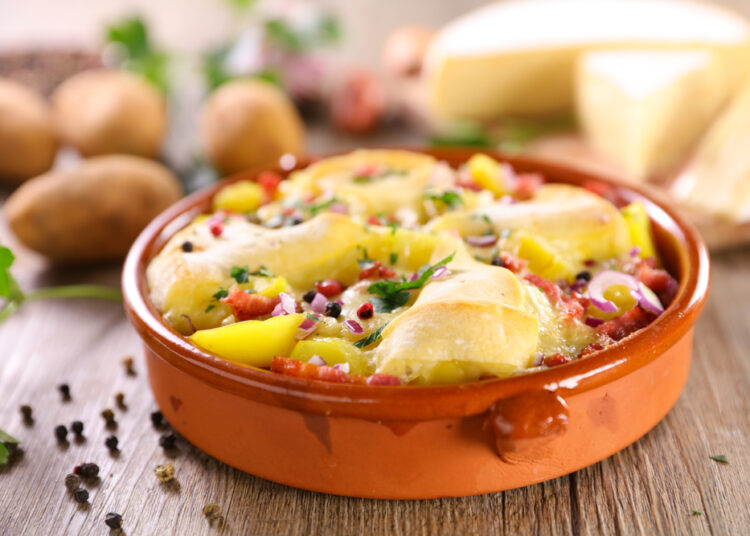 9 Cozy French Dishes to Get You Through (Another Covid) Winter 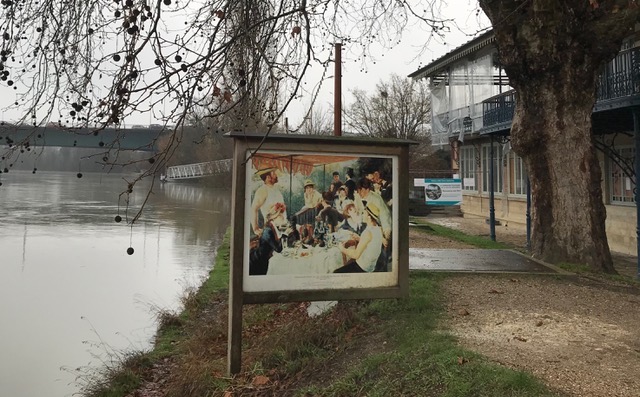 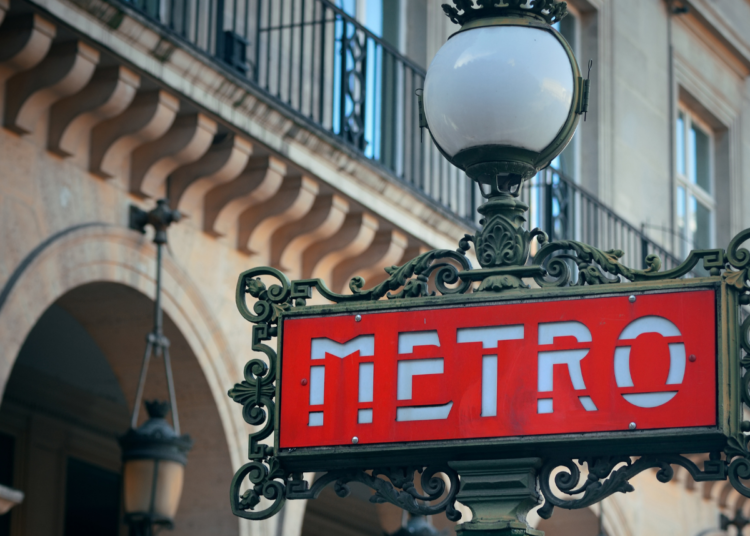 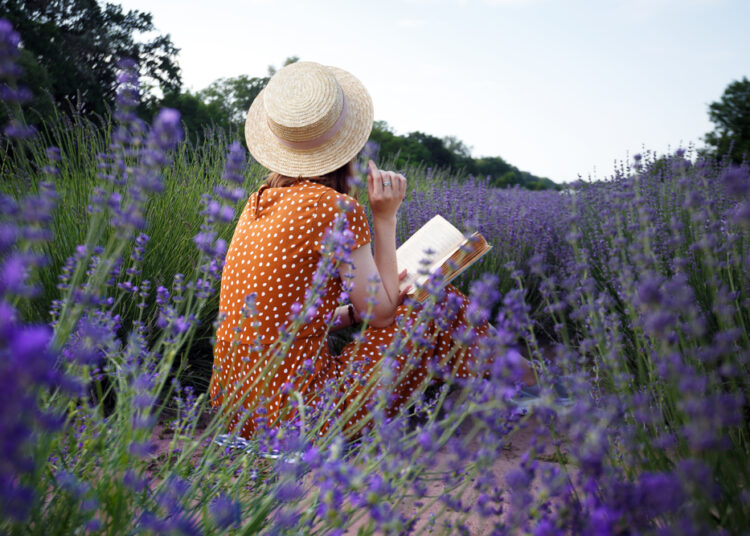 18 Curious Facts in the New Book, An Insider’s Guide to Provence 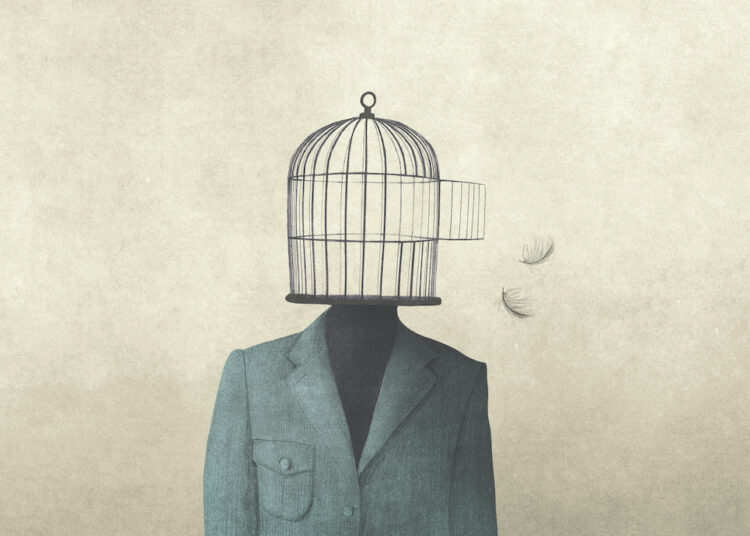 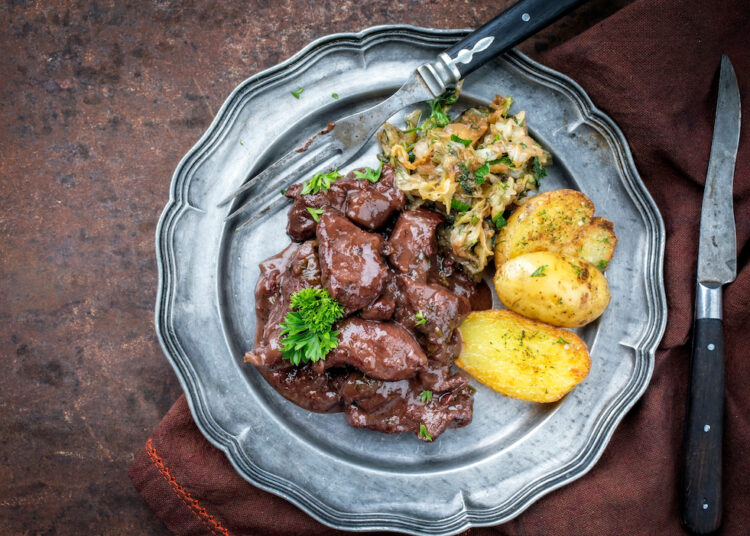