Fashion icon agnès b. is looking forward to exhibiting her “father,” Ivorian artist Frédéric Bruly Bouabré, at her Galerie Boutique, opening this week. “He’s really a great artist. I love him; he called me his daughter and signed [his pieces] ‘Your father, Bruly,’ she recently told French journalist and art writer Judith Benhamou-Huet.

Of course, the pair aren’t actually related — agnès b. was an early collector of the celebrated artist, who passed away in 2014. His work is being shown at her flagship store in New York City’s Soho — a neighborhood where fashion and contemporary art mingle as naturally as they do in her trendy space at 50 Howard Street — as well as the Museum of Modern Art this month.

“Philosophical, human, poetical, generous, full of spirit, full of love for people, that’s the way I’d describe what he did,” the designer told Benhamou-Huet.

Bouabré (1923 – 2014) focused his art on preserving and sharing knowledge he gleaned about the world; particularly, about the history and culture of the Bété people of his native Côte d’Ivoire. His subjects ranged from cultural and religious traditions to women’s rights and current affairs, with primary motifs including fruit and family as well as animals and death, all vibrantly rendered. 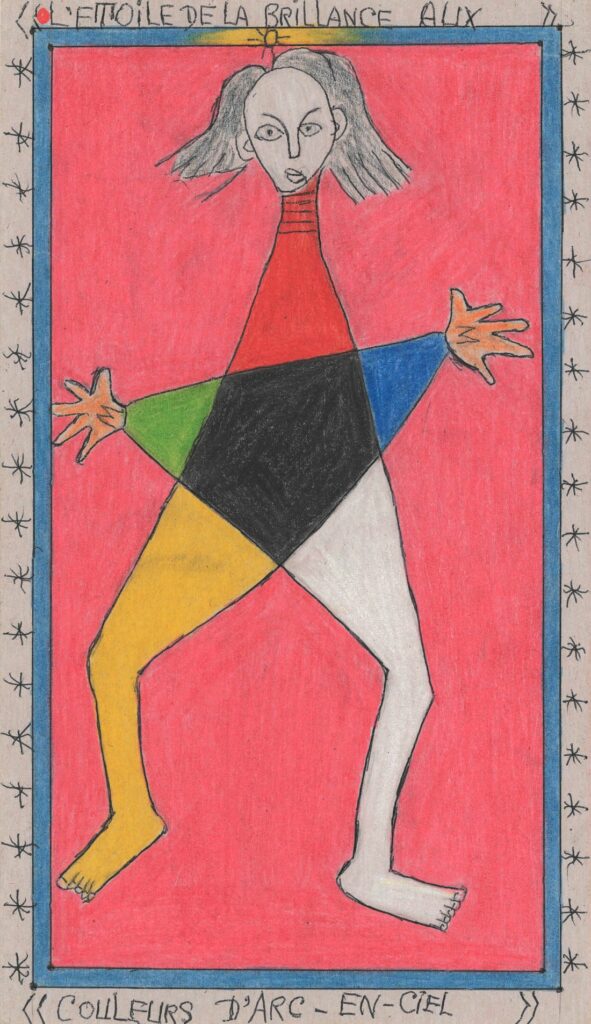 Perhaps most famously, Bouabré used his drawings to invent the first writing system for the Bété people, a 448-character syllabary that he hoped would become a universal language capable of expressing human sounds across languages and thus bring people together across cultures. Each character in the language represents a syllable, rather than a letter or phrase; his unique alphabet system prompted his reputation as the “new Champollion,” the French philologist who first deciphered Egyptian hieroglyphs.

The exhibition at Galerie Boutique, which runs from March 11 – May 15, 2022, features 65 brilliantly-colored pen and pencil drawings on postcard-sized pieces of cardboard, which was the iconic Ivorian artist’s preferred medium. Pieces from agnès b.’s personal collection will also be on display, including works on paper made especially for her and for the artist’s famous 2001 series, Mythologie Bété.

The designer, whose Galerie du Jour has represented the artist in France since 2000, has also lent one piece from her collection to the coinciding exhibition on Bouabré at the Museum of Modern Art: 2007’s Hommage aux femmes du monde, a 200-piece collection of postcard-sized pen and color pencil drawings on cardboard.

Many of these pieces were drawn on packages of hair products the artist found around his neighborhood of Abidjan, according to MoMA.

“It’s an honor to be able to show pieces for Bruly there,” the designer told Benhamou-Huet.

Frédéric Bruly Bouabré: World Unbound will run at MoMA from March 13 – August 13, 2022, and is the museum’s first exhibition dedicated entirely to an Ivorian artist. The in-depth retrospective will feature over 1,000 individual works, highlighting two of his most famous series: Alphabet Bété (1990–91) and Connaissance du monde (1987–2008).

The former documents his experiment with transmitting a pictorial language, while the latter is a decades-long catalog of the artist’s experiences of the world, initially prompted by a revelatory vision in March 1948 in which he found himself transformed into a new self: Cheik Nadro, or “he who does not forget.”

“I do not work from my imagination,” he said of the inspiration for his work, according to MoMA. “I observe, and what I see delights me.”