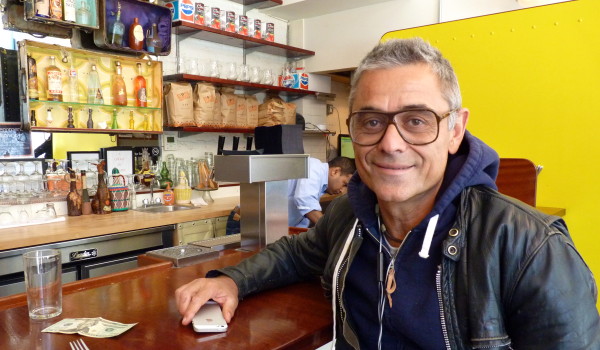 All it takes is a few minutes in Michel Cohen’s company before he is accosted by all sorts of passers-by. Former patients, mothers of current patients and “old friends” alike come up to greet the tanned and amiable pediatrician sporting a leather jacket, and looking more like a swanky photographer than a doctor.

Michel Cohen is a well known figure in Tribeca and his Mediterranean bistrot Saleya, which he opened in 2013 on West Broadway, bolsters his reputation even more. “My idea was to open a place for regulars hang out. It was a childhood dream,” he admits. His patients often come to grab a bite. Sitting at the counter, he nevertheless acknowledges that this venture, far removed from his field of expertise, is not an easy one.  “Constant quality assurance is required, and even when there are plenty of clients, profits margins are low.”

After decades of running his own flourishing pediatric practice, the feel of financial uncertainty is quite a change of pace. It all started 25 years ago when, as a young graduate from the Nice school of medicine, he decided to follow his American girlfriend to New York.  After passing the equivalency exams in the United States, he opened Tribeca Pediatrics, in a neighborhood which, at the time, was just beginning to undergo changes. Little by little, the “French Doctor” built a strong reputation among French expats and so-called bourgeois bohemians who transformed the neighborhood’s workshops into fashionable lofts.

Dr. Cohen began to promote nonconventional methods such as few prescriptions and a small number of antibiotics. “In the United   States, medicine is very defensive. When treating their patients, doctors make sure they do everything to avoid a malpractice suit. I’ve never run my practice that way.” He also supports French “laisser-faire” parenting methods like letting the child cry it out at night, avoid over-scheduling children with activities, and generally not making everything revolve around your child.

It appears to be a winning recipe, especially since Tribeca Pediatrics has grown tenfold and is becoming a brand name. Today he employs a staff of 200 (including 40 doctors) in his 15 offices, and he’s been mentioned by such celebrity mothers as Natalie Portman, Edie Falco, Heidi Klum, and Jennifer Connelly. Cohen’s small empire has enabled him to buy a house in Gowanus (an industrial neighborhood in Brooklyn), and spend quite a bit of time in his second home in the Dominican Republic. “I love surfing,” says the 50-something father of three.

He continues to see patients once a week, and dedicates himself above all to developing Tribeca Pediatrics.  His plans currently include the opening of new offices in California (where he already opened two last year), and New York in the neighborhoods of SunsetPark, Forest Hill, Ditmars.  “My clientele are the middle-class or the bobo upper-middle-class who are moving into up-and-coming neighborhoods.”  But will there be an ensuing demand? “Of course,” he says.  “Many doctors think that their skills speak for themselves. But their reception desk is awful, the posters are horrible.  Such details are important.  For instance, our offices send each patient an e-mail explaining the details of his/her visit.  I always try to improve on the protocol for receptionists, and we give a lot of training.”  In the Tribeca office on Warren Street, patients await their appointment in a space more reminiscent of a showroom than a waiting room.  Children play with wooden toys under designer lighting with pop music playing in the background.

Michel Cohen also has another project in the works: opening offices in under-served neighborhoods, like East New York and the Bronx, thanks to funds raised by his new foundation. But even with an eye towards service, Cohen doesn’t loose his entrepreneurial spirit. “A profit can be made even with Medicaid patients,” he says, “In this case, however, the aim would be to reinvest into the community to help local schools.”