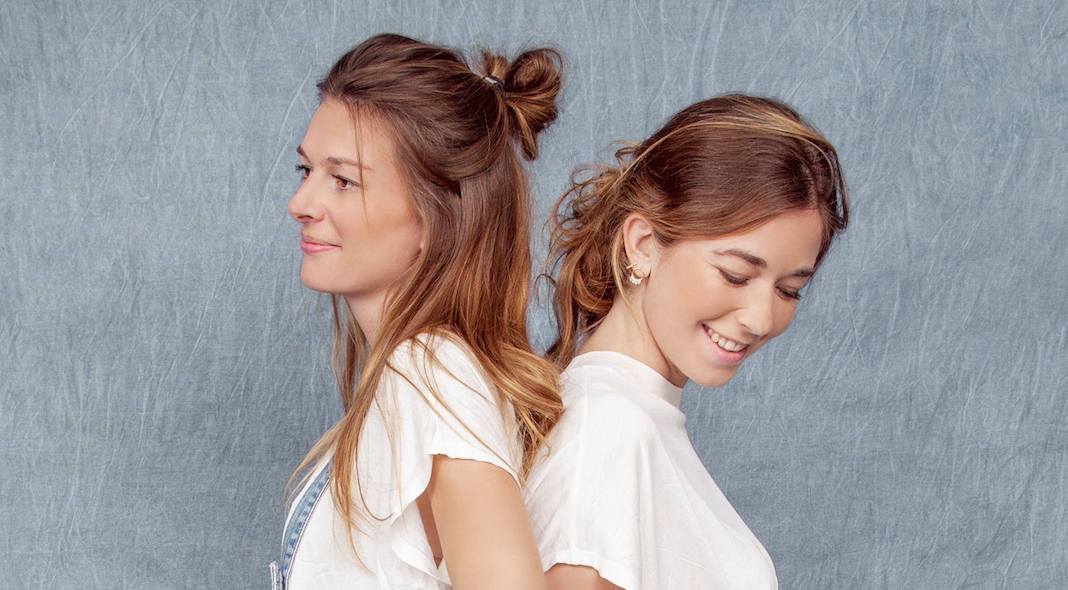 Jacinta and Anne, the duo behind Les Frangines, have been friends for so long that they’re practically sisters.

They met at the age of 12 on the way to school, in the Paris region, near La Celle-Saint-Cloud. Jacinta studied flute at the conservatory for 15 years. Fans of French music (they love Joe Dassin, Pierre Bachelet, Goldman, Dutronc…) and with a high school diploma in their pockets, they both went on to study literature and go abroad in Valence (where they’re called “las hermanas,” the sisters in Spanish, hence their nickname), then headed to Angers, where they began to compose melodies and texts on friendship, love, family, and even the situation in Aleppo. Their French pop-folk variety music is joyful, sweet, and sensitive. Songs that are meant to be comforts in the hard times of life.

Once they finished their senior year, armed with guitars (they learned to play using the internet), Les Frangines began posting covers on YouTube (“Comets” by Cocoon, “Vivre” by Sclérose, “La Déclaration” by Debout sur le Zinc, “L’Amitié” by Françoise Hardy…) and launched a crowdfunding campaign on Ulule that allowed them to raise the needed 810 euros exactly to record their first song, “Demain dès l’aube,” a setting to music of a poem by Victor Hugo, reflecting their literary tastes. “We had a lot of feedback from schools, from students who were learning the poem with our song,” they say. Jo & Co (the label of Zaz, Elisa Tovati, and Rose) discovered and signed them. The duo opened for Claudio Capéo, shot more videos, recorded songs for their first album. That’s when they decided to approach the singer Vianney. “We contacted him because we love his music, he seemed cool and we wanted him to give us advice. But the meeting exceeded our expectations. Last September, we met to write a song together. In one morning, “Donnez-moi” was written. We’ve been friends ever since.” The track was played on the radio all summer and the music video has more than 8 million views on YouTube.

At 26 and 27 years old, Les Frangines released their first album on June 21 and will be in concert at the Trianon on December 1 (sold out), at the Olympia on February 28, 2020 (also sold out) and on several other dates (which are not yet sold out). “On stage, even if we are accompanied by three other musicians, we want to play music that looks like us, with a guitar-voice base. With our scenographer, we worked on creating a warm and intimate setting, with rather warm lights. And for the stage outfit: overalls, of course!” they confide, laughing. “It’s the dress code for our concerts. People talk to each other about it, in fact, because they have something in common… We love it so much, we even want to create our overalls brand.”