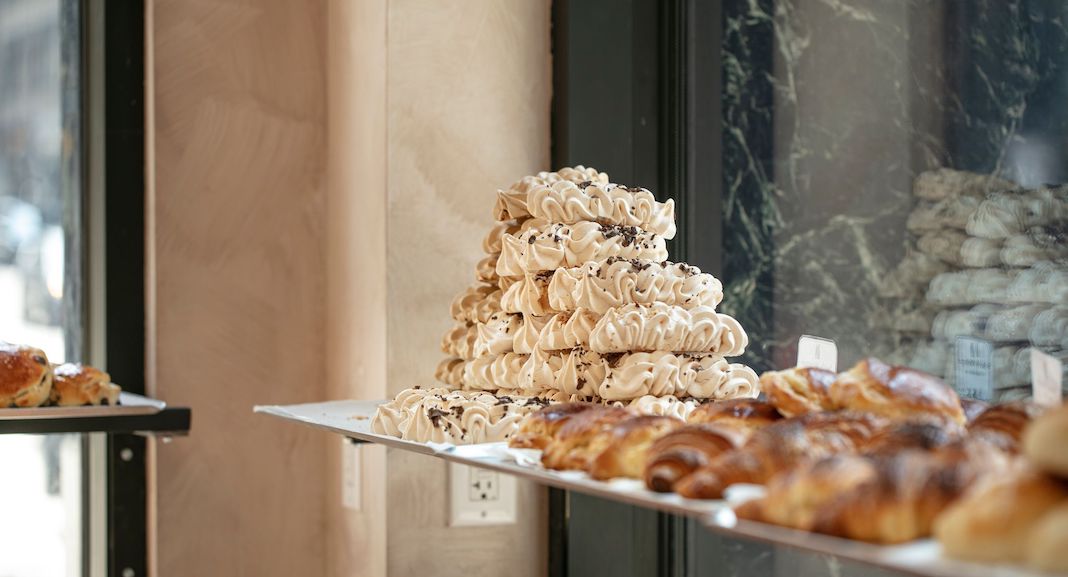 How Merveilleux de Fred Became Marvelous by Fred in NYC

Photos: Courtesy of Marvelous By Fred

The Aux Merveilleux de Fred pastry delights are little clouds of heaven, landed on this mortal land via Lille, France and now also available in New York City. The merveilleux (or those that are marvelous) are the results of a recipe perfected by founder, Frederic Vaucamps, and are all spin offs of a simple concoction: they combine a lightly whipped melt-in-your-mouth-meringue with a filling offered in six original flavors.

I tried my first whipped cream and chocolate merveilleux when I was studying at the Sorbonne in Paris’ 5éme, 7 years ago. I soon learned that while I had only tried my first merveilleux at the age of 18, Pâtissier Frédéric Vaucamps had started his baking career at a tender age of 14. The Merveilleux, a kind of meringue cake that hails from Belgium, is sometimes called a “bombe,” and is a layered confection with, often, some kind of whipped, or Chantilly, cream and chocolate flavoring.

Vaucamps was not initially pleased with what he thought were imperfect recipes for the merveilleux pastry and sought to create his own perfect version. Through what Vaucamps has called a series of “luck, failure, experiments and success,” he eventually developed a “perfected” recipe, resulting in “lighter, airy cakes with melt-in-your-mouth meringue,” explains Antoine Jacques, President and Baker at Marvelous By Fred in New York City.

Jacques tells me, over email, that the perfected delight is actually under 100 calories, gluten-free and does not contain butter, oil or dough. The brand also makes exceptional brioche studded with chocolate chips, croissants, and more. But the merveilleux remains a cult favorite. So what is its secret?

“Freshness, quality, and lightness of the perfected recipe are at the forefront of Marvelous by Fred pâtisseries across the globe,” says Jacques. Marvelous by Fred’s Merveilleux are offered in six original flavors and one seasonal flavor, including Le Merveilleux (classic), L’Incroyable (white chocolate), L’Impensable (coffee), L’Excentrique (cherry), Le Magnifique (nut),  and Le Sans-Culotte (caramel). Each comes in a semi-egg-shaped form and is easily enjoyable in a single bite.

Chef Fred first opened his brick-and-mortar in Lille in 1995, followed by a 2008 storefront in Paris. Marvelous by Fred first made its appearance stateside as a pop-up shop at the Bryant Park Winter Village in NYC. It then opened its cozy storefront in the West Village with to-go options. Today it celebrates its second storefront in Manhattan–and its third location in North America, and 46th location worldwide. The bakery has 45 international locations spanning from Paris (15 location) to Northern Europe (six in Belgium, three in London, two in Geneva,) to Canada.

Aux Merveilleux de Fred is now considered the fastest growing high-end artisan pastry brand in the world. While the pandemic saw Maison Kayser shuttering all 15 of their NYC storefronts and Le Pain Quotidien closing 5 of their outposts, Merveilleux de Fred was able to expand and take the helm as one of New York’s premier pastry shops.

It’s newest location, Marvelous by Fred, is located at 1001 6th Avenue, just off the northwest corner of 37th street and 6th avenue in Midtown Manhattan. The menu features all the favorites as well as brioches, French sandwiches, waffles, and distinct croissant variations. And as a collaboration with the city, Marvelous de Fred is also serving La Colombe coffee. Limited seating is available.