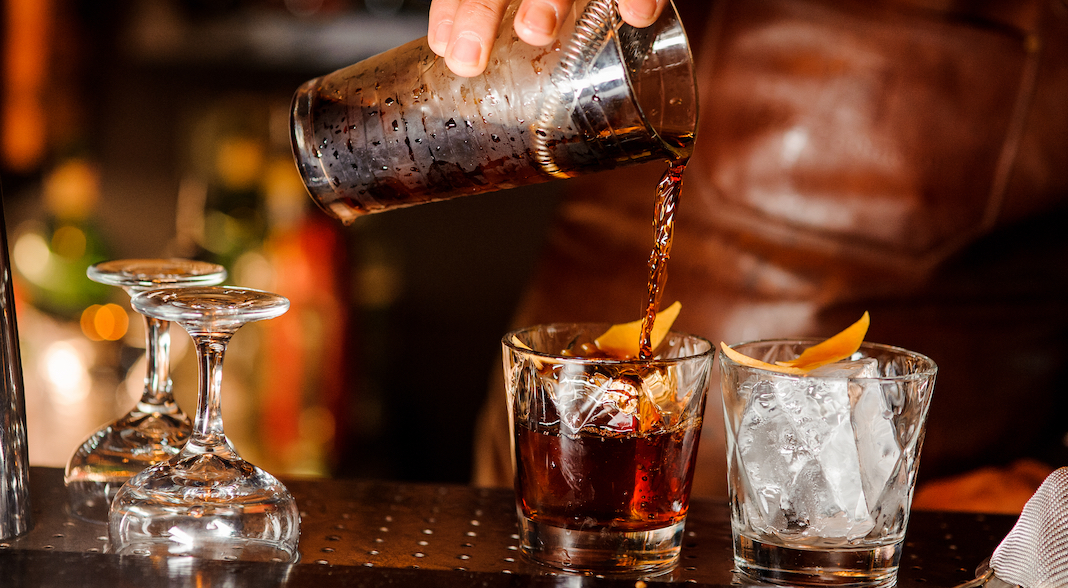 Up until the 1920s, the cocktail was a purely foreign concept to the French. In fact, the first ever French book on cocktails, published by Emile Lefeuvre in 1889, was titled, Méthode pour composer soi-même les boissons américaines, anglaises, italiennes, etc. (“Methods for making yourself American, English, and Italian drinks”). After all, the French had their wine — what use could they have, then, for rye, gin or tequila?

Prohibition in the United States changed this, however, prompting bartenders, bar owners, and the jet set to decamp to Paris for wetter pastures. While temperance reigned in America, extravagance was king in France, and out of the lust for liquors and liqueurs that ensued, France’s capital and its Southern shores became the site of a cocktail boom to end all cocktail booms.

In Franck Audoux’s book, French Moderne Cocktails From the 1920s & 1930s, Audoux says that cocktails “developed in the purely French tradition of the Parisian café.” But in fact, this phenomenon was uniquely multicultural.

Though created in France, for French bars, using French ingredients, many of these cocktails were invented by American, Irish and British bartenders like Jimmy Charters, who ran things at La Jungle, and Harry MacElhone and Bob Card, of Harry’s New York Bar.

Not everyone was a fan of this influx of expats and their foreign commodities. “Imported from America, consumed out of snobbery, the cocktail was part of the Americanization of French society, like cigarettes and jazz,” noted Andoux. French wine companies even launched a series of anti-cocktail advertising campaigns, supporting a “National preference” for their homegrown product, similar to the anti-absinthe campaigns of the late-19th century.

Needless to say, a few posters weren’t going to stop the roiling cocktail fetish raging from Montparnasse to the beaches of Biarritz. So a few French liqueur companies took things into their own hands: Suze, Pernod, Cointreau, and Noilly Prat decided to capitalize on the cocktail fad by inventing and promoting beverages made with their own product. Thus, drinks like the Side Car, the Cocktail France, and the Alaska were born.

So if you’re thinking of mixing yourself halfway to the Ritz Paris, here are a few Jazz Age French cocktails, and the Anglophones who popularized them.

Many American journalists took up residence in Paris in the 20s, using expat bars as meeting places. After the initial publication of The Boulevardier magazine, named after the cafe dwellers on Paris’s grand boulevards, one such American journalist, Erskine Gwynne, created this cocktail to honor the paper’s debut. Learn how to make it here.

Though the gin martini had been in existence for quite some time, Frank Newman’s 1904 French-language cocktail book, American Bar, redefined the drink as the one we know today (i.e., a lot of London gin and just the tiniest splash of French vermouth). Ideally, of course, Noilly Prat vermouth.

A popular drink of the day, the Monkey’s Gland was a nod to Dr. Serge Vornoff’s experiments to improve virility in men, notably by grafting animal testicle tissue onto patients. Whether or not it worked is up for debate, but this creation of Harry MacElhone, the Londoner who led expats everywhere to Sank Roo Doe Noo, is just as potent as it was back in the day.

This cocktail won first prize at the International Championship of Professional Bartenders in 1929. Parisian bartenders were the first in the world to unionize, and held extremely popular cocktail contests, which were often sponsored by French beverage companies like Pernod and Bénédictine. This one was the creation of Bob Card, the master cocktail ace at Harry’s New York Bar.

Frank Meier was born in Austria and trained in New York, but his tenure as bartender extraordinaire of the Ritz Paris made him one of the preeminent names in mixology in the 20s and 30s. In 1936, he even published what could be called the luxury hotelier’s bible, The Artistry of Mixing Drinks, which contained, “the most varied kind of information, from the way to serve wine to different time zones, from a list of toxicides to a chronology of horseracing” (Audoux, 162). This cocktail was one of the first to use honey in place of simple syrup, yet another credit to Meier’s ingenuity.