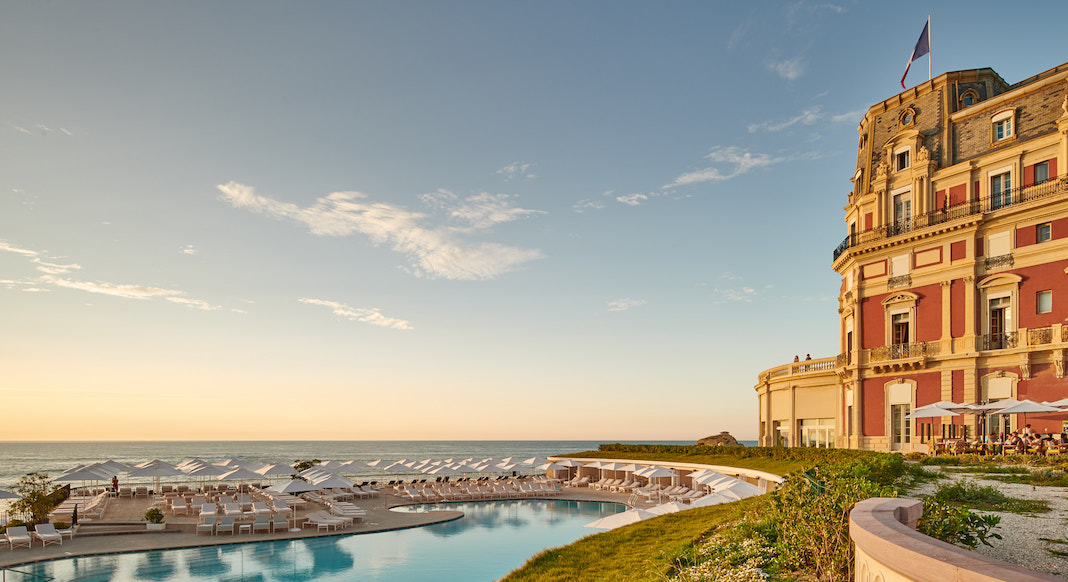 Hotel du Palais Biarritz Prepares for the Arrival of the G7

Alessandro Cresta, the new director of the Hôtel du Palais in Biarritz, greeted his clients with a smile on June 30, the first day of an exceptional season. The hotel, inaugurated in 1855, was opened for three short months of operation between two major phases of work and the G7, held this year from August 24 to 26.

The issue of a renovation and seven heads of state together does not seem to worry Alessandro Cresta: “They are customers like any other. For us, this is part of the hotel business.” Behind the scenes, the situation is a little more unique… “During a G7, the hotel teams no longer have control over operations. We borrow the establishment from them for a few days and carry out major work. Despite pierced walls, wiring in every corner, security installations, the establishment is still as it was found,” explains one of the Canada’s World Affairs advisors, the equivalent to the United States’s Department of State. “During the G7 meeting in Quebec last year, the official meeting room, which was a historic lounge, had to be repainted in blue-gray at the last minute because one of the delegations did not like the yellow walls. They feared that their head of state would appear livid in front of the television cameras…”

On August 24, Emmanuel Macron will welcome Angela Merkel, Shinzo Abe, Donald Trump, Boris Johnson, Justin Trudeau and Giuseppe Conte under the panelling of the Second Empire salons (whether they’re painted or not!). There is no shortage of diplomatic issues, between the first moves of the British Prime Minister, the herald of a rapid Brexit; tensions between France and the United States over the GAFA tax; or the risks of conflict with Iran…

“Renovate without disrupting.” At the end of June, however, the atmosphere was serene in Biarritz. “I found the establishment in perfect working order thanks to the high professionalism of the teams,” explains Michel Morauw, manager of the Hyatt group in France, in charge of operating the Biarritz hotel. The palace is packed with its employees, housekeepers and chef, all scanned by the security services. The presidents and prime ministers invited to the summit will discover the dishes prepared by Jean-Marie Gautier, Meilleur Ouvrier de France. The brigade can expect a few surprises. “When Donald Trump and Kim Jong-un met at the Capella Hotel in Singapore in June 2018, I had to prepare the official lunch on a tiny stove. Everything had been taken away from me in order to limit the risks, and all the dishes had been tasted many times. One of the most important lunches of my career was held with almost nothing at my disposal and in a tiny room!” remembers David Senia, the French chef who heads the kitchens of the Asian establishment.

The Heads of State will probably not know anything about what has been happening in recent months at the Hôtel du Palais, whose renovation project has involved unexpected political forces. And for good reason, the palace is a unique case; it has belonged to the Biarritz town hall since the 1960s. “The Biarrots are very attached to it, it is a public good,” comments Morauw. In 2018, the City Hall entrusted the five-star walls to Socomix, a semi-public company, through a 75-year emphyteutic lease, which ensures that Socomix must improve the property with construction and renovation, against a backdrop of a divided municipal majority. For the renovation, Socomix selected the architects of the COS Workshop. Maestros of large-scale building renovation, Valeria Sanchez and Didier Beautemps, whom we must thank for the rebirth of the Ritz in Paris, restored the old dame hôtelière in record time, even handing structures had not been touched since 1955. “For the Hôtel du Palais, several challenges have arisen with major urgent work needing to be carried out: part of the facade and roof, the technical areas in the basement and some forty bedrooms. The most visible will arrive in the second phase with a new bar and a redesigned restaurant. Our objective is to renovate without disrupting these places that belong to the local heritage,” explains Beautemps.

Completion in 2020. The other contract concerns the management of the hotel. Long in the running, the prestigious Canadian brand Four Seasons finally gave way to Hyatt: “We have a collection of establishments within the group called The Unbound that perfectly matched the Hôtel du Palais. Under this brand, we already manage the Martinez hotel in Cannes and we have just completed the restoration of the Hôtel du Louvre in Paris,” says Morauw. “What with the mayor’s desire to have the Hôtel du Palais open all year round, we had to put forward a solid commercial offer. With 850 hotels worldwide and loyal customers, Hyatt aims to meet the city’s expectations: attract new visitors and improve traffic during the shoulder seasons.”

Some rooms will be available for guests starting August 28. Hôtel du Palais will then return to its cruising speed until its next closure on October 1 to continue the renovation work, which should be completed around June 2020.