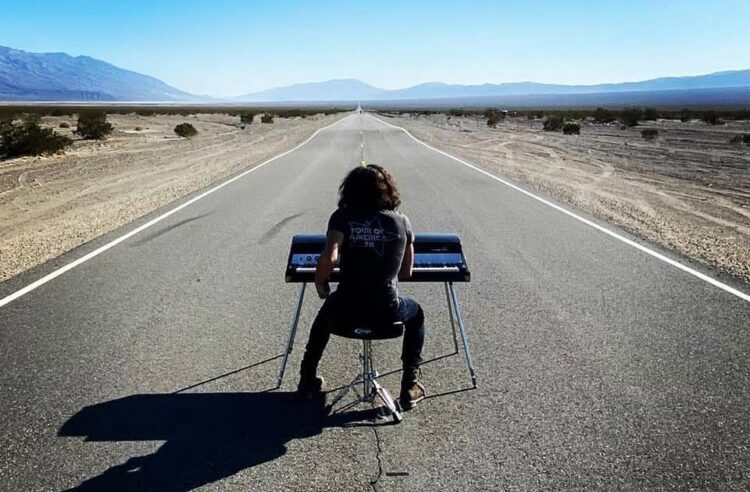 Music is as much a product of place as it is of time. Bagpipes sound insane until you hear them on the misty Scottish moors. Techno, born in Detroit and raised in Berlin, might sound cold and robotic until you experience the flat, gray horizons and identical geometric high rises of these two industrial cities.

So it’s jarring when musicians from one culture land on a foreign musical landscape, as Joachim Garraud and Gaël Benyamin have done in their new EP, California Road 101. Garraud is best known as a DJ and Grammy-nominated producer who came up at the height of the Paris techno revolution, and has worked with artists ranging from David Bowie to Kylie Minogue. He currently runs a record label, Gum Records, with David Guetta, supporting up-and-coming French house music. Benyamin is a singer-songwriter inspired by pop, rock, jazz, and funk music, a prolific producer who has worked on 14 albums in the last 16 years.

In California Road 101 (both the name of the project and the EP), Garraud and Benyamin take inspiration from both French and American artists, mixing French touch, funk, and pop to create an unexpected mixture. Michel Jonasz, the French jazz singer, is the inspiration for the track “Le Flow de Michel,” thanks to his depictions of grand American landscapes in some of his later music. Al Stewart’s “Year of the Cat” and America’s “A Horse With No Name” are also mentioned as specific influences on the track “Je Pars En Solo” (“I’m Going Alone”). There’s also an electronic track, “LAGoodVibe Theme,” named for the mobile studio the record was produced in.

LA Good Vibe is a solar-powered studio on wheels, which “[allows] you to isolate yourself and immerse yourself directly in the wide open spaces of the Californian West.” Garraud has allegedly lived in the remodeled tour bus since 2012, according to the project’s team, allowing him “total autonomy” to record wherever he pleases, off-road and off-grid. The whole thing feels destined for an adaptation into a Seth Rogan stoner comedy about a French DJ roaming California in a live-in van, searching for a new album, something like Zoolander meets The Hangover.

The album itself feels half like a promo campaign for the studio itself, which you can rent for around $3500.00 per day. The music videos for the EP show the tour bus blasting, spaceship-like, through the desert, in a visual callback to Daft Punk’s 2021 breakup video.

The songs are littered with Americana fetishism, largely in the song “Pas la Même Californie” (“Not the Same California”). “I like Steely Dan on CD/You prefer Beyoncé/David Lynch is playing in theaters/You’re the movie of the summer,” Benyamin sings in French, ticking off a specific and incongruous list of cultural references. But despite the formulaic road trip metaphor, fans of L’Impératrice might fall prey to the song’s disco chorus.

California Road 101 speaks to the infallible allure of California, and the French romanticization of America that seems to exist in perfect contrast with American francophilia. France has always borrowed American music traditions a few years behind schedule, from jazz to techno to disco, and this album blends them all together and throws a heaping tablespoon of West Coast nostalgia on top. I’d say the grass is always greener, but the California desert begs to disagree.

Bio: Catherine Rickman is a writer and professional francophile who has lived in Paris, New York, and Berlin. She is currently somewhere in Europe with a fork in one hand and a pen in the other, and you can follow her adventures on Instagram @catrickman.