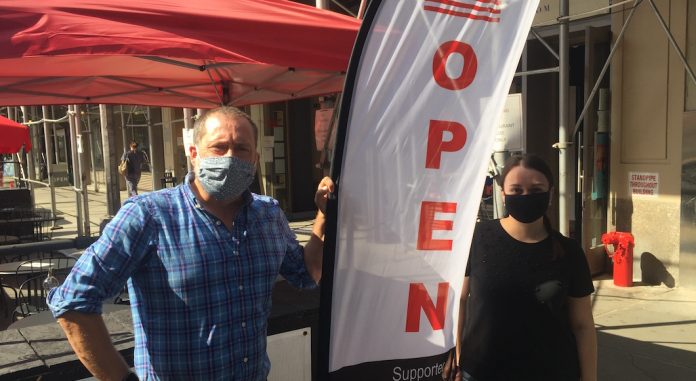 French Restaurateurs of New York: “We don’t know what tomorrow will bring.”

When Armel Joly is asked about his state of mind, he evokes Jean-Pierre Dick, the French sailor who lost the keel of his monohull in the middle of the Atlantic Ocean in 2013. “I’m not in the middle of the ocean, regardless… But for me, we’ve lost a keel and we have to get the boat back to port. And we are not safe from the grain of sand that could tip the boat over,” said the co-owner of the French restaurant OCabanon in Chelsea.

Like other professionals in the sector, the entrepreneur navigates as far as he can see. He has opened a twenty-seat terrace (much smaller than the space inside his two-storey restaurant) and reduced his staff. Fortunately, his French products store, operated in partnership with the French Wink platform, provides him with a lifeline. “You have to accept this situation and get into the idea that you are not alone. My biggest concern today is to hold on,” he confides.

“You have to launch yourself into the unknown,” explains Alexandra Claveau, co-owner with her husband of the Winemak’her wine bar, which opened in the middle of the pandemic in Park Slope. In order to comply with the changing rules set by the City and State of New York, the business owner had to be flexible. Like the bars that launched “Cuomo chips” (named after the governor of New York State) to comply with the ban on serving alcohol without food, she created “Cuomo tapas” to accompany her selection of wines made by French women winemakers. Alexandra Claveau also invested what little money her new business had available into the development of a terrace, but she and her husband had to redo everything after a change in regulations regarding the size of the borders.

Vanessa Pacini, who founded Ange Noir Café in Bushwick, experienced the same setback. Her 12-seat terrace was at the right height and width, but a gap between two planters on the structure caused an inspector to react. “We couldn’t have direct access between the street and the terrace,” she says. She and her husband were able to rectify the situation, but not without spending time and money and a good dose of stress. Today, like the rest of the restaurateurs, she lives in waiting for the authorization of indoor dining. Originally planned for July, the date has been postponed. Recently, New York City Mayor Bill de Blasio suggested that indoor service would not resume until 2021. (It is permitted with restrictions outside New York City.)

To justify his position, de Blasio referred to Hong Kong, where a surge of Covid-19 cases was recorded following the re-opening of bars and restaurants. This argument has not convinced the restaurant owners gathered in the Independent Restaurant Owners Association Rescue. They have threatened the city and the state with lawsuits if indoor catering is not immediately reinstated (with limited capacity).

In the meantime, winter frightens these restaurant owners. “One wonders if outdoor heaters will be allowed. Will the authorities give us the right information in time? Will we have to use gas or propane? Will we have to install tents? It’s very unclear,” continues Pacini, who doesn’t hide her “huge frustration.” “Why do we open gyms and not restaurants? Why do we let customers go to the bathroom indoors when we don’t let them eat?” Spacious, Ange Noir Café could easily accommodate customers indoors while respecting social distancing measures, she assures us. With about forty seats at Winemak’her, Alexandra Claveau also says she is ready. “I’m not even asking for a 50% occupancy limit. Even with 10 people inside, we’ll have space and I’ll get the right quota for us to survive.”

Every day brings its share of closures, as evidenced by the sad list maintained by the website Eater. Among the missing are the French restaurants Augustine, Côté Soleil, RDV, Cassis, and Vaucluse. The French have not been spared penalties, either. The Bar Tabac restaurant on Smith Street had its liquor license suspended for two weeks after inspectors saw unmasked employees in front of the restaurant.

Founder of the Eclair Bakery in Midtown, an expanded version of which opened in 2019, Stéphane Pourrez had to close his establishment for several weeks due to a lack of staff. He has since reopened but has lost 75% of his sales compared to last year and cut his staff by half. He was able to benefit from a PPP loan, but if he wants to turn it into a grant, he has to take back his entire staff. “I don’t see myself bringing everyone back right away. We don’t have the production levels for it,” he says.

However, this seasoned entrepreneur sees reason for optimism. His clientele is gradually returning as Midtown repopulates.

Despite reduced opening hours – restaurants must close at 11pm – Alexandra Claveau has managed to build a loyal clientele and benefits on weekends from the closure of the street to traffic. “It’s day to day. No one knows what tomorrow will bring,” adds Vanessa Pacini. We still love New York. We’re going to fight for our business. Everybody is trying to find solutions.”

For all the regulatory constraints, Armel Joly reminds us that the State of New York authorizes restaurants to sell their bottles of wine – “like liquor stores.” “It’s an area in which we have expanded,” he explains. In his spacious restaurant, several tables have been removed and floor markers installed for a future reopening of the interior. “I remain very positive. Otherwise, we won’t make it.” He recalls that Jean-Pierre Dick, the daring sailor, managed to return safely to port. “His keel fell at 11 pm. He said to himself: I’m going to sleep, eat and not make a decision in the heat of the moment. I’m doing the same thing right now.”