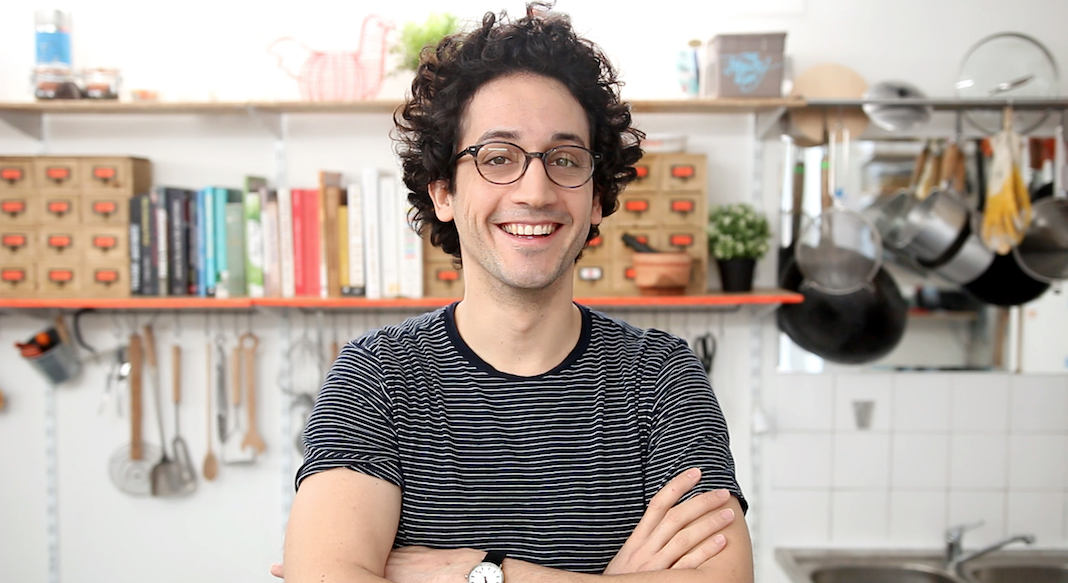 Alex French Guy Cooking Now Has a Cookbook, and It’s Just as Good as His Videos

He publishes videos of his kitchen failures, and he’s also the top result on YouTube in searches for “instant ramen hacks,” “how to make brioche bread,” “canned tuna recipes,” “guide to cheese boards,” and “how to make vegetable noodles without a spiralizer.” From the complicated French dishes to the simple late-night hacks, Alex French Guy Cooking provides the answers.

Frenchman Alexis Gabriel Aïnouz, better known as Alex, has been coaching and encouraging cooks around the world since he first launched his YouTube channel, Alex French Guy Cooking, in 2014. Now, 269 videos and half a million subscribers later, his first cookbook, “Just a French Guy Cooking: Easy Recipes and Kitchen Hacks for Rookies” (Quadrille Publishing), comes out in hardcover on September 4, 2018.

With no formal kitchen training, Alex, like most people, learned to cook through trial and error. His YouTube cooking videos unique in that while most professional chefs’ videos only show the final product, Alex presents the final product and how he got there — the failures, the successes, the learning processes, and the trash-everything-and-start-over’s.

Famous kitchen master (and infamous terror) Gordon Ramsay has a one-minute fifteen-second video about how to chop an onion: he has one onion, which he cuts perfectly (easy, right?). Alex also has a video about how to chop onions: it’s just over eight minutes long, and he chops 19 onions. “We’ve got plenty of onions for the training, we can fail miserably quite a few times,” he assures the viewer.

Though chopping an onion in a short, aesthetically pleasing video may be nice, it’s not reflective of the common kitchen experience. The average chef is much more like Alex, requiring slow instruction, broken-down steps, and lots of practice to master a technique. The signature authenticity and anyone-can-cook mindset of Alex’s YouTube channel is reflected in “Just a French Guy Cooking.”

In 90 recipes and 10 kitchen hacks, Alex presents a wide array of Vietnamese, Chinese, Spanish, Tunisian, Persian, French, and fusion recipes for every meal of the day. “Meatballs done right” teaches a slightly French take on meatballs, “Panzanella, or the art of the stale bread salad” hypes the appeal of an already simple dish, and cooking a whole fish has never seemed so doable until “Any fish, meunière-style.” Ingredients are listed in both metric weights and American measurements.

Well-suited for intimidated beginners, the entire book is notably unpretentious. Alex isn’t above shortcuts or substitutions. For “Millefeuille on the cheap,” in which he recommends using store-bought ready-made ingredients, Alex writes in the margins, “I’m afraid I have to be honest — at the time of writing this recipe I have still never made puff pastry, crème pâtissière or icing — and I’m not going to start today.” His #HACKs on things from “wine pairing for dummies (aka normal people)” to what to do with common herbs further simplify and humanize cooking.

Frenchly, with the help of food blogger Of Mozz and Men, tested out the book’s “Sexy ratatouille” recipe. The ingredients were simple, the directions were clear, and wow did it come out beautiful and absolutely delicious.

As we learned from cooking this recipe, all users of this cookbook should keep in mind is that steroid- and hormone-filled American vegetables are not the same size as organic French vegetables. For example, the US’s eggplants are the size of small footballs, and France’s are not. So when the ratatouille recipe calls for two small eggplants, even if you buy the smallest football-sized eggplants, you’ll probably only need one and it’ll need to be sliced in half to be the same size as the other vegetable slices. Our bakeware was larger than Alex’s with more tightly-packed vegetable slices; if we’d tried to match Alex’s pictured ratatouille, we probably would have used less of every vegetable.