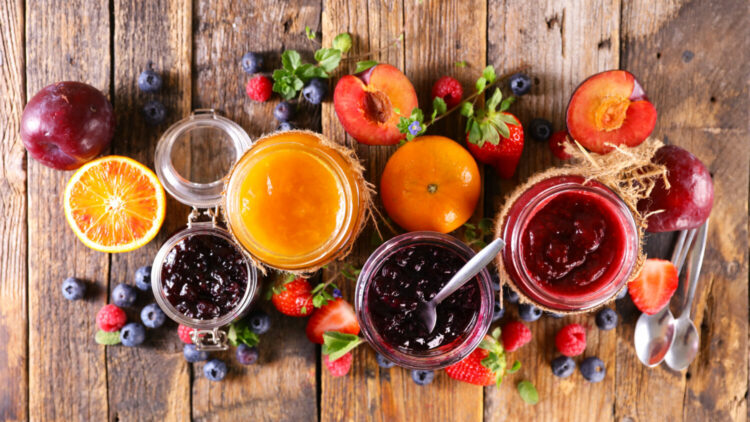 A piece of buttery toast coated with a thick layer of fruit confiture, with a cup of tea or coffee, is a true breakfast pleasure enjoyed both in France and all over the world.

“Confit,” is the root of the word, confiture, or “jam,” and comes from the French word “confire,” which means “preserved.”  Thus a confiture is considered a food (usually fruit) that is cooked slowly over a long period of time with, usually, some kind of sweetener, to preserve it. Confiture making dates back to 73 AD when Pliny the Elder, the Roman author, naturalist and philosopher, published the process in his book, Natural History, as a way to preserve precious fruits for a longer period of time. It was around the year 1000 that sugarcane was introduced in Europe through trade with the Arab world and it was found to make confiture last even longer. But confiture was originally believed to have medicinal powers (much like some syrups nowadays.) In 1555, none other than Nostradamus published a “Treatise on Make-Up and Jam” where the French astrologer and physician extolled the medicinal uses of confiture. (It’s essentially a medicinal cookbook with recipes for how to make marmalade with orange peel, cherry and quince.)

But it was in France in 1811 that Benjamin Delessert et Jean-Baptiste Quéruel first extracted sugar from beetroot and finally perfected a jam recipe. Beets, it turned out, were a much cheaper and easier way of sweetening jams, and beetroot then became a key ingredient in its production. Confiture became cheaper using beet sugar and was no longer just the food for the upper-classes and royalty. Today, confiture is a large part of the French vie quotidienne. It often accompanies a tartine, toast (whether the home-toasted or the kind that comes in a bag, ready to go) at breakfast-time or is served as a gôuter, afternoon snack, for children in the afternoon. In fact, this little activity has become so common that the French language even has a word for eating toast with a spread: tartiner.

Confiture is often made in countries with seasons and/or winter, giving everyone access to fruits that are not available year-round. French jam has had a long culinary tradition so many family recipes have had time to be improved and perfected through trial and error and just history. French customers are looking for the authentic quality of traditional cooking, French manufacturing and gourmet recipes in all their culinary indulgences. In fact, pretty much everyone knows the popular French brands, Bonne Maman, which comes in distinctive jelly jars, and St. Dalfour, both of which are available everywhere in France and, even, at most American supermarkets.

But it wouldn’t be France if there weren’t different names and types of jam. According to the Ministère de L’Économie des Finances et de la Relance, Confiture is a jam with a gelled consistency made by the help of sugars, pulp and/or puree of one or more types of fruit and water. At least 35% of the substance must be fruit and/or a puree. La gelée, on the other hand, is a jelly mixture of sugars and the juice of a fruit. Finally, la marmelade is a jam made with water, sugars and at least one citrus product. The quantity of citrus is never less than 20%. 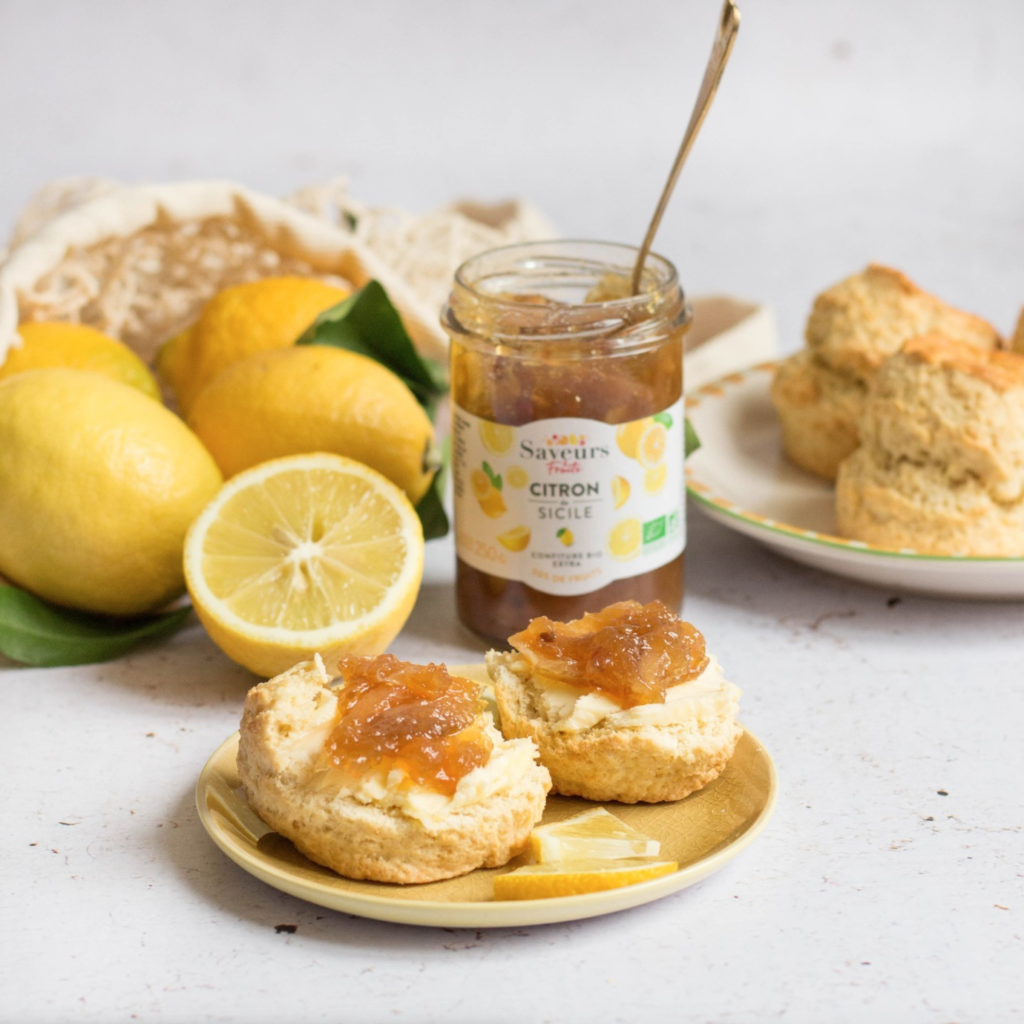 Jam is quite heavily regulated in France with its own appellation of origin and nutritious facts. “The soluble dry matter content of jams, extra jams, jellies, extra jellies, marmalades, marmalade-jellies, determined by refractometry, must be equal to or greater than 55%,” states the Ministry, ” It is set at a minimum of 75% for cream of nuts, other than chestnut cream, and a minimum of 60% for chestnut cream, cream of prunes, candied petals, and candied fruit.” Thus, the majority of the jam must be actual fruit, meaning that it can, in fact, be quite healthy.

And yet, the smooth and thick jelly texture of jam and its preservation is thanks to its high sugar content, mostly accounted for by added refined sugars. This doesn’t align with healthy eating habits and also poses a danger to those with pre-existing conditions like diabetes. A typical Bonne Maman strawberry preserve holds about 50 calories per tablespoon and is 24% sugar, 12 grams of which are purely added sugars. Some brands even read above a 50% sugar content, jam-packing their confiture with sugar and sugar substitutes for the practical reason which is that sugar makes jam keep longer. (Today sugarcane –dried or liquid–is an unrefined and healthier substitute for refined sugar, and is used instead of beet sugar most often, but still not the ideal option.) 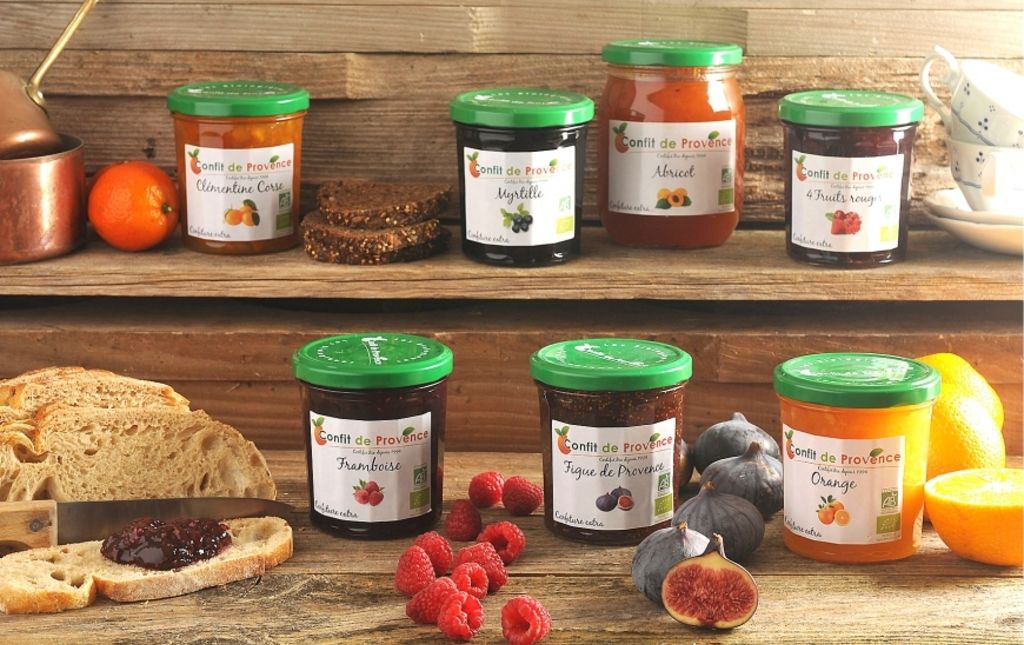 The law in France indicates that the total sugar content must be stated: “total sugar content: xx grams per 100 grams” when the carbohydrate content is not present. Otherwise the sugar content is not necessarily labeled. Excess of sugar is dangerous for those with some medical conditions, like diabetes, and is considered an inflammatory food and can also affect blood pressure, cardiovascular diseases, obesity, certain cancers such as colon, stomach, breast, uterine and pancreatic cancer. France warns its citizens through various governmental studies and public campaigns about the risks of the over-consumption of added sugars.  La Mutuelle des Métiers de la Justice et de la Sécurité reports that French people eat up to 35 kilos of sugar per year and asks them to better check labels and consume less refined sugars. Fortunately, some French brands are now offering sugar-free and no added sugar jam options to satisfy the needs of those looking to consume less sugar

While it may seem like the same thing, “Sugar-Free” and “No Added Sugar” (Sans Sucre versus Sans Sucre Ajouté) have a huge sugar-content difference. A jam without added sugar is only composed of sugars naturally present in fruits. No sugar is added during the preparation. Sugar-free jam, on the other hand, may feature other sweeteners, like  stevia, which is a natural alternative which is known to lower blood pressure and harm other essential organs like the kidneys, and or erythritol, known to cause bloating and diarrhea. The healthiest options are made with a fruit juice reduction (some brands use grape juice as their sweetener) instead of sugar, as well as honey, agar-agar, coconut sugar, and even chia seeds. Agar-agar and chia seeds, in particular, help thicken the jam without adding external sugars. These offer a healthy alternative to help gel a jam and add a little sweetness without foregoing taste or special, old world recipes. 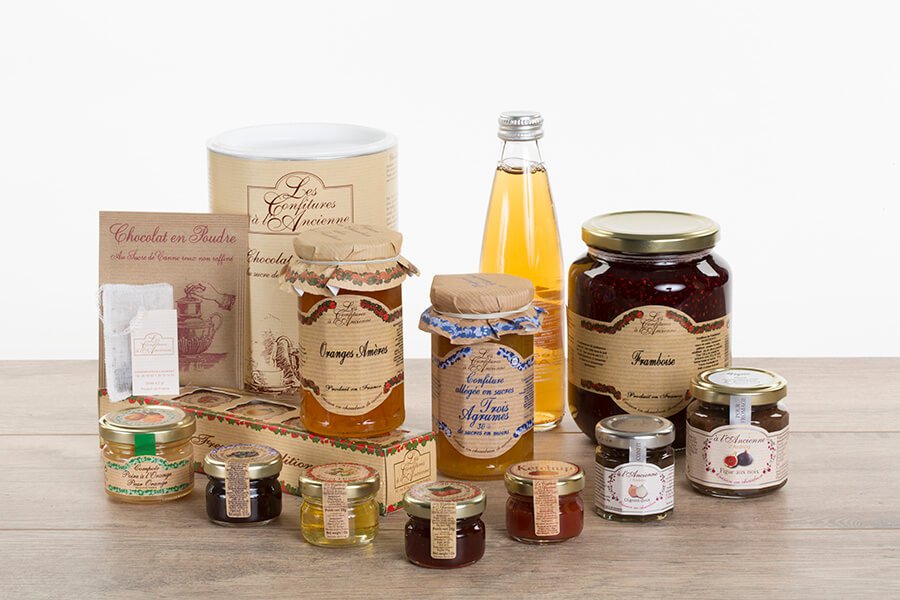 Fortunately France takes labeling quite seriously and a simple “BIO,” or organic product, label helps one choose a better and healthier jam. As for brands, Saveurs et Fruits has 100% fruit jams each at about 6€ per can, or $6.82. Confit de Provence is another small-batch producer from the South of France focused on “bio extra” production, which is an 100% fruit and organic production.  Les Confitures de Raphaël are made with 68% fruit content, entirely sugar-free and artisanal.

Stateside one can easily get their hands on Les Confitures à l’Ancienne (available on Amazon) solely made with the addition of a bit of sugarcane. Lucien Georgelin is another brand that offers the option of sugar-free jams, but be careful when ordering they do have sugary jams as well.

And just like that, this prized, sweet delight can also be a healthy one and continue to accompany your morning breakfast routine without the extra calories or astronomical sugar count. For those who’d like to learn how to make their own, if you’re in France, you can visit the home of Confitures du Climont  and take their Muséobus, which will take you around for a proper tour of jam-making and teach you all the ins-and-outs. But until then, feel free to make your own chia pudding jam with Gwyneth Paltrow’s exclusive Goop recipe.