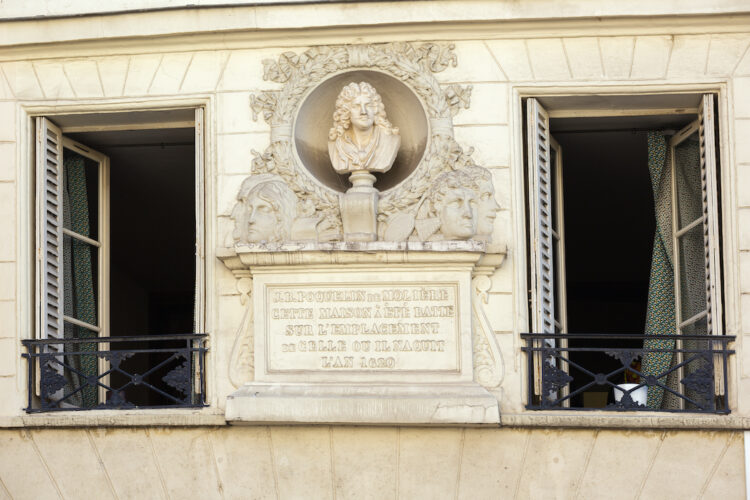 Jean-Baptiste Poquelin, better known as Molière, was born on January 15, 1622. Born into money, he spent years working as an actor in Paris, before picking up a pen to create some of the best-known plays in French history. Borrowing elements from the Italian Comedia dell’arte, Molière’s plays lovingly poke fun at the French aristocracy, and were so beloved by French society that they earned him patronage from nobility and royalty, even King Louis XIV and his brother, Philippe I, Duke of Orléans. He is often thought to have invented the “comedy of manners,” a dramatic genre which satirizes the artificial cult of courtesies constructed by the well-heeled. The playwright remains so influential, long after his death in 1673, that French is often referred to as “the language of Molière.”

Some of Molière’s more famous works include Tartuffe, about a vagrant who fakes divine wisdom in order to be taken into the home of a wealthy family; and The Misanthrope, about an aristocrat who struggles to reject the hypocrisies of his mien while still falling prey to their attractions. These and many more will be brought back to the stage this year as France celebrates the playwright’s 400th birthday.

At the center of this project is the Comédie-Française, one of the only state theaters in France, and the oldest active theater company in the world, dating all the way back to 1680. Since 1799, the troupe has been housed in the Salle Richelieu, which was originally built in 1790 to be an opera house, and is located in Paris’s central 1st arrondissement.

For this season the Comédie-Française will showcase sixteen plays by and about the wordsmith through July 25, 2022. Seven will take place at the Salle Richelieu: Tartuffe; The Misanthrope; The Imaginary Invalid; The Miser; Scapin the Schemer; The Bourgeois Gentleman; and Jean-Baptiste, Madeleine, Armande, and the Others… At the Théâtre du Vieux-Colombier, there will be three: Don Juan; The Affected Young Ladies; and Le crépuscule des singes. And at the Studio-Théâtre, six more: D’où rayonne la nuit; Le silence de Molière; On ne sera jamais Alceste; Molière matériau(x); The Forced Marriage; and Ex-traits de femmes.

Some productions will even be available to watch in cinemas through a collaboration between the Comédie-Française and Pathé Live. TV, radio, and podcasts will all get a slice of the action as well.

Outside of Paris, dozens of other French cities, as well as universities around the world, are turning out to recognize their favorite French playwright. The Molière 2022 project will keep up-to-date tabs on where and when these productions will take place. Pézenas & Montpellier will host the festival, Scènes de médecine chez Molière. Fortune et modèles européens, in May. Molière sans frontières will be hosted at the Théâtre Montansier in June. And Molière Toulouse will be host to a variety of events from through June. These are just a few of the many events going on, so check the website to see if there are any productions, discussions, or conferences happening near you. And, if there aren’t, you can always spend an enjoyable evening watching this 2007 French film about the playwright and how he came to be the one and only Molière.