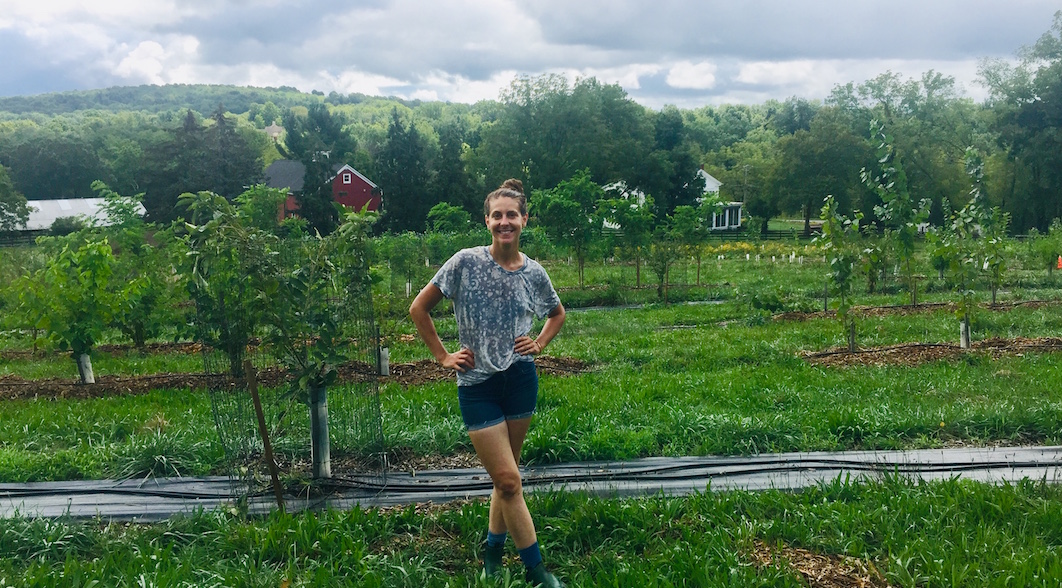 It takes a quick stride to follow Alix Daguin through her farm, All One One All (AOOA). Duck and sheep pens here, vegetable and tree plans there, fences to climb over: she knows her land inside out. And for good reason: the farmer designed it from A to Z. “I used to be an architect!” she says in front of a plan she drew of the 14-acre farm, located outside the town of Goshen, just over an hour north of New York City.

If someone had told Alix Daguin two years ago that she would be running an Upstate New York farm, she certainly wouldn’t have believed it. The daughter of “foie gras queen” Ariane Daguin, founder of D’Artagnan, and granddaughter of Michelin-starred chef André Daguin, she was reluctant at a young age to pursue a career in the food business. After graduating from Cornell’s School of Hospitality, she decided in 2011 to go to California for a Master’s degree in architecture. “I knew I was going to get back into food sooner or later because of my studies at Cornell. But I certainly couldn’t magically become an architect later,” she says, over beet hummus and homemade gazpacho.

No longer feeling “fulfilled” after five years in an architectural firm in San Francisco, she decided to take a “break.” She went to Spain to climb. After a shoulder injury, she went cycling in Latin America. Back in New York, she had to answer her mother’s question: “What are you going to do with your life?” For a while, the two women considered setting up a “Gastro-dome,” a large space at the crossroads of “market, school, farm and amusement park.” But they decided that opening a farm would be more realistic. So in the winter of 2020, Alix Daguin set her sights on the site where AOOA is now and where she lives, a former dog center whose owner also had horses. “When we saw it, we said to ourselves: OK, let’s go. The place was small enough to be easily managed. There was also an infrastructure in place to start the work right away.”

All One One All is not like other farms in the region: it specializes in agroforestry, a soil protection technique where trees and crops are combined with livestock on the same plot. The result: considerable benefits in terms of soil fertilization, optimization of water use, diversification of production, and pollination in particular. “There are many agricultural models, but this one creates bio-diverse and regenerative landscapes that benefit the planet and the population,” explains Daguin.

At AOOA, rows of fruit trees intermingle with fodder trees (for animal feed) on the same “block” of land. The wood is also used to grow mushrooms and create natural habitats for insects and birds. A total of 2,000 trees were planted to complete this ambitious project. All the elements of the ecosystem help and enrich each other,” says Alix Daguin. Agroforestry is not yet well-known among the general public, but the term has the potential to become as popular as “permaculture.”

Her interest in alternative forms of agriculture is not new. She wrote a thesis on pig farming in Central Park and the need to “bring productive landscapes back to the cities because they have moved away from them, causing a disconnect with the population.” In addition, her uncle, chef Arnaud Daguin, is the spokesperson in France for the movement Pour une agriculture du vivant, which promotes soil-friendly agriculture.

A non-profit organization, the D’Artagnan Foundation, has been created to raise funds and apply for grants. Other revenue streams are also in place to support the small operation of two full-time employees, largely funded by D’Artagnan. In June, AOOA opened a “farm stand” in its main building, which sells a nice array of homemade products: teas, flower bouquets, popular popsicles (try the fudge one), salads, and fresh bread. The farm also hosts a variety of workshops (beekeeping, tree identification…) and will open a restaurant in the 1805 barn as soon as the necessary permits are approved by the city. “Sometimes the days are hard. I get impatient because things aren’t moving forward and there’s a lot to do,” says Daguin. “And then I look at this new farm stand, for example, and I think, ‘Six months ago this didn’t exist. We were still scratching the ceiling!'”