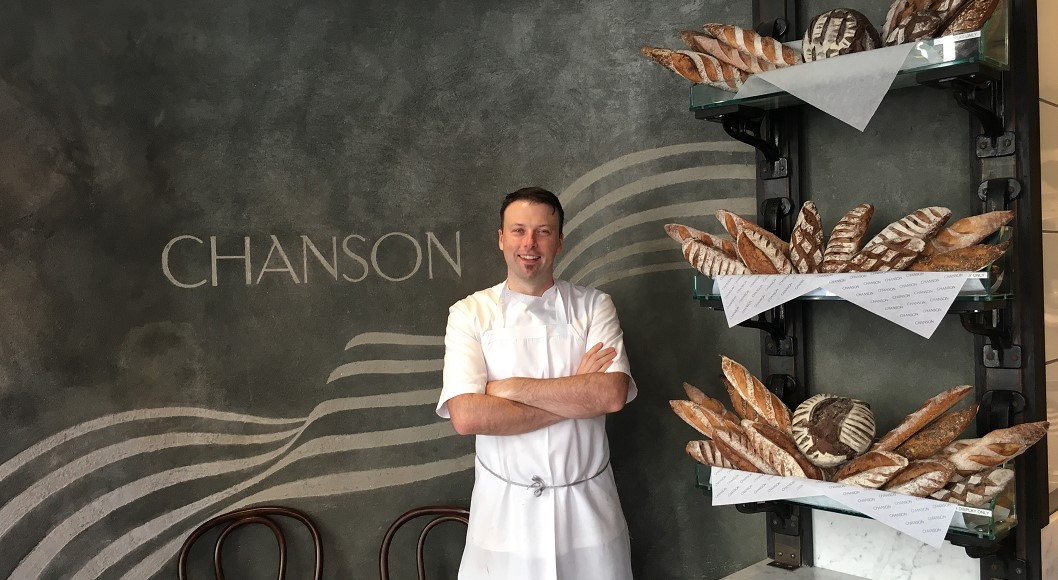 Chanson Bakery: French sweets and a dessert bar in NYC

From the outside, Chanson looks just like a normal pâtisserie: a counter selling small sugary sweets, a few tables, baguettes and other baked breads lining the walls. But the real gem of this new Flatiron address is found underground, where there’s a late-night dessert bar. An intimate space, only 16 lucky people at a time can appreciate the sweet and savory desserts, like truffle popcorn and beet-pomegranate sorbet, accompanied by unique cocktails. “It’s a totally new concept,” said Rory MacDonald, the chef behind Chanson.

Born in London, this young pastry chef has known he wanted to make pastries ever since he opened a magazine and read an article about pastries some 15 years ago. Since then, he’s worked in Michelin-starred establishments in England and Spain (Arzak in San Sebastián, El Cenador de Salvador in Madrid, and Pearl in London). In 2009, he lead the opening of celebrity chef Gordon Ramsay’s restaurant, Gordon Ramsay at the London, in the London Hotel in New York City. In 2012, he was Executive Pastry Chef USA with the Hakkasan Group, a group who owns high quality restaurants and nightclubs. After having worked with many starred chefs, MacDonald is, for the first time, alone at the helm. “With Hakkasan, I traveled all the time. It’s good, but it’s a lot. Now, I’m here at Chanson day and night, but at least I get to go back home,” explains MacDonald, who is the father of a 2-year-old girl.

Besides baguette, at Chanson, you’ll find six other types of bread, pain au chocolat, macarons, croissants, and even kouign-amann, the Breton speciality. Everything is prepared in an open kitchen so that clients can watch the process of their food being made. “For the croissant, I want you to think that you’re in Paris,” proclaimed MacDonald. According to him, this love of pâtisserie française really blossomed during a four-year apprenticeship in a Michelin-starred British hotel.

Chanson also has room for patrons to enjoy some larger French and English dishes at an afternoon tea served daily from 3-6pm. Sandwiches, macarons, bonbons, caramels, and fancy cakes are available, listed on the menu beside a large selection of teas from all around the world. “It reminds me of home,” adds a MacDonald.