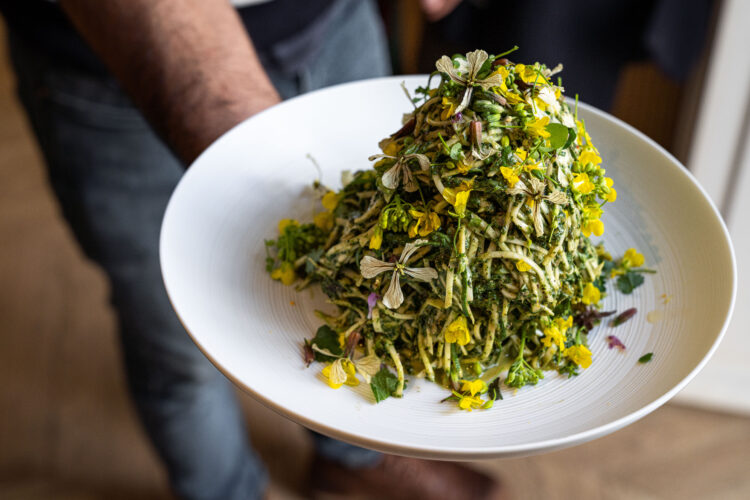 In troubling times, we often turn to a favorite and reliable comfort food. While chocolate, the smooth semi-sweet food-of-the-gods, tops the list of edibles that fill me with a sense of well-being, you might be surprised to learn that a close runner-up is a dish derived from an unseemly root: céleri rémoulade.

Little known in the US, céleri rémoulade can be found on the menus of bistros and brasseries all over France. And in Paris, it’s practically de rigeur: from the bustling Bouillon Chartier, to the pricier Brasserie Lipp, or the one-time Picasso and Hemingway haunt, La Closerie des Lilas, you will find a chef’s take on the classic at nearly every corner café or brasserie.

Besides its transcendent taste, part of the appeal to chefs, and diners alike, is its pure simplicity. No cooking and only four ingredients grace the basic recipe: celery root (julienned), sharp mustard, mayonnaise, lemon juice, salt, pepper, and herbs. According to the website, The Devil Wears Salad, “remoulade originated from France in the mid-19th century. It comes from the word remolat, which is a French dialect that means ‘horseradish’.” And, it should be noted, céleri rémoulade is as different from Louisiana remoulade as French is to Creole.

So you can imagine my surprise when, a few weeks ago, I received the press release for the Céleri Rémoulade Coupe du Monde (World Cup). Yessss! The unsung hero of French cuisine finally gets its due!  Cult cookbook author François Mallet, and Ezéchiel Zérah – editor-in-chief of the online magazine, Z par Zenchef, realized that this simple, healthy, reliable pillar of French gastronomy deserved to be center stage. On the Monday before the first day of spring, with a spring in my step, I headed the few blocks from my home to the kitchens of ZenChef in eager anticipation of watching eight chef finalists compete for the lauded Céleri Rémoulade World Cup! 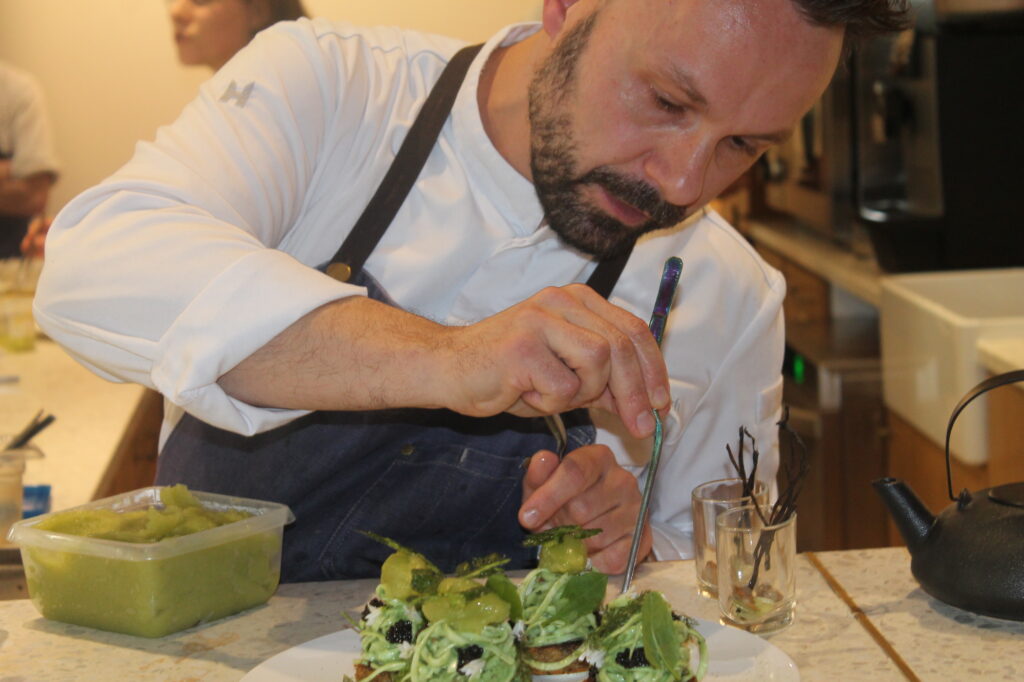 Beginning in my teens, when I came to France on a budget to visit friends and family, my ideal meals were those eaten at home or chez les amis, and were often comprised of mouth-watering dishes we’d pick up at a neighborhood traiteur. Said to be the precursor to restaurants, these shops offer a cornucopia of prepared (restaurant-worthy) dishes, cheeses, cold cuts and salads. Céleri rémoulade–the tangy julienned celery root salad in a mustard mayonnaise sauce–was, for me, the obligatory lynchpin to these delicious ad-hock meals in Paris.

My earliest, and certainly boldest, meal memory I will always associate with the dish was a lunch one summer with my brother when we were in our teens. We were dining at Le Trumilou, one of the great classic brass rail, zinc bar bistros. I was enjoying my céleri rémoulade, and gazing at the Ile Saint Louis across the Seine. I suddenly noticed that the striking showbizzy couple at the window banquette wasn’t fussing over a child, but over their pet chimpanzee who was clad in a complete blue jean outfit!  The moment was as startling and unexpected as my gustatory aha moment that would trigger a life-long appreciation for the rough Celeriac-based crudité salad.

Over the years, while I’ve had few opportunities to savor the dish in the US, it has remained a foundation of my personal food pyramid, and I am always quick to sing its praises. One such time was at the regional kick-off meeting of the James Beard Foundation’s four-day workshop to innovate solutions for local food issues by mindful chefs, including celebrity chefs like Michel Nischan and Dominique Crenn. We went around the room, and each person was asked to name their favorite food. When it was my turn, I blurted out, “céleri rémoulade.” A murmur of approval and a nodding of heads was followed by a discussion about the merits of celery root (which tastes closer to turnip than celery stalk.)

Once at the World Cup, I was greeted by the heart-warming sight of chefs preparing their own innovative versions of céleri rémoulade, amid a buzz of celery camaraderie and good spirit. Chef Manon Bonely of the Commissary at Blackmarket was assembling her Celeri Au Kimchi Sans Chi-Chi et Zero Gachis (“no waste, bling-free kimchi celery”). She explained that in order to avoid waste during the confinement, her commissary repurposed vegetables into kimchi. I met Chef Theophile Bourgeois, who aerobically fermented, then dehydrated, and then rehydrated his julienned celery root in house-made celery wine. Restaurant Mumi Chef Romain Le Cordroch’s Surf n’ Turf Celeri Remoulade with Breton Notes is an homage to his mother’s native Brittany. He explained that its green color comes from algae mustard, the algae for which he harvested himself. It’s sprinkled with eco-friendly Rova caviar, shaped into small nest-like balls and topped with a dollop of housemade celery sorbet and aloe vera (not the sunburn gel, an edible healthy ingredient). The grand prize went, in the end, to Chef Sugio Yamaguchi for his French-Asian-inspired take on this classic, which included watercress, garlic, chives, sorrel leaves and yarrow. 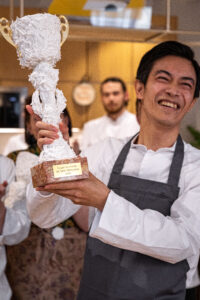 A few hours of celebrating celery root salad triggered memories of trips to France, and many moments spent reconnecting with friends and family over meals. If you want to take a trip to Paris with your tastebuds or share an authentic taste of France with friends, here’s a straightforward céleri rémoulade recipe you’ll enjoy. Luckily, you don’t have to be in France to enjoy it. You can stick to the basics, or get creative. And when people really get it, you’ll see that celery smile spread across their faces. We could all use more smiles these days, wherever they come from.