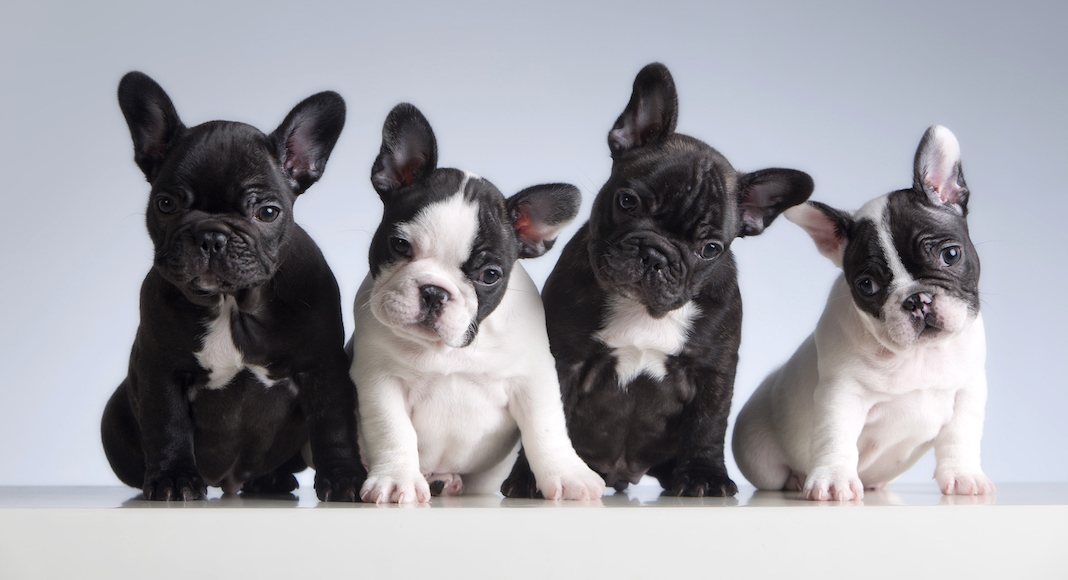 The French Bulldog is one of the oldest heritage breeds in the world, and in recent years, they have become the dog of choice for the on-trend and relatably cosmopolitan pet owner. Their lasting popularity is undeniable, but there is one question that still looms: are French Bulldogs really French?

For answers, we turn to Jim Grebe, Historian and Archivist of the French Bull Dog Club of America, the first breed club in the world dedicated to Frenchies.

“In addition to the regular bulldogs there had always been smaller or toy bulldogs weighing under 20 lbs and these were very popular in the lace-making area of Nottingham in England,” explained Grebe. “The lace-makers’ specialized work became mechanized in the 19th century, and many workers migrated to Chantilly and other cities in France and took along their little bulldogs. Over the years other breeds, probably terriers, were used in the breeding and this resulted in the French bulldog with a less sour expression, higher in leg and, in general, less ‘bully.’” But the most distinguishing feature? The “bat ears” Frenchies are known for, though, “only later did the American breeders set ‘bat ears’ as the standard rather than ‘rose ears’ as seen on bulldogs.”

They gained swift popularity in Paris, where they were known as Bouledogues Français, “because they were well-suited to urban life—small, require little grooming and most have engaging personalities and are friendly to strangers.” It’s this last trait that Grebe thinks might have accounted for their popularity amongst a certain section of the Parisian population: streetwalkers. The belles de nuit of Paris’s Belle Époque took instantly to the little guys, though they were also common companions of working class Parisians, “such as butchers, cafe owners and dealers in the rag trade.”

Frenchies soon became trendy amongst Parisian high society, however, who probably thought their association with the city’s underbelly was fashionably risqué. They became a subject of great artistic interest, most famously thanks to Henri de Toulouse-Lautrec, who did many drawings of ‘Bouboule,’ the pet of Madame Palmyre, proprietress of the restaurant La Souris. Toulouse-Lautrec was known for his depictions of Paris’s nightlife (especially its “urban underclass”), so it’s no surprise that he encountered a few of these fellows along the way.

Sculptors like Paul Edouard Dreux, Richard Fath, E.M. Samson, Albert Vidal Alexandre Boudarel, André-Vincent Becquerel, and Auguste Vimar were fascinated with the unique shape of French Bulldogs. The Sèvres factory made porcelain and crystal representations of them. And even the House of Cartier itself created some truly one-of-a-kind jewel-decked French Bulldogs, like this one carved from quartz, with diamond eyes and a pear collar.

In fact, there has been so much art centered around French Bulldogs over the past century and a half, that last year Revodana Publishing released A Most Celebrated Breed: The Art of the French Bulldog, written by Frenchie expert and enthusiast, Gary Bachman. It is the definitive collection of Frenchie art, covering everything “from pricey antiques to kitschy postcards.”

According to the FBDCA’s website, these dogs made their way across the ocean when “well-to-do Americans on the Grand Tour of Europe saw them [in Paris] and began bringing them to the US.” The French Bull Dog Club itself was founded in the year 1897, and for the next two decades Frenchies were beloved among East Coast elites, up until World War I slowed down the breeding of Frenchies. The French Bulldog as Toulouse-Lautrec knew it was registered and remains, for the most part, unchanged.

From lapdogs in Chantilly to Parisian companions, as muses of French artists and ouvriers alike, the Frenchie has certainly earned its name.