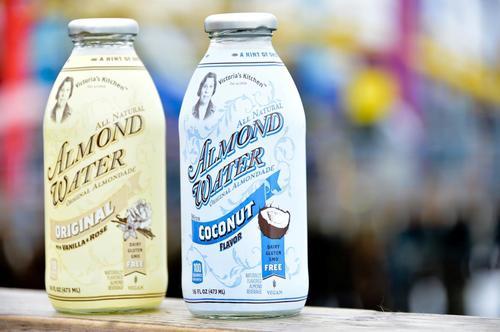 If you’ve ever joined a French family for their afternoon goûter you’ve probably seen them add colorful, sweet syrups to sparkling or still water or milk. In France, kids and adults alike indulge in this tradition that, for one reason or another, has yet to catch on in mainstream America. Now, David Meniane, a Frenchman living in California, is bringing one of the more classic syrup flavors to the West Coast in the form of a pre-mixed, individually bottled drink called almond water.

At the heart of the beverage is sirop d’orgeat, and for French people and US connoisseurs the taste is likely to spark nostalgia: amaretto with hints of vanilla and rose. The recipe is authentic, straight from the kitchen of the creator’s 85-year-old grandmother Victoria Meniane, who lends her portrait and her name to the brand.

“I’ve been making sirop d’orgeat since I came to the United States because it’s what I’ve been drinking ever since I was a little boy,” explains the 32-year-old entrepreneur who first launched this business in 2012, “I offered it to my American friends and they thought it was very good. It’s a flavor not many people here had tried. So I decided to go for it, playing up the vintage French angle.”

The slightly sweet almond water is low-calorie with no added colors or preservatives, perfect for the health-food stores that stock it in California, Oregon and Washington State. The business is expanding, too, with the beverage soon to hit shelves in 50 Target stores on the West Coast. “We’ve grown 100% from one year to the next,” says Meniane, who used his savings to start the business,”We’re talking with investors to try and expand even more.”

In 2013, another version of the beverage came out with added coconut water. It was a huge success. “It now represents half of our sales,” says Meniane, who updates his grandmother daily on the brand’s progress. Victoria’s Kitchen will also come out with a ginger lemonade next year.