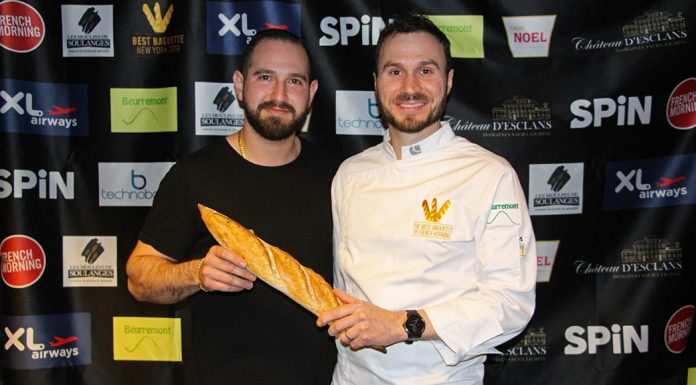 It’s a piece of news that will delight lovers of crispy croissants and good baguettes. Yann Ledoux, former head baker of Maison Kayser in New York, will open his own store in Stuyvesant Town, just north of the East Village. “I signed my lease January 21. The room was in good condition so only a few retouches remain to be done before an opening scheduled by Easter (April 4).”

This 36-year-old from Normandy joined Maison Kayser in 2006 as a baker, before climbing little by little the ladder between Paris, Dubai, and then New York, where he was in charge of product development and management of bakers since 2012. Known for his savoir faire, Yann Ledoux won several prizes with Maison Kayser, like the best pain au chocolat in 2018, and best baguette in 2019. “We grew very fast with several boutique openings, but the cost grew just as fast and it wasn’t tenable anymore,” Ledoux confides as an explanation for why he quit Maison Kayser even before the start of the pandemic. “There was already internal restructuring before Covid arrived. My job would have been eliminated no matter what happened.” After closing all of their bakeries in March, Maison Kayser USA declared bankruptcy last September. They have since been bought out by Aurify Brands, which will transform their boutiques into Le Pain Quotidien locations, their former rival.

“I did a lot of consulting after I left, and I also had my first child in April. It was a good moment to take some time for me and my family,” explains Ledoux, whose idea to launch has been maturing since last August, before finding the perfect storefront at the end of the year. “I fell in love with the Stuyvesant Town community, where I moved in December. It has a real neighborhood vibe, everyone knows their neighbors,” he comments. “I found a location at 1st Ave and 16th St, at a former Paris Baguette that closed. I told myself that it was the perfect place to open a bakery for this community in need of good bread.”

Ledoux promises the 20,000 inhabitants of StuyTown, “good, local bakery products like you would find in France, at accessible prices.” Concretely, the baker offers baguettes at less than $3, viennoiseries, and pastries, particularly those that sit well at room temperature like apple tart, Gâteau Basque, or Kouign-amann, because experience has taught him that New Yorkers are not used to fragile French pastries that are difficult to transport. “I decided to adapt to the needs of New Yorkers who can sometimes spend 30 to 45 minutes in transit.” Ledoux will also prepare products accessible to children like chouquettes, madeleines, cookies, and Pain au Lait, because “nothing makes a baker happier than seeing  a smile on the face of a child who appreciates their snack.”

The baker is currently in the process of hiring five to six people to help him, “talented people who want to work with me,” and wants his location to be open from 10-12 each day. “At Kayser, the production was massive. Here, I want to concentrate on a single bakery. My goal is to take time to work on good products made artisanally, notably the tourage” (editor’s note: the preparation of puff pastry). The name of the shop, and its website, will be revealed in the coming days. Long term, the ex-chef boulanger of Kayser hopes to, “earn from scratch the best croissant prize, and the best baguette in the city.”