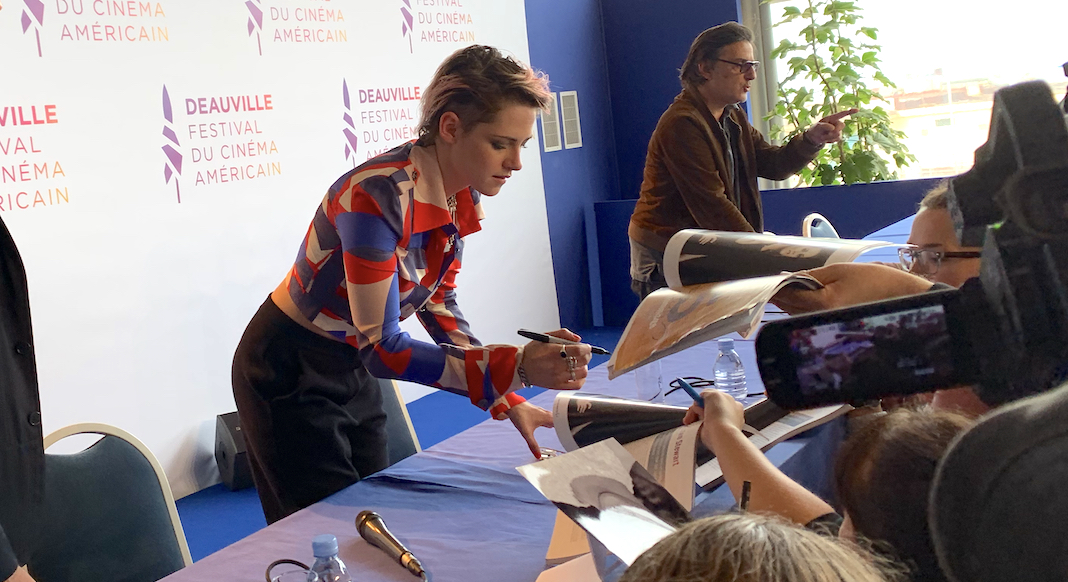 You will hear in the new thriller Seberg that the American actress Jean Seberg, who starred in the legendary New Wave film Breathless, by Jean-Luc Godard, was “huge in France.”

Life has a funny way of connecting the dots. Indeed, you could also hear at its French premiere at the 45th Deauville American Film Festival in France that Kristen Stewart, who plays Seberg’s character in the movie, is herself also “huge in France.”

It was at this year’s festival that Stewart received the prestigious Deauville Talent Award after a massive standing-ovation and a laudatory speech from French director Olivier Assayas. The Frenchman has worked with her twice in her career, notably on the production of Clouds Of Sils Maria in 2015. Her work in this film earned her the honor of becoming the first American actress to ever win a César Award, the French equivalent to an Oscar. So why is this? How did a 29-year-old American actress win over French audiences? Why does France love Kristen Stewart so much?

First of all, there is only one Kristen Stewart. She is so unique — and just oozes cool — that anyone from anywhere in the world could love her as much as the French do. She is stunning, both in films and as a model and brand ambassador in the fashion industry. She comes off as so genuine and unvarnished in front of the camera that her exceptional talent is no doubt. And the movies she plays in are usually great successes, like Panic Room, Into the Wild or Certain Women, which are only three examples of her already-long filmography in her 20-year career. In short, she has a unique, likable presence on set and in photoshoots, as well as in paparazzi-stolen pictures, that only spiteful haters could deny.

However, not all the Hollywood A-list celebrities with similar qualities have this very special tie that Stewart maintains with the French audience. What sets this American apart is that the French know that she herself likes France, and its cinema, a lot. That helps the reciprocal to be true. “I love France,” she said at the Seberg press conference during the Deauville festival. “You know, there is a difference between cinema in France and in the United States. The United States mainly feeds a movie industry based on money, fame and power while movies are considered more as a proper culture and art in France.” Stewart personally identifies with the second conception better.

In other words, she might have kind of a “French” way of approaching cinema that French audiences perceive and appreciate. “She always has the courage to choose freedom over anything in life,” lauded Assayas in introductory speech for Stewart to receive her award, on the Friday of the Deauville festival. “In her career, she embodies liberty through her daring choices in independent cinema. She always puts the story first despite its potential non-glamorous and non- lucrative dimensions in favor of its deeper meaning and of her honest connection to it.” The resulting truth, singularity, and strength she presents seduce the French.

Finally, she has enmeshed her career with France in so many ways. Her collaboration with the iconic French fashion house Chanel in the Gabrielle perfume campaign was huge, plastering her face across billboards and French magazine spreads. In this role, Stewart-as-Gabrielle glowed with qualities not only associated with the French designer, but also with Stewart herself: passionate, rebellious and free. She also starred in the film Personal Shopper, also directed by Assayas, that was shot in France. She starred in Clouds of Sils Maria opposite the beautiful French actress Juliette Binoche, who persists as a symbol of France worldwide. This accumulation of French elements and connections creates a special bond between the American actress and France.

There would be no point in stubbornly “Frenchizing” Stewart here, who clearly represents the veritable made-in-L.A. star. Nevertheless, she definitely gives off French vibes — in how she carries herself, in cinema, in style — that France is so in tune with.

And that is why she finally got her cabin sign at the Promenade des Planches in Normandy, an equivalent to a star on the Hollywood Walk of Fame in California. It’s the ultimate symbol of her rich bicultural artistic tendencies sculpted by two different yet amazing aesthetics of cinema.