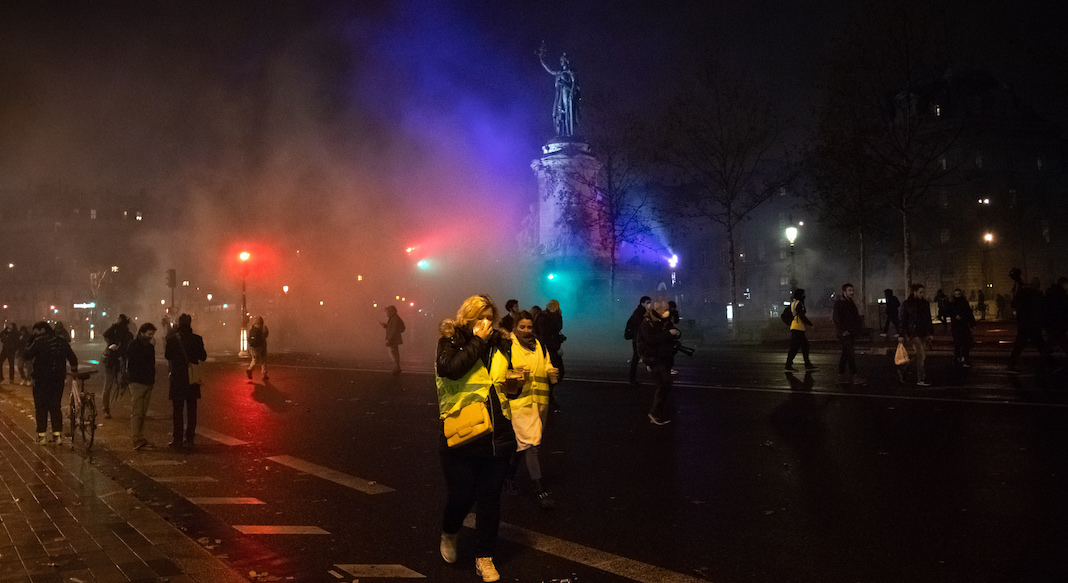 What Happened During this Weekend’s Gilets Jaunes Protests

To prepare for the fourth weekend of “gilets jaunes” (yellow jacket) protests, security forces numbering at 89,000 were deployed around the country. In Paris, more than 8,000 police officers, and a few armored vehicles, began patrolling the streets before the sun rose on December 8.

An estimated 8,000 protestors took to the streets of the capital, which had done its best to prepare for chaos. The Louvre, Eiffel Tower, opera, and other museums had closed as a security measure. The light displays at Galeries Lafayette and Printemps were turned off. Banks, shops, bodegas, and restaurants boarded up their storefronts on Friday to keep looters out.

Police used tear gas and water cannons to disperse protestors, some of whom were setting fires in the streets with the plywood used to board-up stores for fuel. Groups of gilets jaunes blocked the péripherique around Paris, just west of the city, until police intervened to disperse them. The day’s protests were overall less violent than the previous weekend’s.

As reported by Forbes, by Saturday evening, the Paris police had made more than 700 “preventative arrests” of those “participation in a gathering intending to prepare violent acts against people or the destruction of property,” with 1,000 people stopped for questioning, and 5,000 cars checked nationwide, according to the Interior Ministry. All across the country, about 31,000 people participated in the protests, which led to at least 135 injuries.

Another less reported gathering in Paris on Saturday gathered even more supporters than the gilets jaunes: a March for the Climate. The peaceful, nationwide demonstration drew 25,000 people to Paris alone.

Though the gilets jaunes began as an anti-tax protest, it has truly become an anti-government movement: this past weekend saw gilets jaunes protests in Belgium and the Netherlands as well. It’s possible that the gilets jaunes movement has been overtaken by nationalists and anarchists, perhaps only present to partake in some gratuitous destruction and violence, as the BBC questions in their own report above, but it’s difficult to say definitively because the movement has no structure, leadership, or official spokespeople. Not all gilets jaunes are happy with how the movement has become violent or associated with violence. A reporter from Le Monde tweeted an image captioned, “Young people in #giletsjaunes [#yellowvests] lay some scooters on the ground, and set them on fire, while disgruntled #giletsjaunes who had tried to stop them from burning a car watched. ‘I don’t know why they have a gilet, they’re not gilets jaunes,’ says one gilets jaunes from Vitry.”

Gilets jaunes marching through the Marais singing the national anthem & chanting" "If you're gilet jaune and pacifist clap your hands".
An elderly lady peered out of the door of a church jumble sale, "It's ok, they're not the bad ones," she said. pic.twitter.com/Mh6twE5C9T

President Donald Trump added his two-cents on Twitter in the early hours of the morning in the United States, after the protests had been going on for a while in France, using the gilets jaunes again to promote his political agenda. France’s own president, Emmanuel Macron, who many of the protestors are targeting their anger at, will be speaking in a televised address on Monday evening to address the nation.

The Paris Agreement isn’t working out so well for Paris. Protests and riots all over France. People do not want to pay large sums of money, much to third world countries (that are questionably run), in order to maybe protect the environment. Chanting “We Want Trump!” Love France.