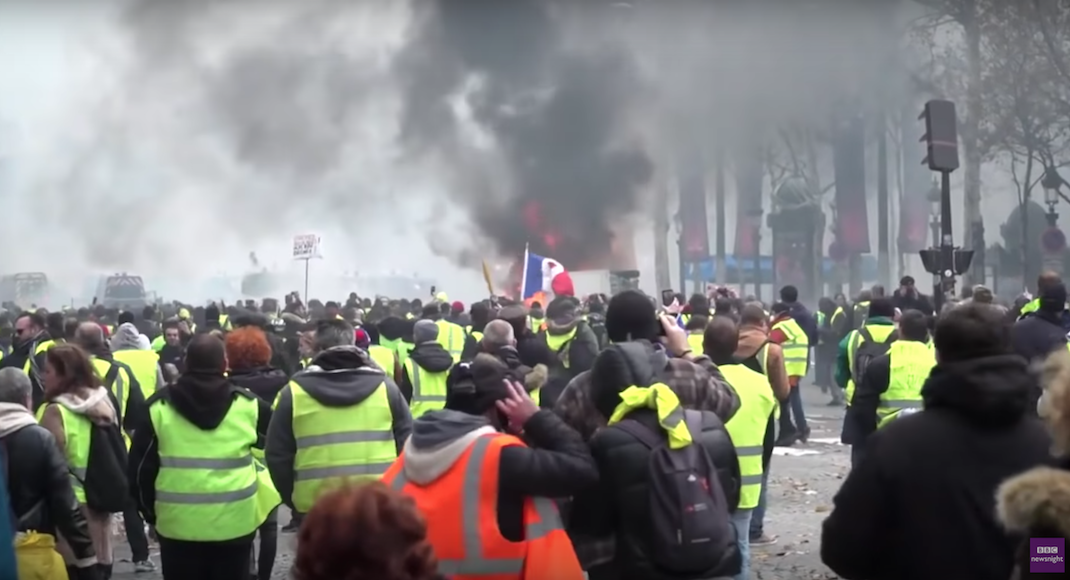 What was once an established symbol, a cry for help, has become something far more intense in France.

The yellow jackets worn by motorists in distress are being used by protestors without a leader and without any clear goal. These gilets jaunes, as both the the jackets and the protestors are called, began protesting three weeks ago after French president Emmanuel Macron announced tax hikes on diesel as part of his new green initiative to ween France off of its oil and nuclear dependency.

But what began as a protest against fuel taxes evolved into a new conversation on rural French people versus urban French people, which has even more recently evolved into a new beast with only one clear principle: that the French are not happy with Macron. And they have been not only vocal, but physical about it, torching cars and destroying store fronts in Paris and beyond. Paris and France as a whole are in a gridlock, with protestor and police clashes causing hundreds of injuries and even a few deaths.

Macron has previously refused to back down, claiming that those who demanded greener policies are now refusing to suffer the consequences, but on Tuesday, December 4, the French government announced that it was suspending the planned increase in fuel tax for six months.

The government made this decision after coming face to face with the violence this weekend in the capital. On Saturday and Sunday alone, more than 130 people were injured and over 400 arrested in Paris, with the worst of the damage happening in the form of looting on the Champs-Elysées and vandalism of the Arc de Triomphe.

“Setting the course and holding it is a necessity to govern France. But no tax deserves to jeopardize the unity of the nation,” the Prime Minister Edouard Philippe said in a televised address.

The fuel hikes, scheduled for January 1, will now begin in the summer. It’s unclear what will be done in the extended time period before the tax hikes begin, but one can only hope that Macron has a plan to appease France’s rural working-class citizens.