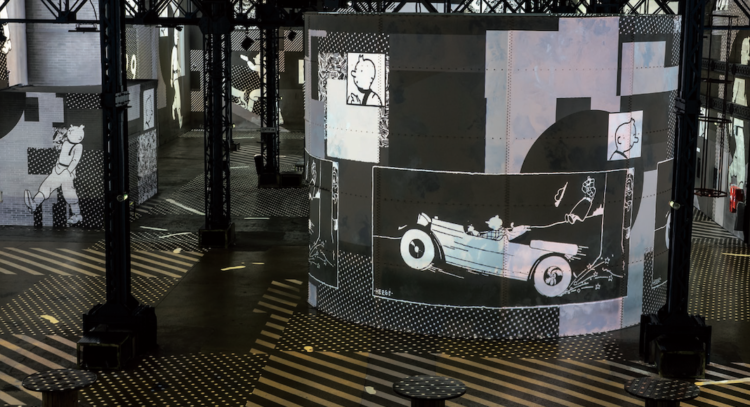 Tintin is coming to Paris.

One of the most popular European comics of the 20th century, The Adventures of Tintin,  is a French-language bande desinée series from the Belgian cartoonist, Georges Remi, better known by his nom de plume, Hergé. Hergé pioneered the ligne claire style of drawing, known for its clear, strong lines, which was inspired by both American cartoons of the early 20th century, as well as traditional Japanese woodblocks. Solid colors, realistic backgrounds, no cross hatching, and minimal shading and contrast give the cartoons a distinctive flat appearance.

The comics follow Tintin, a young Belgian reporter, as he takes on dangerous story assignments that lead him on daring adventures. His optimistic and well-intentioned personality pits him as a symbol of idealism in an otherwise corrupt and troubled world. Tintin’s adventures take him from China to the Congo to the Soviet Union, as well as a handful of fictional locations sprouted from Hergé’s imagination, with stories inspired by real life events of the 20th century. These stories have been adapted for radio, television, theater and film, translated in over 70 languages, and even memorialized in a Belgian museum dedicated to the works of Hergé. 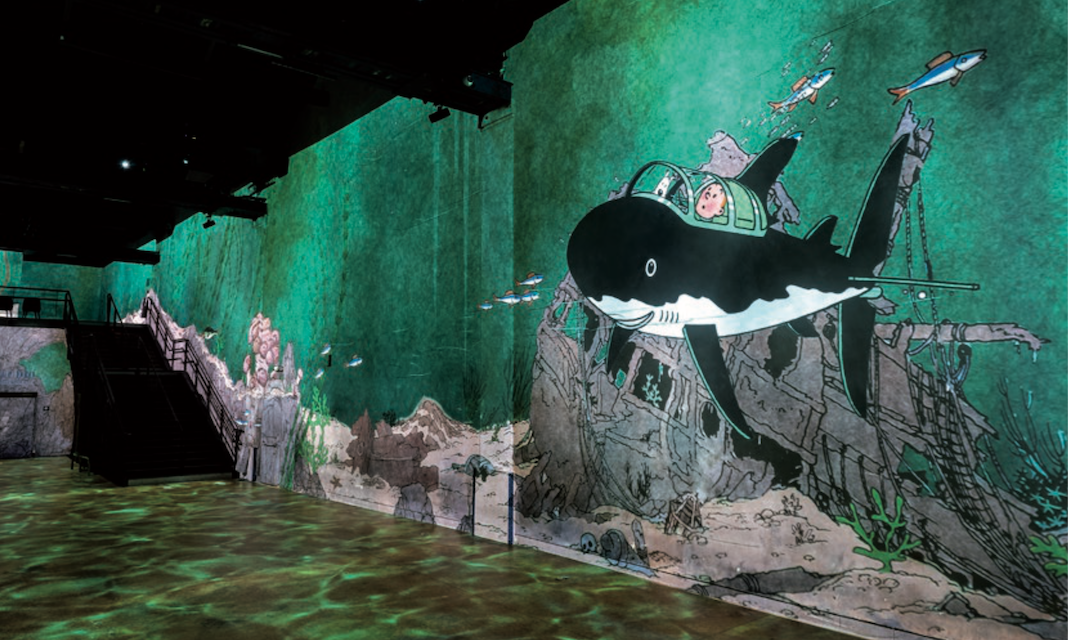 Tintin, like many classics from a pre-woke era, has faced scrutiny in recent years as fond memories have been confronted by the actual subject material. Hergé grew up as a film buff and Boy Scout in Belgium, still a child during the German occupation of World War I. His politics were shaped by his upbringing, and can be clearly seen in his early works. Tintin in the Land of the Soviets (1929) is blatant anti-communist propaganda, and was followed up in 1930 by the even more controversial, Tintin in the Congo. It would be euphemistic to say that the Congo, a Belgian colony at the time, was depicted through a colonial and paternalistic lens true to the at-the-time contemporary worldview–the comic is bluntly racist on a level that would make even Tucker Carlson sweat. But though these more controversial comics are being quietly disappeared from the canon, fans of the series, on a whole, appear willing to reconcile with Tintin’s complex, and yet enduring, significance.

Moulinsart, the exclusive worldwide holder of the exploitation and representation rights of Hergé’s work, has joined with Culturespaces to present Tintin, The Immersive Adventure at the Atelier des Lumières in Paris, which will run from October 21-November 20, 2022. The digital art space, which has been operating since 2018, has been producing immersive experiences that primarily showcase art from the late 19th century. They opened in 2018 with an exhibition devoted to Gustav Klimt and the Vienna Secession (an offshoot of Art Nouveau), and followed this up in 2019 with an immersive Van Gogh exhibition (one of the first of what became an out-of-control craze for the Dutch painter). They are also currently headlining their offerings with Cezanne, The Lights of Provence, an ode to the home region of the French Impressionist painter, which will overlap with the Tintin exhibition. (When you visit the Atelier, the exhibitions run on a timed loop one after another, so you can watch up to three different installations in a row.) 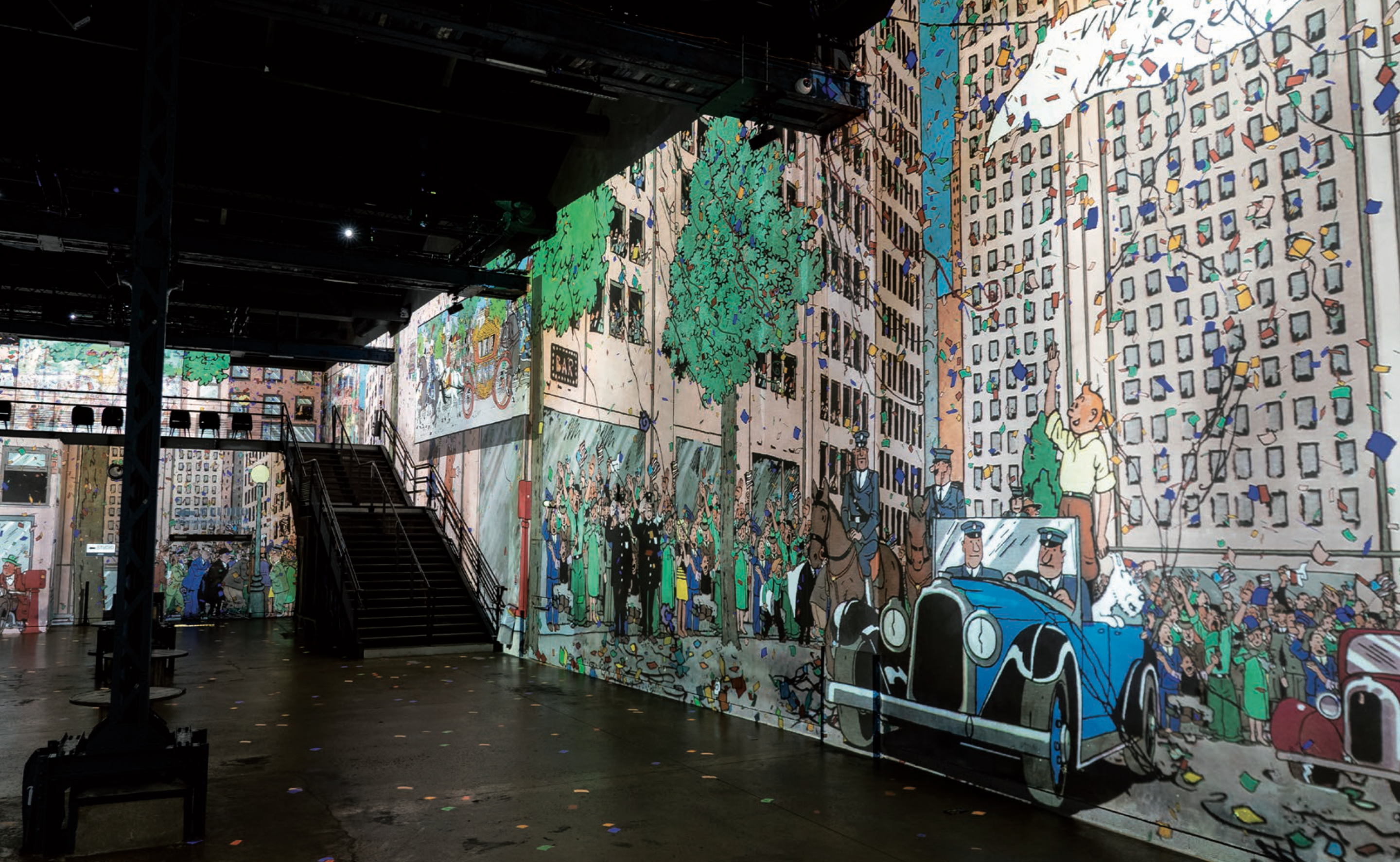 Tintin marks a stark change of pace for the Atelier, both visually and thematically. Part of the appeal of being surrounded by the animated paintings of Klimt, Van Gogh, and Cezanne is the emphasis on texture in their works which gives them a 3D effect, even before the editing team gets involved. But the Tintin cartoons are famously flat, lacking the dimensional qualities that make these other images such a natural fit for this medium.

Even so, the promotional photos for the exhibition are delightful, the images dragging viewers along on high speed car chases, giving them front row seats to kapow-filled fist fights with bad guys, and submerging them under the ocean. It’s a nostalgic feast for the eyes at a moment in time that people can’t seem get enough of indulgent camp and wistful kitsch. (See: Barbiecore, And Just Like That, and the Prime Videos’ Lord of the Rings prequel, to name only a few examples from the past year.) 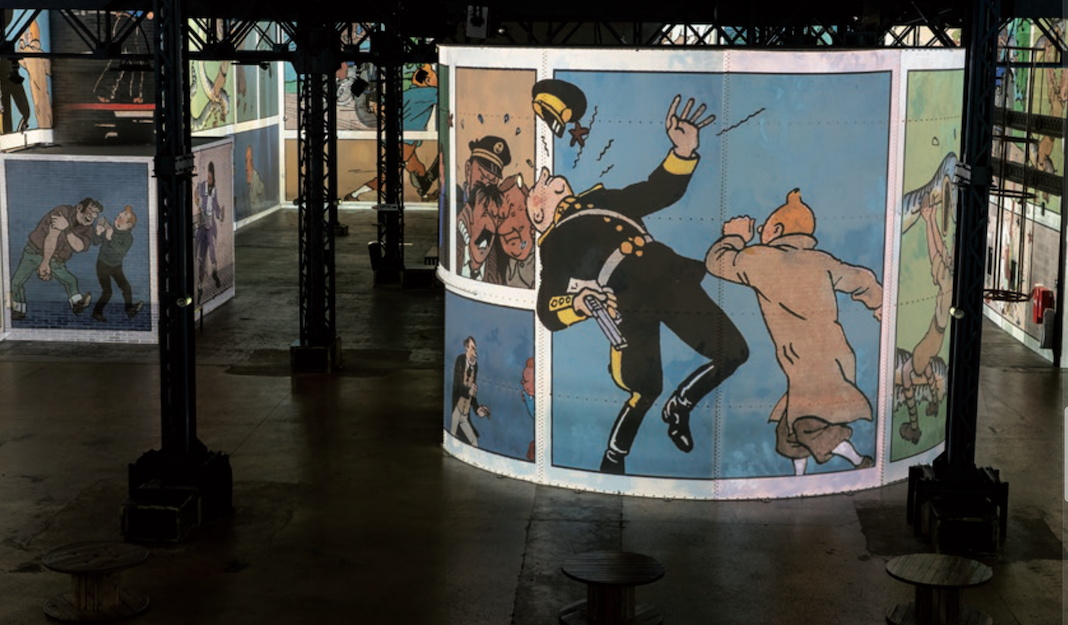 The exhibition will follow the adventures of Tintin as he travels to all corners of the world by land, air, and sea in search of the truth. He is joined by his faithful companions: his loyal dog, Milou, the temperamental Captain Haddock, the brilliant but confused Professor Tournesol, and the bumbling policemen, Dupond and Dupont. Villains of the series make their appearances as well, from the mystical Incan mummy, Rascar Capac, to the Greek-American mobster, Rastapopoulos.

Make your reservations now for October 21, before tickets sell out.