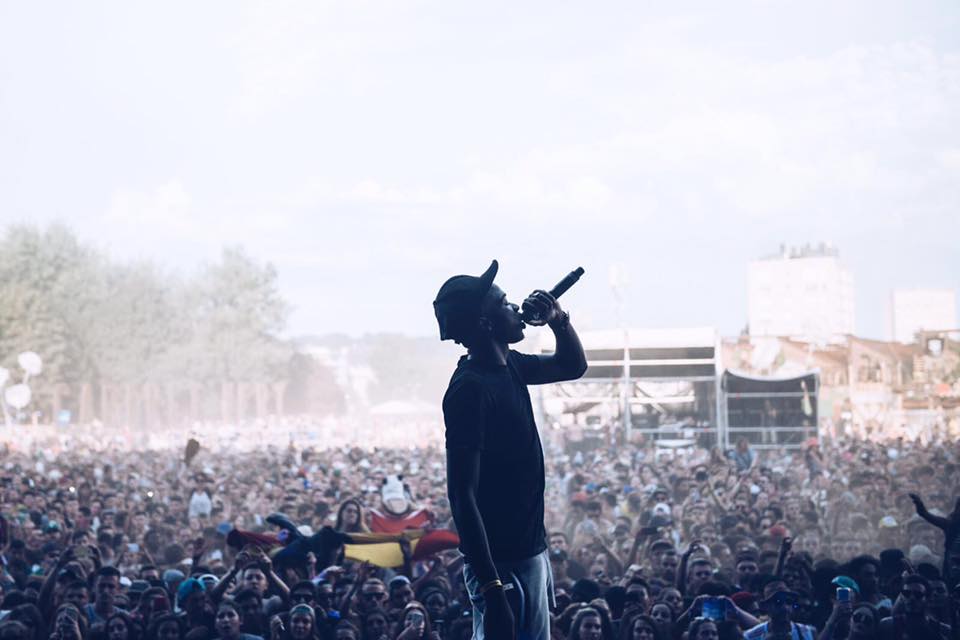 Listen to this: MHD, the Prince of Afro-Trap

With his unique mix of African and Trap influences, MHD is becoming one of the music industry’s fastest-rising rap stars.

Just 18 months ago, this 22-year-old was delivering pizzas in a Paris suburb. Since then, his 13 YouTube videos have amassed over 500 million views, his self-titled album MHD went double platinum in France, and he’s performed in Europe, Morocco, Senegal, and Guinea. His music has even become a part of soccer team Paris Saint-Germain’s post-game dance celebrations.

According to French rapper MHD, it all started with a video: “last summer, during vacation, I improvised a rap, filmed myself and posted it on social media. The next day, it had been shared thousands of times. When I went back to the projects, I wrote some new songs and we filmed them in the neighborhoods, et ça a fait le buzz.”

The string of videos – Afro Trap Partie 1, 2, 3, 4, 5 – are shot in his housing estate in Paris’s 19th arrondissement. They show MHD with his friends, dancing in the street, wearing tracksuits, sunglasses, and soccer jerseys. In one video he rides a hoverboard.

The music is rhythmic, upbeat, and good for dancing. He calls it Afro Trap, a mix of the laid-back rhythms and melodies of West Africa, and lyrical themes from Trap, a hip-hop subgenre from Atlanta. “There are so many rappers, I had to be different,” he says. “My music embodies me, it’s happy, smiling, festive; it pulls from the records of my family, Papa Wemba, Kofi Olomide, the coupé-décalé dance… I love to dance, I’m here to have fun. I have no reason to be angry.” His lyrics avoid the usual script of violence and machismo often present in rap and trap. He prefers lyrics his siblings and parents can enjoy. “Vulgarity, that closes doors,” he asserts.

MHD—an abbreviation of his birth name, Mohamed—was born in Vendée, near Nantes. He moved to an HLM in the 19th arrondissement of Paris when he was 15. His father is Guinean and his mother is Senegalese. He is the youngest of 12 children.

He’s defined himself by expressing his African and French heritage in his music: “I was listening to French rappers who peppered their lyrics with English words because they were inspired by American rappers. I did the opposite. I thought, ‘Wait a minute, I know Africa more.’”

Using words from his own language led to songs like “A Kele N’ta” (“Just Choose Her”) and “Ngatie Abedi”. The popularity of these prompted Le Parisien to publish a lexique to help monolingual French-speakers understand his lyrics. But the language isn’t a barrier to his appeal, he says: “It makes them want to go and look it up straight away. They’re curious, they want to know what I’m saying.”

MHD’s first five videos were all filmed in his neighborhood in Paris. After the release of his 2016 album MHD, filming locations expanded; the video for “A Kele N’ta” was filmed in Senegal, and “Afro Trap Part 8” was filmed in Manchester, highlighting friend and soccer player, Paul Pogba.

As a child, MHD dreamed of becoming a professional soccer player, and soccer references are abundant in his music. “Roger Milla” celebrates the former Cameroon international known for his post-goal dances. The idea for the song “Champions League” came to MHD while watching a game in a hookah bar. Being from the Atlantic coast, MHD says his favorite team is Bordeaux, followed by Bayern Munich and Paris Saint-Germain.

MHD received a nomination for Best International European Act at the 2017 BET awards. This summer MHD will play concerts in the Netherlands, Switzerland, and France before touring the US and Quebec in September.