Americans might know French actress Isabelle Huppert from her cameo role in season 3 of the hit Netflix show Call My Agent!, where she plays an upbeat workaholic incapable of saying no to a good project. But if you’re looking for an unexpectedly delightful introduction to her oeuvre, her latest project is a good place to start.

Mama Weed, the English title of the French film La Daronne, is like Breaking Bad-meets-Madame Claude. An overworked, underpaid Arabic-to-French interpreter working for the Paris police’s anti-narcotics unit, Patience Portefeux (played by Huppert), spends her days wiretapping Paris’s biggest drug dealers. (The française learned Arabic as a child thanks to her pied-noir father.) When a series of events drops a drug lord’s quantity of hash in her possession, she uses her insider knowledge to sell it, right under the nose of her coworkers and police chief boyfriend. “The dope goes straight from producer to consumer, like organic veggies for yuppies,” she cheerfully muses over coffee with her beau.

She picks two low-level bumbling weed dealers, Scotch and Cocoa Puff, as her puppets, and takes on a costume of a cheetah print headscarf, red lipstick, and oversized sunglasses, a kind of Algerian drag which both helps her blend in, and makes her the memorable and glamorous figure, La Daronne (“Mama Weed”). In fact, the sole flaw in the film might be the choice of English title. “La daronne” is rough slang for “mama,” but the film might have done better to borrow the name of its source material, the hit 2019 Hannelore Cayre novel, The Godmother (winner of the European Crime Fiction Prize and the Grand Prix de Littérature Policière), adapted for the screen by Cayre herself.

Regardless, whether she’s Mama Weed, La Daronne, or the Godmother, Huppert’s character is unlike any you’ve seen before. “What really attracted me to [the novel] was the rare combination of comedy and police thriller,” explains director Jean-Paul Salomé. “It treats the world of drug trafficking in a very unusual way, and the character of Patience is absolutely incredible… at about page three, I realized that it was Isabelle Huppert who had to play Patience.” From the onset, our heroine wears the cool, implacable face of the interpreter: a mouthpiece without thoughts or opinions of her own. But it quickly becomes clear that there’s more to her than meets the eye. A mysterious photograph of Patience as a child leads to an anecdote about her smuggling her mother’s money to Switzerland inside a stuffed dog. She drops little tidbits along the way, like the fact that her deceased conman husband is buried in Oman, and left her swaddled in debt. Patience is hungry for adventure, for an escape from the dreary rigor of her 9-to-5, her lukewarm romantic relationship, and the costs required to take care of her ailing mother (played by Liliane Rovère, who you may know as Arlette from Call My Agent!). “She refuses to live by the codes of today’s society,” says Salomé. “This is a fantasy a lot of people have, but we don’t always have the courage to act on it.” 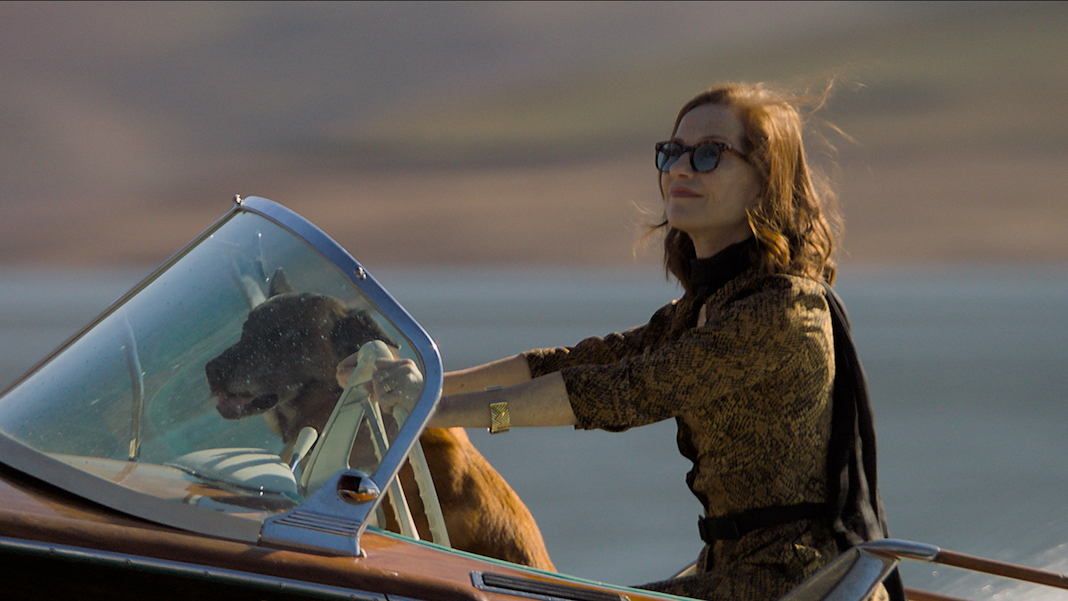 Huppert is marvelously funny, showing a playful side to her that is thoroughly underutilized in her other films. “I thought, it’s been a long time since we’ve seen her in something funny like this…. It’s got this approach that’s both amused and amusing,” Salomé says. The comic aspect of this unusual police thriller is what makes the film sing, and it’s something Salomé put in the work for: “I want people to take away the mix of genres, the emotion, suspense, comedy, liveliness… I think that mixture is very important, because that’s what humanity is.”

Showcasing a contemporary vision of Paris was also important for the director. “I was discovering the neighborhoods of Ménilmontant and Barbès, because I lived there for three years. When I arrived, I realized that I wanted to make a film… that showed this neighborhood and the more disenfranchised members of Paris on the edge of society… I wanted to show them as they are, but without judgment… having lived there for several years, I thought that I could do this without caricaturing. I wanted to show reality, but with a touch of humor.”

At its heart, though, Mama Weed is a deeply empathetic film about what women do to survive in a society that underappreciates and underestimates them. “People never listen to women,” says the character Kadidja early on in the film. And that statement seems to set the tone for this story full of complicated women pulling strings behind the scenes, profiting from their anonymity, and refusing to follow the paths set for them.

“Making a comedy, it’s very amusing, very difficult,” says Salomé, “but to also succeed in touching people, and showing a contemporary version of Paris, this is what I hope to accomplish with Mama Weed.”