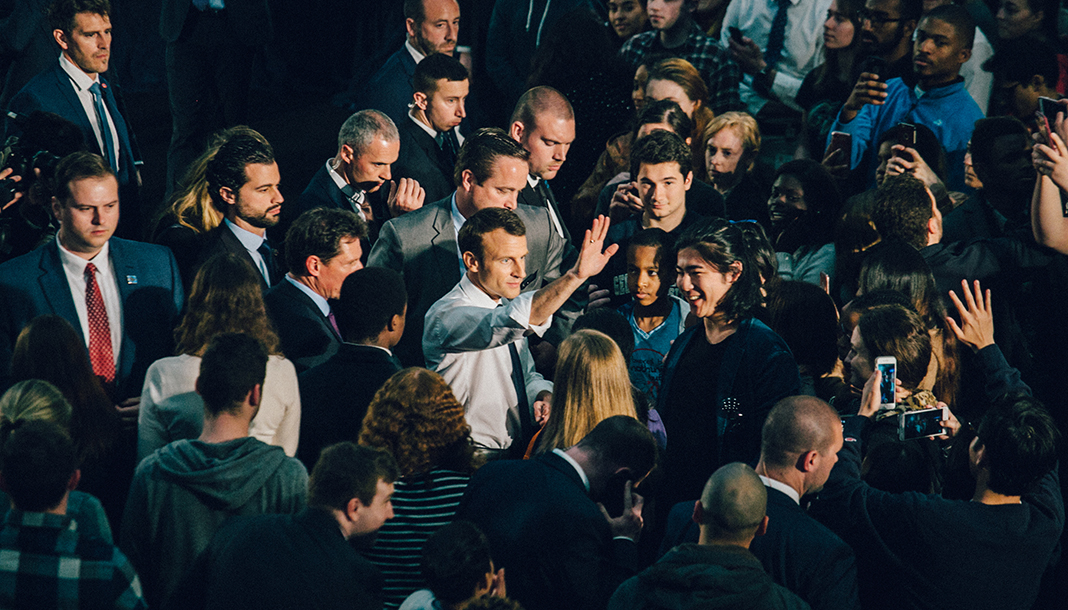 In the arena of George Washington University’s Charles E. Smith Center, 1,200 students eagerly awaited the French star of the day, who was about to take part in a very American event: the town hall. Arriving at least three hours early, these students — chosen from of a lottery of 5,000 entries — were going to ask French president Emmanuel Macron questions.

Earlier that day, as a part of his official state visit, Macron faced the entire United States Congress. At this international university, the Macron is on already conquered ground. “He is very charismatic and honest, very transparent about what he thinks on different subjects,” explains Sarah, a 4th year student at GW. “By being transparent from the very beginning, he can communicate with everyone. That’s why Americans like him so much.”

Walking across the Foggy Bottom campus from his lunch at Tonic with Representative John Lewis, Macron was repeatedly by students who wanted to speak to him. He answered questions, shook hands, and signed a few autographs, just as he did after the town hall.

Once in the arena, his jacket shed, a smiling Macron was welcomed by a sea of students holding up their cellphones. He rolled his shirt sleeves up, just as American politicians tend to do in intimate settings, and invited young people to “be direct” and ask with “no filter.” For 70 minutes, the president was questioned on a variety of subjects, from AIDS to his policy in Africa, Syria, strikes in the United States and Syria, antisemitism, terrorism, immigration, trade wars, and even his relationship with the Dalai Lama.

Macron not only answered their questions, he tried to get an important message across to the young people before him: “Let’s disrupt the system together.” In his speech, he urged the students to forge their own paths and create solutions. “You are here to listen to your teachers, but tomorrow, and even now, you are also here to take your own responsibilities.”

He told them, as a part of the generation who decides for themselves, they should question the aspects of the world that bother them, “their frustrations,” that they see as wrong. “Don’t believe those who say that’s the rule of the game, don’t question the rules of the game, it’s always been like that, you have to follow these rules. That’s bullshit,” he says, letting a grin slip out as laughter and applause spread throughout the room.

He also gave them warning: “Your generation will have tremendous challenges: your economic situation, current inequalities, our planet, the current instability in geopolitics. We will do the best to provide some answers, but at the end of the day you will be the one to decide.”

This is not the first time that the French President has tried this exchange exercise with young people. He met with students in Burkina Faso and India during trips to Ouagadougou and New Delhi. 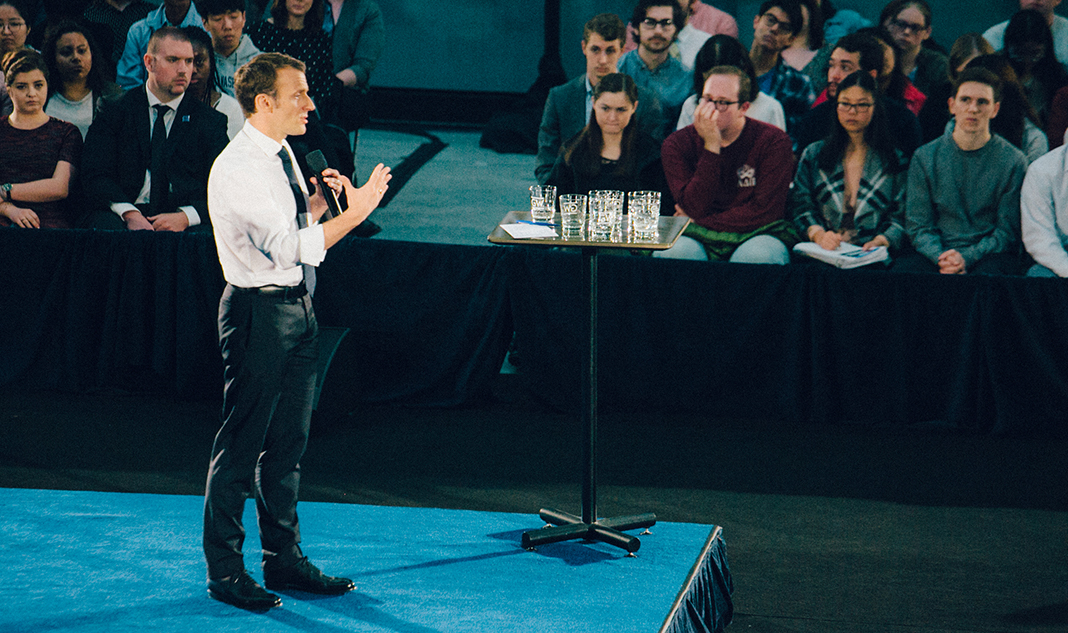 At GW, more than one person compared him to another political icon of America’s youth: Barack Obama. “He gives off the same vibes as Barack Obama, because he’s also young and listens to young people,” comments Minah Malik, a 4th year student. “You don’t really see that in leaders today.” Kristen, a PhD student at GW, agrees with her peer. “He took some extra questions. It showed that he was willing to talk to us, like Obama would’ve done. His positions on climate change are also similar to Obama’s.”

Students Shuba and Michele also find similarities between the former Democratic president and the French president. “The fact that he urged people not to confuse terrorists and Muslims is reminiscent of Obama,” Michele says.

After his final words and the applause had died down, he told the rapt crowd, “Now it is yours. You shall overcome, for sure.” He departed the stage; his official state visit was over.