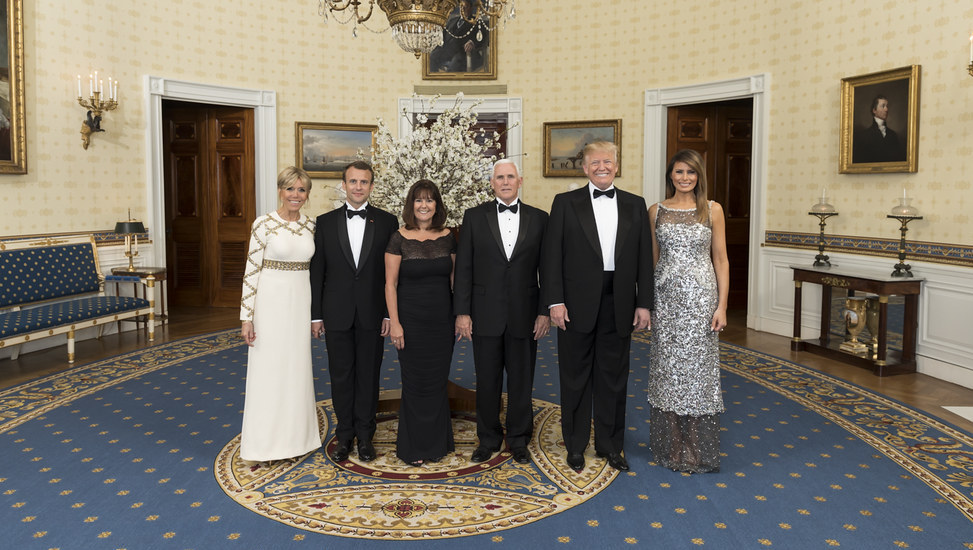 Everything that Happened at Last Night’s State Dinner

Last night, French president Emmanuel Macron and American president Donald Trump enjoyed the first official U.S. state dinner under Trump’s mandate as president. The two men and their delegations celebrated the Franco-American friendship, and toasted to the continuing strength of their ties.

Trump’s toast was, largely, a history lesson. Recounting a brief history of the Franco-American friendship, he started with the revolutionary war, and moved through the French Revolution and each World War. Author Victor Hugo and general and former French president Charles de Gaulle were quoted.

He ended with a toast to the relationship between the two countries: “May our friendship grow even deeper,” Trump said. “May our kinship grow even stronger. And may our sacred liberty never die.” And finally, “God bless you. God bless France. God bless our alliance.  And God bless America.”

Now, if Trump’s toast was about the past, Macron’s looked to the future. Though his toast was heavily laden with references to the two nations’ collaborative history, he focused more on their ability to work together toward shared goals. He said that their shared values are “the reason why our military took legitimate action a few days ago” and “why we will work for stability and to preserve our values.” It was quite a politically tinged comment for such a casual setting, referencing the recent unilateral decision by the leaders of France, the US, and the UK to launch airstrikes against Syria. The legitimacy of the airstrikes has been questioned since the heads of state didn’t seek approval from the national governing bodies.

To finish his toast, Macron asked everyone to raise a glass to “all our fellow citizens on both sides of the ocean who fought for our values,” to being “up to the debt that we owe them, and up to their sacrifice,” and “to the unbreakable friendship between France and the United States.”

Melania Trump nodded to France with her fashion choices, wearing a Chanel haute couture dress, hand-painted with silver and embroidered with crystals. (And, though this hasn’t been confirmed, it looks like there are pockets on the front.) She also sported a black Givenchy tuxedo cape and custom-made Hervé-Pierre hat, paying tribute to two more French designers. Brigitte Macron wore Louis Vuitton, a fitting choice, considering that Bernaud Arnault, the CEO of LVMH was a part of the attending French delegation.

“It is a huge honor for me to see Brigitte Macron wearing my designs while on this trip,” Nicolas Ghesquière, the artistic director of Louis Vuitton, told The New York Times.

Vice President Mike Pence and his wife Karen, other members of the Trump administration, and leaders in business and tech were among the 130 or so attendees. CEO of Apple Tim Cook, Managing Director of the International Monetary Fund Christine Lagarde, and media mogul Rupert Murdoch were a few of the big names present. According to Bloomberg, eight of the world’s wealthiest people attended the dinner. In a shift from the Obama years, celebrities were cut from the dinner’s guest list.

The Macrons were the last to arrive at the North Portico, greeted by the Trumps. Each of the men and women exchanged double cheek kisses, just as one would do in France.

The Washington National Opera from the John F. Kennedy Center for Performing Arts, the evening’s entertainment, scored the Trumps and Macrons arrival at the dinner with tunes from An American in Paris, by George Gershwin, and the French military march.

More hugs and kisses as the Trumps welcome the Macrons back to the WH for the State Dinner in their honor. pic.twitter.com/Xz2LtBFkOv

Of course, there were some Francophiles in the room. Ivanka Trump announced that “oui,” she speaks French “un petit peu,” leaving Francophiles and Francophones wondering, but how much and how well? Treasury Secretary Steve Mnuchin’s wife Louise Linton, who has made a name for herself by way of her love of luxury, wore Cavalli (an Italian designer), declared that she was looking forward to “everything French.”

In case you've forgotten tonight's menu at the State Dinner: silence of the spring lambs: pic.twitter.com/AMulNrMIiv

For Melania Trump, who has been somewhat recreating the role of First Lady, this was the moment to shine. She had been personally overseeing the dinner’s planning for several months, as documented on her official White House Instagram and Twitter accounts. Over 1,000 cherry blossom branches decorated the Cross Hall, while the State Dining Room featured white sweet peas and lilacs. The china place settings from both the Clinton and Bush (H.W.) presidencies were chosen to align with the cream and gold color scheme of the evening. Guests were treated to a dinner of American classics with French influences, like lamb, jambalaya, and a nectarine tarte with crème fraîche ice cream.

Looking ahead to tonight’s #statedinner @ the @WhiteHouse here is my piece on the dinner tonight. @FLOTUS has such an appreciation for details & history the night will be elegant, intimate & well executed by her #EastWing team #francestatedinner #history https://t.co/j8Yyv0UnDp pic.twitter.com/vkJjpBb2us