“Film Noir” was coined by the French film critic, Nino Frank, in 1946 to describe a style of Hollywood crime melodramas, mostly based on hard-boiled crime fiction that was populated by tenacious cops (flics), cool gangsters (bandits), and femme fatales. The French elevated the genre to an art form that holds an important place in cinema history, and has played no small part in perpetuating a mythical Paris that occupies our collective perception of the city.

French film noir captures Paris in the 50’s and 60s with its gritty cobble-stoned streets, dim street lights and combines low-key simmering tension, existential angst, and the eroticism of striking actors like Jeanne Moreau, Jean Gabin, and Jean-Paul Belmondo silhouetted against the light and shadows of Paris at night.

As the days get shorter, the nights longer, and the streets fade into a black-and-white world punctuated with the occasional colors of  an orange pumpkin, a flash of red leaves, and early holiday lights, this is the perfect season to settle in, pop some corn and binge on these delicious cinematic trifles. 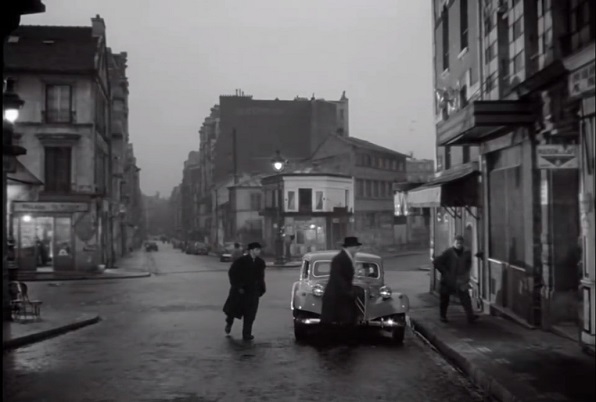 Elevator to the Gallows was twenty-four-year-old Louis Malle’s feature film debut and considered a lynch-pin of French New Wave cinema. Miles Davis’ brilliantly improvised jazz soundtrack perfectly complements the hand-held camera work, location shooting, and natural lighting to create an atmosphere that reflects the dark side of human nature and the dizzying randomness of events that spin out of control.

The plot is pure noir: Woman (Moreau) married to wealthy industrialist, plots with her lover (who is the husband’s protégé) the “perfect crime” to rub-out the husband. True to the existential pessimism that is a hallmark of noir, a stolen car, a chance encounter, a gun in the glove compartment, and an elevator break-down all set off a cascade of unanticipated events that are heightened by Davis’ wild jazz riffs. Watch here.

Melville is one of the undisputed “Grand Masters” of French cinema, and film noir in particular. Just released from prison after a six-year stint, Maurice (Belmondo) bumps into a crooked pal who invites him to join the next day’s job. What follows is a maze of double and triple crosses, bum-steers, snitches, and murder. (In other words, your typical noirish menu of mayhem.) Earning the name, Noir, the fog shrouded nighttime scenes, especially the ones under the street lamps outside a decrepit gangster’s shack on the outskirts of Paris, are filled with foreboding. Watch here.

Even though it takes place outside Paris, it’s so wonderfully chilling I had to include it. This is the ultimate psychological thriller-horror film that Alfred Hitchcock wanted to make, but film-maker Clouzot optioned the story first.

In a creepy run-down boys’ boarding school, Christina (Clouzot), the bullying head-master’s tormented and sickly wife, plots with her husband’s mistress, Nicole (Signoret), to commit the perfect crime and bump the despicable hubby off.  Oozing with malevolent atmosphere, dark hallways, creaking floors, and devilish plot twists, this is the grand-daddy of the “but-I-swear-it-was-right-there” fright flick. Even after you’ve seen it and know the story,  it never fails to shock, spook and delight. Now, that’s the sign of a true classic. Watch here. 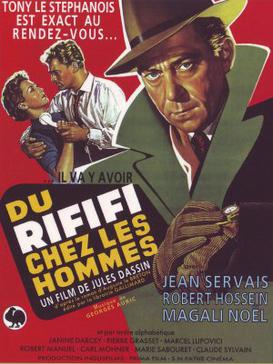 After learning that his girlfriend has jilted him, our just-out-of-jail and world-weary protagonist, Tony (Servais), is finally coaxed into joining a gang of thieves to pull off the “perfect” smash-and-grab jewelry heist (another Noir staple.) The epic twenty-eight-minute scene where they break through the floor of the apartment above the jeweler’s shop has no dialogue or sound besides the careful tapping of the hammer and chisel. Things take one bad turn after another after the not-so-perfect crime in this nearly perfect film noir. Watch here.

Before his budgets allowed him to make films with Belmondo and Delon, Melville made Bob le Flambeur, which, a half a century later was remade as Ocean’s Eleven.

Bob is the personification of cool, with a slot machine in his apartment which he plays, and wins at, every evening before heading out. Bob sports a perfectly coiffed striking white shock of hair.

A former bank robber, Bob is an inveterate gambler whose twenty-year-streak of good luck seems to be tapering off, when he decides to pull the (yes) “perfect” heist, ripping off the casino of Deauville where he’s a croupier. There are terrific scenes  shot on location in and around Montmarte, with an almost wistful ease and candor as we follow the nocturnal Bob from dusk, through late night, and into dawn when he heads home just as Paris is rising. Watch here.

With both Jean Gabin, (who has been called the “Humphrey Bogart of France”) and Lino Ventura, Grisbi boasts the two top leading men of film noir. That means double the trouble and double the fun. There are some great late-night scenes on the streets of Pigalle, lit by the patchwork of nightclub neon signs, so crisp you can feel the cool Paris night air sizzling with danger.

Max (Gabin), an honorable gangster, has stashed eight bars of gold his gang recently stole, and Angelo (Ventura), a deceitful double-crossing crook, wants to get his hands on the loot. He’s a bad-guy so despicable you love to hate him. The debonaire, even-keeled gangster with eyes so blue they seduce the audience even in black-and-white, Max is hard not to like. So is this film. Watch here.

Elevator To The Gallows