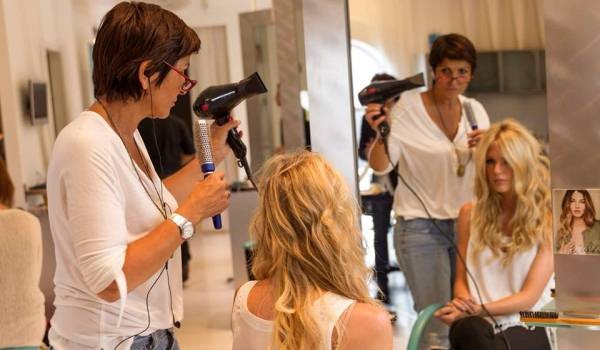 Léa Journo’s Love Affair with Hair from Paris to L. A.

If you’ve admired a celebrity hair style within the past ten years, it just might have been Léa Journo who created it. From Brad Pitt and Orlando Bloom to Ellen DeGeneres, Jennifer Anniston and Natalie Portman, the celebrities who’ve entrusted their coifs to Journo are many. “I think they appreciate my honesty,” says Journo between drags on a cigarette, “It’s rare in their business.”

We are sitting by the pool at the Beverly Wilshire Hotel (sound familiar? They filmed Pretty Woman here) where Journo has had her salon for the past 3 years. She is far from the first French beauty professional to win the hearts of Hollywood: Marilyn Monroe had Madame Renna, and French names have always been at home on famous beauty and luxury brands. But more than a brand or an entrepreneur, Journo is an artist.

“I dare to tell people straight up what will and will not look good on them,” she declares, “I have no limits. Each time, I have a precise idea of what I am going to do and I see it through to the end, like when I cut Jane Fonda’s hair very short,” she says with no small amount of pride, referring to a hair cut that created a bit of buzz around the celebrity.

Journo knew hair was her calling from a very young age. “It’s probably a gift from God!” she says. The youngest of ten children, she was born in Lilas just across the péripherique from Paris and grew up in the 20th arrondissement. “As a child I used to stare at women in the street and imagine hair-dos that would look better on them,” she laughs,”much to my grandmother’s chagrin — she was mortified!”

When Journo was 13 she became an apprentice in a Parisian salon and quickly moved up the ranks. At 21 she won the grand prize at the World Hairstyle Competition in Cannes and at 24 she opened her own salon in Paris called “Lea Saint Karl.” It was a huge success. “Sergio Bossi, who had about a hundred salons all over the world, asked me to become his artistic director after that,” says Journo, “I got to work training a whole lot of hair stylists, all over the planet.”

That’s when the Beverly Wilshire Hotel spotted her and asked her to open her own salon on the premises. “I started the whole adventure in June of 2003. It was hard at first,” remembers Journo, “all I had were hotel guests who wanted to have their hair washed!” But sure enough, word got out and her star-studded roster of clients began to grow. “It all started with Britney Spears,” she says, “after that it never stopped.”

Journo’s plans for the future are far-reaching. “I’m opening a new salon in Texas this year, and later it will surely be Dubai and New York,” she says with enthusiasm. But she insists that no matter how big she gets, the objective remains the same. “With me, everybody is in in the same boat: when Brad Pitt comes to get his hair cut he can be surrounded by perfect strangers,” says Journo, “Whether it’s him or the cleaning lady, I put the same effort into making everyone look beautiful.”

The cleaning lady would have to be making a mint, though — a Léa Journo hair cut can start at three figures.