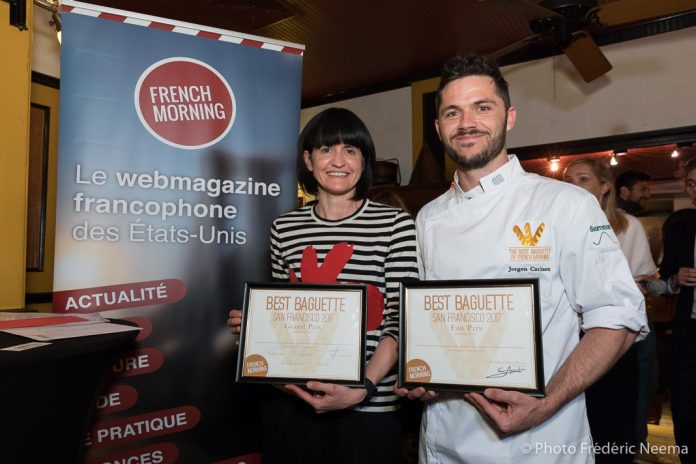 Bread lovers from all across the Bay Area flocked to Le Colonial on May 10. The occasion? To choose the best baguette in San Francisco.

With more than 250 people attending, the eager crowd filled Le Colonial to the brim. Navigating the packed restaurant, guests sampled the goods of the four finalists: Jane the Bakery, Le Marais, The Midwife and the Baker, and La Fournée. The baguettes were the highlight of the night of course, but the specialty breads were a close second. Bread flavored with olives and polenta, classic French pain au chocolat, brioche salées with duck fat, and pain au blé de Khorasan (wheat from the Khorasan region in northeastern Persia), all accented with slices of fromage and charcuterie, washed down with sips of wine.

In one corner of the room, the jury, composed of restaurant industry professionals, began the blind taste-test. Meticulously, they feel, smell, break in half, and taste each bread. “It’s out of the question to eat cheese, pâté, or have a glass of wine while you’re judging,” explained Laurent Manrique, a Michelin-starred chef and the president of the jury. “Only some water, for really sensing the different flavors of the bread.”

The other members of the jury taking up the challenge were Geoffroy Rabe (chef and owner of the French restaurant Cuisinett’ in San Carlos), Nick Ronan (chef and owner of the French restaurant Bisou and the catalan restaurant Beso in San Francisco), Véronique Khérian (photographer and creator of the blog Miss Cheesemonger), and Pierre Bee, (founder of the hotel directory l’Apéro). Manrique took a moment to explain the process of selecting the best baguette: “First you look at appearance, you check if the baguette is the right shape, if the ends are cooked through. Then you look for the color of a well cooked bread—not too dark, not too light. As for texture, you look for the crust. With the level of humidity in San Francisco and such chalky water, it’s very difficult to make baguettes with a crust.”

At the announcement that voting would close in twenty minutes, murmurs of protest swept through the room. Having spent so much time savoring the breads and talking with bakers, attendees needed more time to taste every bread. Many wanted to taste each bread several times, but it came time to make a choice.

With the votes counted, the first prize of the night was awarded by French Morning readers. A thunder of applause boomed quickly after the announcement that Jane the Bakery had won the Readers’ prize. The second prize awarded was to the Best Specialty Bread. Lead by Mac MacConnell over in Mountain View, The Midwife and the Baker took home the award for their sourdough bread, accented with sesame seeds. “It’s our most popular product,” explained the baker. “It’s the one we sell most at the markets where we set up shop.”

Jane the Bakery received the Grand Prix, as awarded by the jury. Amanda Michael, creator of the San Francisco bakery, could hardly believe it. “We worked hard every day, and this public recognition is the best reward. It’s a great honor to have been chosen from a group of such excellent boulangeries, both by the public and a jury of professionals committed the the French culinary traditions that inspire us.“