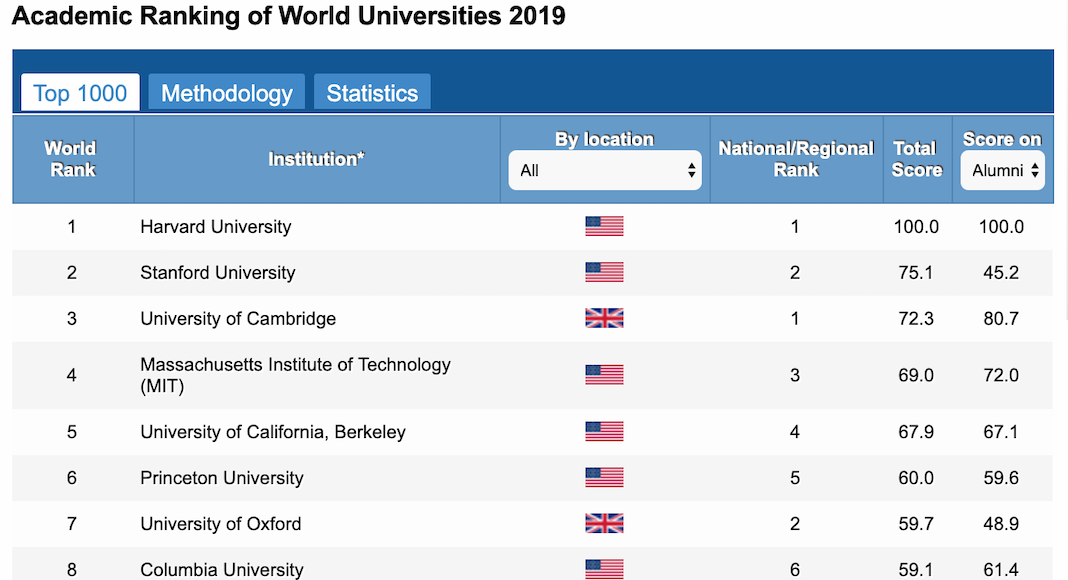 French Schools Rank Low on Shanghai Rankings’ Top Universities. But Are They Bad or Misunderstood?

The latest Academic Ranking of World Universities, commonly known as the Shanghai Ranking, was published last week, and once again France is disappointed. Headlines across the country use the same words: France “lags behind,” they say, with only three universities in Shanghai Ranking’s Top 100.

It’s no surprise to see Harvard, Stanford, and Oxford rated highly on the list of the world’s 1,000 best schools, but what about French universities, like the Sorbonne, one of the oldest and most famous in the world? Or Polytechnique, the training ground for French presidents and corporate moguls? Of those two prestigious institutions, only the Sorbonne made it into the Top 50, with two of its branches landing at 37th and 44th place, just below the University of British Columbia and the University of Minnesota, respectively.

The Shanghai Ranking considers a number of factors, including Nobel Prize winners produced by the school, the number of papers published in Science and Nature, and how many “highly cited researchers” a school has. University presidents around the world wait nervously for its publication every August.

French critics go further, noting that the emphasis on research works to the detriment of France. This is because the kind of research that is done in American universities is often done in specialized institutions in France. As Timothée Toury of the University of Troyes points out, “Large organizations like CNRS, INRIA and INSERM, which conduct half of French research, are left out” of the Shanghai Ranking.

Hugo Harari-Kermadec, author of What Shanghai Has Done to French Universities, has a different concern. He notes that, like in the United States, France’s top schools draw their students disproportionately from the upper reaches of French society. Directing more resources to those schools will mean less money for the schools that serve students of more limited means. This, in turn, will “indirectly reinforce the social polarization of the university system,” and thus social inequality.

Despite these criticisms, France has taken steps to improve its position. The first Shanghai Ranking in 2003 was an “electroshock” to the French educational establishment. In reaction, French President Sarkozy launched IDEX, the Initiative d’Excellence. This encourages universities to join together to create larger institutions with greater resources, and more government money flows towards these bigger schools. Strasbourg was the first to act, melding its three universities into one school, and Bordeaux, Marseille, Grenoble, and Lille have since followed suit.

Just this year, the University of Pierre and Marie Curie joined forces with Paris-Sorbonne to create Sorbonne University (one of the University of Paris schools in the Sorbonne system), which was one of the three French schools to crack Shanghai’s Top 100. Even more ambitious is Paris-Saclay, a combination of seven different universities that will open its doors in January. The school has received government support to the tune of $1 billion and hopes to enter the Shanghai Ranking between the 10th and 20th position.

The effect of these changes has so far been limited. In the 16 years since the list’s launch, France has gone from two universities in the initial Shanghai Top 100 to only three today. But as Pierre Mutzenhardt of the University of Lorraine notes, “This is a long term project. If we had done nothing while the rest of the world moves forward, we would be in a much worse position.”

Meanwhile, the Ministry of Higher Education expresses cautious optimism. Minister Frédérique Vidal’s recent press release congratulated the country on ranking 6th overall in 2019, with 21 schools in the Top 500. At the same time, she grumbled that “some” ranking criteria “do a disservice to French universities.” On Twitter she complained that teaching is not considered in the rankings.

But she’s smart enough to look ahead. Her press release ended with a helpful reminder to researchers on the best way to publish articles, so as to improve their school’s rankings. One has to play the game, after all.