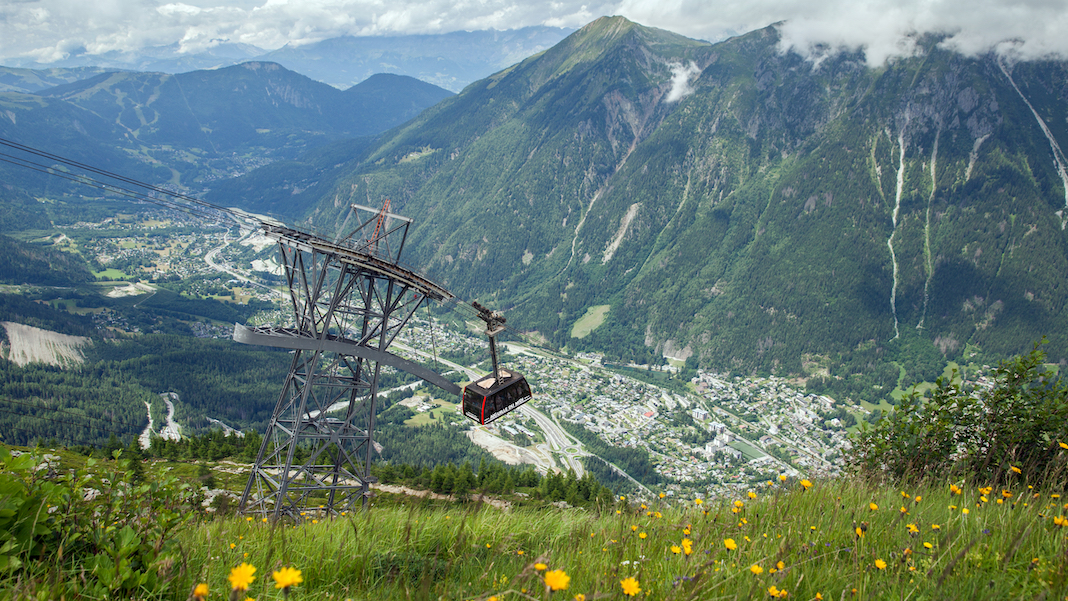 France’s Most Epic Ascent: the Cable Car on the Aiguille du Midi

For those of us not ambitious enough to hike the Tour du Mont-Blanc, the neighboring Aiguille du Midi mountain, with Europe’s highest cable car, is the best alternative to get you high (literally). Without having to hike or climb, one can reach a 3,842-meter peak on the Mont-Blanc massif (mountain range). It’s the closest you can get to the summit of Mont-Blanc without breaking a sweat.

While the Aiguille du Midi is open year round, it is most fun in the summer when the temperature is at summer levels at the base and it’s snowing at the summit. There is then the option to hike back down the mountain from the midpoint of the lift, through the Alpine fauna and flora, to the base village of Chamonix. Athletic-activity central, Chamonix offers biking options, jogging paths, and a plethora of other activities amongst dining, shopping, and spa entertainment.

The Aiguille du Midi is a peak beside Mont-Blanc, the tallest mountain in Europe. It takes two cable car lifts to reach the aiguille (peak) which features a direct view of the summit of Mont-Blanc. Summer cable car prices vary but are about 63 euros roundtrip for an adult, and 50 euros one way if you chose to hike back down. There is also the option to arrive at the mid-station only for 33.50 euros roundtrip or 17.50 euros one way (see prices here). Be wary, despite a price that is a bit hefty, the summit is extremely popular so it is best to arrive early and take one of the first ascents (see schedule here).

The midpoint of the lift stops at Plan de l’Aiguille, at 2,317 meters. It is an access point for off-piste skiing in the winter, and hiking, rock climbing and paragliding during the warmer months. After exploring the summit, you can return here to walk down the rest of the trail (about a three-hour hike depending on your speed).

The second half of the cableway leads you to the top of the Aiguille du Midi, on the north face of the Les Pelegrins glacier, 3,778 meters high. Footbridges and tunnels connect the peak’s collection of terraces, a cafe, and other vantage points you can enjoy at the top. The ultimate adrenaline rush is the “Step Into the Void” installation, featuring an an entirely glass box that hangs off the side of the mountain, creating the illusion of falling. (Tip: when you arrive at the summit head to the “void” first to avoid lines.)

The Aiguille de Midi’s cable car is notable itself. It attracts 500,000 people each year, and holds the world record for the highest vertical ascent of any cable car.

The first plans of the Aiguille du Midi cable car date back to 1905 when two Swiss engineers projected a plan to link the town of Les Pelerins and the summit. The project was sidelined until Funicular Railways, a French company, opened the first section of cable to Les Pelerins in 1924. They would complete the second section three years later and the cable cars would be the highest in the world for the next two decades. However, the popularity of Aiguille du Midi diminished during World War II and it was ultimately closed.

The cableway as we know it now was fully renovated and finished in 1991 by an Italian engineer. The base station at Chamonix, the most recent change, was reconstructed and opened in 2012. We can now see ice climbers enjoying the glaciers at the summit, bikers riding down the mountain face, and even good-ole hikers. Everyone from children to adults come up to see the one-of-a-kind view that has transformed our vision of Mont-Blanc. And while it is only one of the activities in Chamonix, it is truly a bucket-list worthy experience not to miss.