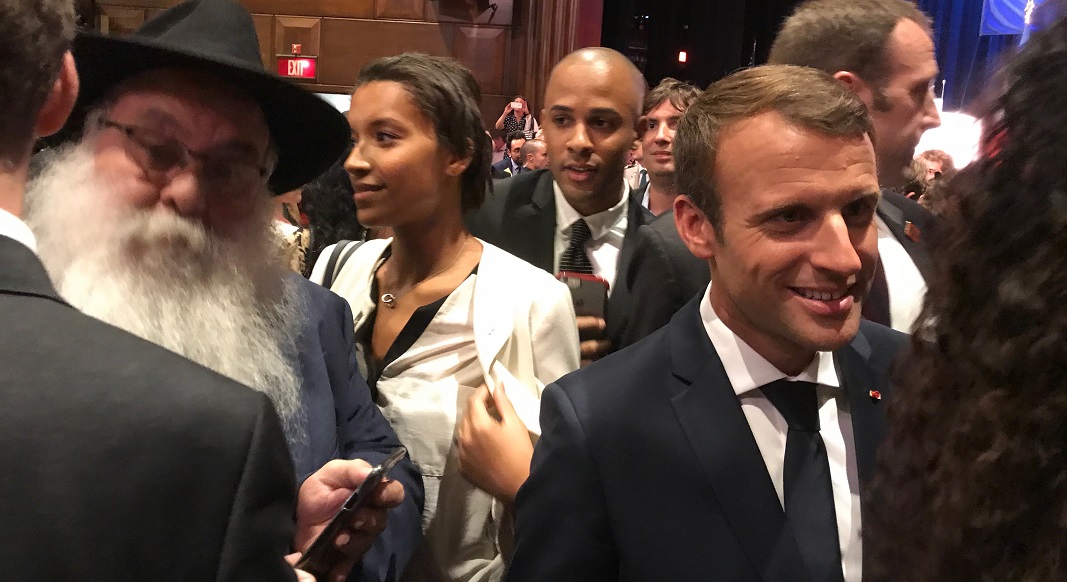 Emmanuel Macron Tells French People in NY to “Come Back”

Those looking for a big French fête would have been disappointed; there weren’t petits fours or drinks at the meet-and-greet of French President Emmanuel Macron and first lady Brigitte Macron with the French community of New York on Tuesday. Far less glamorously, the presidential couple wound their way slowly through hoards of fans at 92Y, seeming much more like celebrities meeting groupies than politicians.

You could hear calls of “bravo,” “merci,” and “bon courage” while the president gamely took selfies with his fans and Brigitte chatted with one of her old students. “For the first time, I’m hearing a president that speaks to me,” said a French woman of seeing Macron.

“As an American, we don’t have a head of state that seems very sane. For me, Macron is my president,” declared Victor, a 17-year-old French-American who came to the meet-and-greet with his friends from the Lycée français de New York.

Plagued by a sinking popularity in France, the president was in safe territory among the French of New York, whom he visited during the campaign to fundraise. In the consular voting district, which includes New York, New Jersey, Connecticut, and Bermuda, he received 52% of votes in the first round of the presidential election, and 95% in the second.

During his speech at 92Y, the new inhabitant of the Elysée palace drew on themes from his campaign and his speech a few hours earlier in front of the General Assembly of the UN. In front of the 900 handpicked guests, and a collection of ministers and past ministers,  Macron defended “the reinvention” of Europe, spoke of “France’s special role” in  “reinventing” international relations, and listed the “transformations” that he wants to put in place in the fields of work and education. He unintentionally made the audience laugh when he said he wanted to end the “rule of law” this coming November, referring to the state of emergency France has been living under since November 2015.

Even if he didn’t touch on the problems affecting French people abroad like the absence of internet voting for legislative elections or the controversial questions around the tax system, he alluded to the concerns sparked this summer by budget cuts affecting mostly the Ministry of Foreign Affairs and education scholarships. “I’ve confirmed all the appropriations for the 2018 year so that schools and all our educational and cultural outreach will not only be maintained, but can reach more ambitious levels. This is the joint-battle of the two ministers in front of me,” said Macron, alluding to the Minister of Foreign Affairs, Jean-Yves le Drian and the Minister of Education, Jean-Michel Blanquer.

“Come back, spread your knowledge, exchange ideas. Come to conquer! The place of conquest today is France. The spirit of conquest is renewed,” Macron told the crowd, a group of mostly entrepreneurs. “And for those who want to stay in the US… we’ll be by your side, so that you’re proud of your country, and your children are well educated here.”

It seems unlikely many French will be booking a one-way ticket home. “His politics might convince the French to participate in this transformation, but to return to France, I doubt it. We have our families here, our way of life, our jobs,” affirmed Richard Ortoli, consular advisor and president of the board of directors of the New York French American Charter School in Harlem. “But getting more involved? Certainly!”